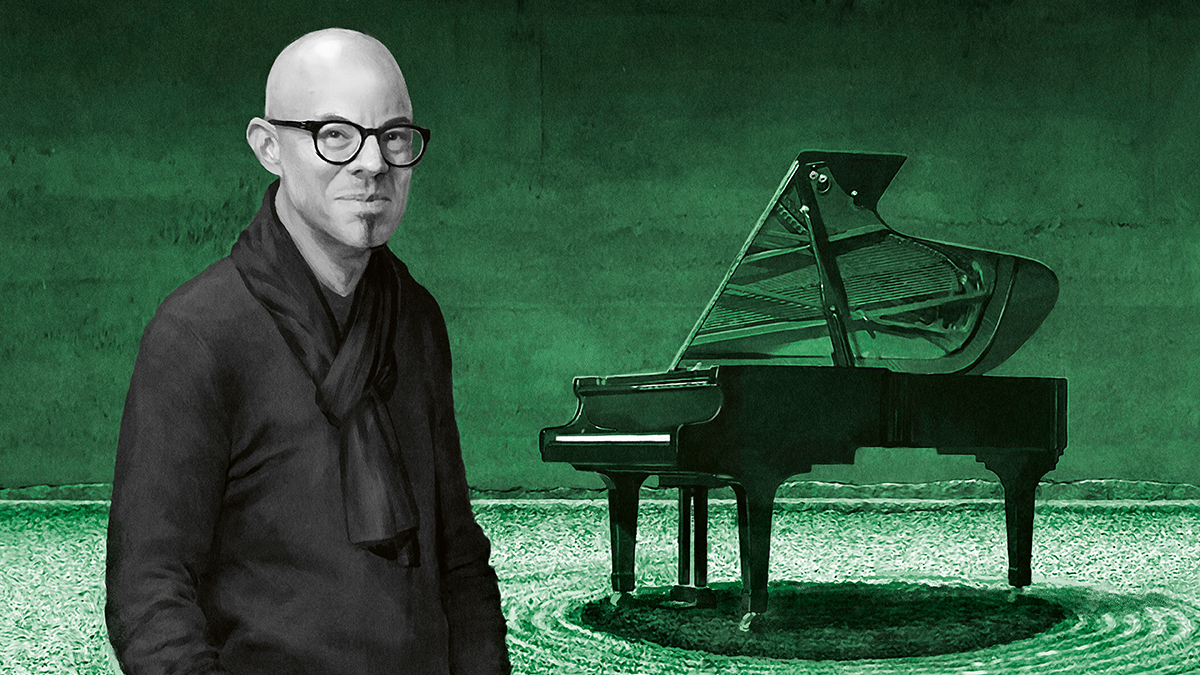 In normal times, jazz musician Nik Bärtsch would be on the road. St. Petersburg, New York or Nijmegen are just some of the prestigious concert venues where the restless jazz pianist performed in 2019. With his groups, Ronin and Mobile, the bandleader normally gives performances all over the world, and of course in his hometown of Zurich as well as throughout Switzerland. “I would say we give about 60 international concerts a year,” Bärtsch estimates – and that doesn’t even include his regular Monday concerts at the Exil club in Zurich, of which he is a founding member.

At the moment, however, nothing is normal. Bärtsch can be found via Zoom behind his desk at home rather than in the concert hall. A black grand piano dominates the room, and sheet music is piled on an e-piano – this is obviously where work is done. The coronavirus pandemic has forced the musician and composer to work from home, though the father of three daughters can also look on the bright side. He is able to devote more time than usual to his family, compose – and write: “At last I’ve managed to organize my papers of recent years,” says Bärtsch. To be precise, the successful musician is writing a book on his own aesthetic, due to be published in the spring. “I’ll be turning 50 this year and think this is the right moment to take a deep breath, consciously assess my career, and to use the results for upcoming projects,” he says.

This professional musician’s fondness for writing is connected with his studies at UZH. Having earned his diploma as a pianist from Zurich University of the Arts, Nik Bärtsch also began studying literature, philosophy and musicology at the University of Zurich in 1998. He studied musicology primarily because of the grants – which, he is anxious to point out, he has since paid back. However, his real interest lay with languages and the philosophy of aesthetics. At university, Bärtsch sought intellectual discussion as an artist: “Like language, music is a form of communication, and I wanted to learn more about it from the perspective of linguistics and philosophy.” The musician found what he was looking for in Adorno’s essays on music and language, but even more so in the work of the linguistic philosopher Ludwig Wittgenstein.

Bärtsch was fascinated by the analysis of words, phrases, and sentences, and their significance for communication. This has also enriched his music. “Language and music are structurally very close,” the composer observes. As in music, words and their meanings can be played with; the theoretical analysis of language facilitates the execution of his aesthetic ideas as musical notation. Not least, at university he also learned to think (more) logically and to argue precisely, which is an advantage in the group: “Thanks to my knowledge, I can better verbalize my musical ideas and share them with my band.”

Looking back, Bärtsch describes his three years studying at UZH as “immensely important and enriching.” However, after his interim exams, he had to decide how he wanted to continue to employ his time and energy. That meant saying goodbye to the university and focusing on music. “You can’t assert yourself in the musical world and write a doctorate at the same time,” he says laconically. And true to his motto of combining things, after his years at university he devised a course on “Practical Aesthetics” at the Musikhochschule Winterthur Zürich (Winterthur Academy of Music), as it was then known. Once again, as had already been the case at university, the idea was to combine practical musical experience with theoretical analysis.

In parallel, he worked on his own style and, together with fellow musicians, established the Zen funk quartet Ronin, which fuses elements of funk, jazz, classical and ritual music in a unique world of sound that appeals to the tastes of a wide range of music lovers. Thanks to this combo, of which he is bandleader, Bärtsch has become one of Switzerland’s most successful jazz musicians and was awarded the Art Prize of the City of Zurich in 2019. His latest album, Awase, was released by ECM in 2018; Bärtsch has recorded exclusively for the renowned label since 2005.

Ronin, Awase – these terms have their origins in the Japanese martial arts and refer to another of the musician and linguist’s passions: Japanese Zen Buddhism. This interest also dates back decades: Bärtsch started meditating just over 30 years ago, and in 2003/04 was able to immerse himself in the technique even further thanks to a sabbatical in Japan funded by the City of Zurich. While in Japan, he explored Koans – Japanese Zen texts that often appear to be contradictory and playful, similarly to Wittgenstein’s sentences. Nik Bärtsch has also been training in the martial art of Aikido for many years, and thanks to years of practice has achieved the third level (Dan).

The fact that he usually dresses in loosely cut black trousers and sweaters, combined with his bald head, increases his resemblance to a Zen master. However, he doesn’t see himself as such; his clothes are by the late fashion designer Christa de Carouge. In point of fact, his predilection for black gives center stage to his motto of focus. Just as the Buddhist color of happiness centers our gaze and distracts us from outward appearances, Nik Bärtsch wants to concentrate on the essential things in life: music, his family – and always to remain open to new ideas.

The portrait of Nik Bärtsch appeared in the UZH Journal 1/2021.