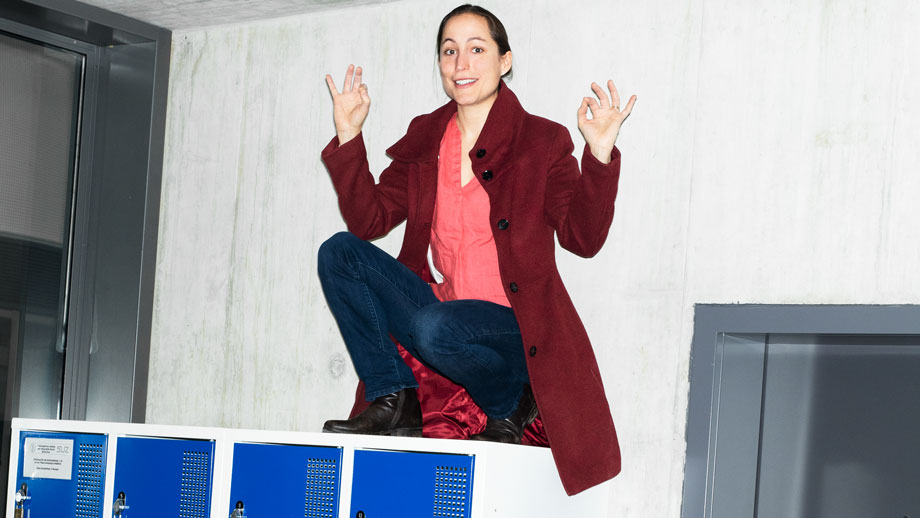 I‘m on a journey of discovery, says Tommaso Patriarchi. The 33-year-old neuroscientist wants to understand how the human brain works. To do so, he has developed a method that allows us to visualize the biological processes in our brains. Patriarchi’s biosensors help researchers all over the world better understand how our brains function. A research journey like this into uncharted scientific territory is difficult to plan, and involves pleasant discoveries, but also disappointment, nasty surprises and uncertainty. And this not only applies to research, but to academic careers as well.

The young Italian, who hails from the region around Florence, has already climbed some way up the academic career ladder. Patriarchi currently works and conducts research as an assistant professor at the University of Zurich’s Institute of Pharmacology and Toxicology. He was recently awarded one of the EU’s highly sought-after ERC Starting Grants, which are designed to support outstanding junior researchers. He can use this funding to set up and develop his own research group, to continue to forge ahead with his project and therefore to lay a solid foundation for a subsequent leap to a full professorship. Whether he makes it or not is still up in the air.

A career in academia involves a great deal of uncertainty, and often researchers spend many years not knowing whether they will ever achieve their goal of obtaining a permanent professorship at a higher education institution. What drives them to embark on this difficult path? What are their experiences, what obstacles do they need to overcome? And what are the ingredients of their previous success? We asked four young researchers who are at very different junctures in their careers. Some – like Tommaso Patriarchi – are well on their way to obtaining a professorship, while others are toying with the idea of turning a scientific innovation into a start-up and have yet to decide whether to pursue a career in academia or industry.

What they all have in common is passion and enthusiasm for scholarship and for their research field. For the most part, those who embark on an academic career are intrinsically motivated. It’s not big money that attracts them, but the opportunity to achieve some degree of self-fulfillment and to realize their own projects. “You need to be passionate about your own research, and you should firmly believe in your own ideas,” says art historian Raphaèle Preisinger, “I’ve always pursued things that fascinate me.”

So far, this strategy has paid off for her. In her current research, the externally funded assistant professor at UZH is looking at the significance of art in the negotiation of sanctity in the early modern period from a global historical perspective. She also obtained an ERC Starting Grant and a PRIMA grant from the Swiss National Science Foundation (SNSF), which supports high-potential women researchers on their journey to obtaining a professorship.

Science that makes a difference

Besides the prospect of driving their own research and realizing their own ideas, some young researchers are motivated by the idea of their work making a difference in society. “I’m motivated by the societal impact,” says Sarah Ebling. The computational linguist develops digital tools that translate spoken language into sign language and vice versa, or that simplify complex German texts. In this way, Ebling is helping deaf people and those with cognitive impairments better access the digital world. She works closely with the relevant groups of people in each case.

As a senior researcher at the Department of Computational Linguistics, Sarah Ebling heads up her own research group and is on her way to obtaining a professorship. “Luck is certainly also an element in a successful academic career,” she says. A crucial factor in her own career to date has been the fact that she applied for funding for her own projects early on and received support. Passion for research is an important driver behind an academic career, as is the freedom to be able to live out this passion as early as possible.

Early-career scholars can obtain this sort of freedom to carry out their own research through third-party funds from research funding organizations, such as the SNSF, the EU and other funded and assistant professorships. A large number of these professorships have recently been created at UZH, with the Digital Society Initiative alone launching nine such positions for young researchers in 2018, and 10 more set to follow. Research funding at UZH has also been reorganized with the aim of enabling doctoral students and postdocs to independently pursue their own academic ideas and to implement research projects (see box). To access these pots of money, you need to be proactive. “You have to be able to recognize, and invest in, opportunities,” says Sarah Ebling, “when it works out, you get a great deal of freedom to carry out your own research.”

But competition for these funds is fierce. To succeed, it’s thus not only important to be a good researcher with fresh and innovative ideas, but also to be a good communicator who can sell their project. “The stereotype of the introverted academic who nobody understands has not been true for some time,” says Stefan Dudli, “nowadays, ideas and projects need to be well presented, otherwise you won’t get any backing.” The biochemist is researching and developing a new therapy for back pain. He has so far secured CHF 1.6 million in funding for his research from various sources. Over time, you learn the art of application-writing, says the scientist, who envisages setting up a spinoff company and rolling out his new therapeutic method. To develop his business idea, he will be funded with a MedTech Entrepreneur Fellowship from the UZH Innovation Hub over the next 18 months.

Whether Stefan Dudli will keep one foot in academia or subsequently switch entirely to industry remains an open question, the answer to which also depends on his academic prospects. “As a young scientist, you always need to have a plan B, because an academic career can quickly be over if you can no longer get funding for your own research,” he says.

The academic-scientific system demands a great deal of flexibility from early-career researchers. For example, spending an extended period at a renowned research institution abroad is very much a natural part of an academic career. It is also clear that you shouldn’t necessarily seek a professorship in your home town or even home country, and that you need to be open to opportunities all over the world. And you have to be able to cope with the inevitable setbacks and keep dusting yourself off and getting back up again – for example when an application for funding is rejected, a paper is not accepted, or a job application doesn’t work out. “You have to develop a positive attitude to failure,” says Tommaso Patriarchi. “It’s part of the job of a scientist and is one step on the road to success.” You therefore need perseverance and a good dose of resilience to keep your career on track and not get demoralized.

Humanities scholars in particular often need the endurance of marathon runners, as achieving career success happens especially late in this area. One reason for this is that – unlike in the natural sciences, for example – here in Switzerland, a habilitation is still required to obtain a professorship in many subjects. In concrete terms, this means writing a lengthy book. This takes a long time and delays the subsequent career step. “In the United States, career decisions are made much earlier than here in Switzerland, which I think is a good thing,” says Raphaèle Preisinger, who herself lived and carried out research in the US for an extended period. For example, assistant professorships with a tenure track – which guarantees young researchers a full professorship if they perform well – are much more widespread even in humanities subjects in the US. Here, too, we should think about setting the course for careers at an earlier stage, the art historian says.

Their 30s are a crucial stage for junior researchers, and not only from a professional perspective. At this age, many are also asking themselves whether they want to start a family. Stefan Dudli, Sarah Ebling and Raphaèle Preisinger all opted to have a family. And in their experience, juggling children and a career is tricky. “It’s a constant balancing act,” says Dudli. And Raphaèle Preisinger has learned that you have to contend with prejudice if you continue on your chosen path in academia as a mother. “In Switzerland, this is a less obvious choice than elsewhere,” she says. Sarah Ebling talks about the crazy situation you find yourself in, especially when the children are small. However, it was precisely at this stage that the computational linguist received vital support. “When I became a mother, my supervisor at the department encouraged me to become a professor at a time when I had zero energy to think about those kinds of things – that ended up being incredibly valuable and helped me a lot,” she says. If she makes it as a professor, Sarah Ebling has set herself the goal of providing this same targeted motivation and support to team members. Whether she will achieve her goal of obtaining a full professorship remains to be seen. And for Tommaso Patriarchi, Raphaèle Preisinger and Stefan Dudli, too, much is still up in the air. In the meantime, they continue their research with passion, drive and enthusiasm.

The Graduate Campus (GRC) is a central and cross-faculty platform at the University of Zurich for junior researchers. It promotes the skills of doctoral students and postdocs, and supports interdisciplinary exchange and dialogue with the public. The GRC is committed to continuous and transparent quality assurance at the doctoral and postdoctoral level and ensures a supportive and empowering research environment. Through course programs and the awarding of grants, the GRC promotes the transferable skills and personal initiative of researchers and prepares them for a broad range of careers.

Through transdisciplinary projects and partnerships with renowned cultural institutions – such as Zurich’s Museum für Gestaltung – the GRC brings UZH research fields to the city and engages with local audiences. In doing so, it encourages and supports young researchers in taking part in public dialogue. Through its various activities, the GRC promotes the voices of young researchers as experts in their respective fields and underscores their important role in building an open and sustainable society. You can find a comprehensive overview of the GRC’s activities at: www.grc.uzh.ch