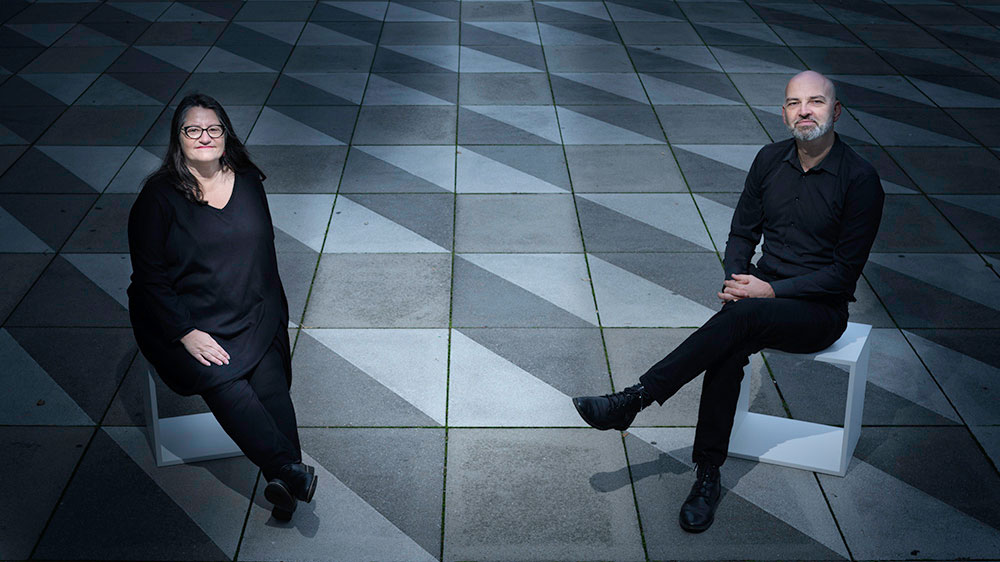 frizzoni und schäfer
Brigitte Frizzoni researches and teaches in the field of popular literatures and media with a focus on popular genres and TV series. Mike Schäfer is researching science-related conspiracy theories on the Internet as part of an SNF project. (Image: Stefan Walter)

Brigitte Frizzoni, Mike Schäfer, topics such as corona skepticism and QAnon are all over the media. Are we currently in the heyday of conspiracy theories?

Brigitte Frizzoni: Crises have always given rise to conspiracy theories. But today they’re more easily seen, because they spread much more quickly across all manner of channels. And yet, research suggests that conspiracy theories are no longer considered legitimate knowledge that is socially acceptable. This wasn’t always the case.

Isn’t it a matter of perspective? If you ask QAnon followers, they’ll consider their conspiracy theory to be credible.

Frizzoni: Absolutely. For QAnon followers, their theory is the truth. They believe they’re the ones who can see through the lies and reveal the truth. That’s also why the reject the term “conspiracy theory”.

Why do opposing world views thrive in times of crisis?

Frizzoni: Crises give rise to fear. We don’t how we should behave, or who will be affected. This makes us look for explanations so that we can get a grip on all the chaos in our world. Conspiracy theories come in handy here, since they give us a villain. For example, the Chinese lab that supposedly released the new coronavirus, or Bill Gates, who some people claim is planning to use vaccines to implant microchips in us all so that he can take over the world. And if there’s a villain that can be stopped, you regain your ability to control your own fate.

Schäfer: Conspiracy theories are also a strategy for us as individuals to make sense of things. And for some people in the current crisis, this is very important, particularly since there are so many things we don’t yet know for sure when it comes to coronavirus.

Schäfer: The two philosophers Silvio Funtowicz and Jerome Ravetz coined the term post-normal science. It refers to a situation in which there is a great need for information among citizens and decision-makers, but also a relatively high degree of scientific uncertainty. This is precisely the kind of situation we’re in right now. Even though we have many outstanding virologists and epidemiologists who know a lot about coronavirus, there are still elements we don’t understand. And we don’t have any compelling solutions yet either, even if the first vaccines are becoming available.

So conspiracy theories are filling a void in how we construe the world?

Schäfer: In crisis situations, where meaningful answers to key questions aren’t readily available, people start to look for alternative explanations – examples of such situations include 9/11, the financial crisis and the current pandemic, of course. Some people are then more willing to pay attention to those peddling conspiracy theories.

How do these explanations work?

Schäfer: Conspiracy theories have a specific structure: There is a phenomenon with an established explanation. Conspiracy theories replace the latter with an alternative that alleges that a group of people are secretly and maliciously conspiring to push their own agenda. The better the theory can play on these elements – for example, when elites are very detached from the rest of society – the more likely conspiracy theories can gain traction and followers.

Frizzoni: All conspiracy theories are a response to reality, but they offer a different interpretation of it. With migration, for example, there’s a conspiracy theory called the “great replacement”. According to this theory, there’s a secret plan that aims to replace the majority white population with Muslim and non-white immigrants. This resonates with people who feel disenfranchised, or who are afraid of losing their job, for example, We can see the same thing with coronavirus. Conspiracy theories are a response to the fears and anxieties of people who are convinced that the official explanations are false.

Supporters of the QAnon conspiracy theory in the US believe that there’s Satan-worshiping Democrat cabal of elite pedophiles who are running a global child sex-trafficking ring. It’s all very bizarre, and yet these ideas seem to be seeping into Republican circles and becoming acceptable. Perplexing, isn’t it?

Frizzoni: It’s an excellent example of how conspiratorial narratives are deliberately used to manipulate people and discredit political opponents. Such narratives are propagated because they’re useful to certain political circles.

Schäfer: The fact that political elites are spreading misinformation and conspiracy theories, as is currently the case in the US, isn’t typical of democratic societies. And yet, conspiracy theories remain a fringe phenomenon. From what we currently know, conspiracy theory supporters make up around 10 to 15 percent of the population. However, there have also been cases where a supposed conspiracy theory turned out to be true. For example, the break-in at the Watergate Hotel in 1972 was long suspected to have originated from Richard Nixon’s circles – but it was only proven years later. For a long time, US state surveillance of other countries through its intelligence agencies was no more than conjecture, and was only confirmed as a result of Edward Snowden’s whistleblowing. But these cases are the exception, of course.

Do conspiracy theories pose a threat to our society, despite their relatively low number of supporters?

Schäfer: Taking part in anti-lockdown protests or criticizing coronavirus measures in public doesn’t automatically make you a conspiracy theorist. This type of knee-jerk categorization isn’t very useful, as it makes it impossible to discuss criticism that may be warranted. But one thing is clear: When a conspiracy theory is immune to all rational reasoning and thus negates sensible measures, for example when it comes to containing coronavirus, then it becomes truly dangerous – because such a theory may end up getting people infected and costing lives.

Spreading conspiracy theories is also a business, for example in the US. How does this work?

Frizzoni: For example, the far-right US radio host and conspiracy theorist Alex Jones has his own YouTube channels, radio and TV stations – a whole media complex. In between his programs, he runs ads for products that relate to specific conspiracies, for example water filters that remove toxins from water. Jones is shrewd businessman and probably the most successful conspiracy theorist out there.

Kevin Roose, a blogger for the New York Times, wrote that there is no longer a “consensus reality” that different groups can all agree on, because the idea of a single, shared reality was an artifact of the 20th century, when people got their information from a handful of major media outlets. Do you agree?

Schäfer: In many countries, there are emerging sections of the public that are critical of social institutions or even turning away from them. In our research, we’re currently investigating something we’re calling science-related populism, which refers to claims that the world can’t be described through scientific methods.  According to these claims, science is abstract, removed from reality and artificial, and can be replaced by personal experience. Donald Trump, for example, tends to trust his “gut” on matters of science.  But of course, gut feelings aren’t all that useful when it comes to solving climate crises. Underneath this is the assumption that individual experience and feelings and personal instinct are just as suited to describing the world as scientific methods. And with this, you’re saying goodbye to science. These and other views that are critical of science seem to be more widespread today. But it’s not clear yet whether these sections of the population are indeed growing, or simply getting louder.

Is science losing its ultimate authority in the public discourse? Are people losing their faith in science?

Frizzoni: I’m not sure I’d say that. Especially at the beginning of the pandemic, scientists were practically stars, and virologists and epidemiologists were all over the media. They were taken down a notch or two once the danger seemed to have been averted after the lockdown. But hostility towards science has become more apparent, as has hostility towards the elites, because people now have more ways of voicing their opinions in public. At the same time, it’s clear that people appreciate and value science, as the coronavirus crisis has shown. My niece is an epidemiologist. She once told me: “One of the upsides of the crisis for me is that I no longer need to explain to people what epidemiology is.”

Schäfer: I don’t think there’s cause for concern here in Switzerland. The findings of our recent Science Barometer Switzerland survey are quite reassuring in terms of people’s views and faith in research and science. In other countries, we’ve observed that faith in science has even increased slightly during the pandemic, and that’s a good thing. The main bugbear is the US, where the debate on the standing of science is much more heated than in our part of the world.

Is there a connection between anti-scientific attitudes in the US and conspiracy theories?

Frizzoni: Conspiracy theories do indeed make for great fiction. They have all the ingredients of a good story. Just think of Dan Brown's conspiracy novels. I once heard a fan say, “If Dan Brown were a cult, I’d join.” In his books, he introduces readers to a world of conspiracy theories and secret cabals operating in the shadows to establish a new world order. Literature can thus certainly be a means of spreading conspiratorial ideologies, just as the Zeitgeist documentaries try to present conspiracy theories in an entertaining and involving way. But here I’d like to return to science again. It’s not as if there are no conspiracy theories floating around in the world of science. A fellow researcher of mine is investigating the “gender agenda”, a conspiracy theory that claims gender studies is unscientific and a threat to society, and that it is infiltrating higher education to push its hidden agenda – to make the world genderless and to eliminate the traditional heterosexual family. Some of these things are also being discussed by scientists.