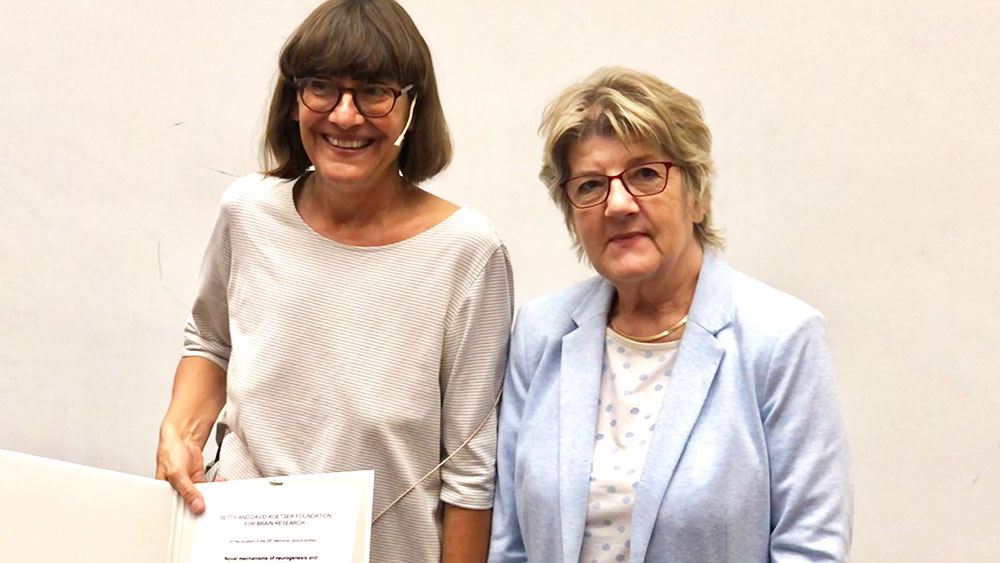 Understanding how the brain is built and how it achieves its enormous complexity, consisting of billions of neurons connected by trillions of synapses, may hold the key to enable brain repair in the context of numerous devastating brain diseases, such as stroke, Alzheimer’s or Parkinson’s disease. For her seminal discoveries in the context of brain development and repair, Prof. Magdalena Götz received the 2021 award of the Betty and David Koetser Foundation for Brain Research. The award was presented during the annual symposium of the Zurich Neuroscience Center (ZNZ) on 16 September.

Magdalena Götz showed that distinct glial cells, previously considered to be acting merely as support cells for neurons, function as neural stem cells during brain development and generate all neurons and also other glial cells that will populate the mammalian brain. Based on these breakthrough findings her laboratory studied the potential of glial cells to produce neuronal cells throughout life and identified fundamental principles underlying the life-long generation of neurons in the brain. Her group also identified key mechanisms how the neurogenic potential of glial cells can be harnessed upon brain injury to enable endogenous brain repair. Furthermore, her research provided important proof of principle experiments to show that neuronal cell type-specific transplantation approaches are capable to functionally improve lesioned neural circuits in animal models of human disease, demonstrating potential directions for future therapeutic interventions to treat acute and chronic neurodegenerative disease.

Magdalena Götz was born 1962 and grew up in Heidelberg. She studied Biology in Tübingen and Zürich. After her PhD in Tübingen and a postdoc in London she became Max Planck group leader in Munich in 1997. Since 2004 she is Director of the Institute of Stem Cell Research at the Helmholtz Center Munich and since 2005 Chair of Physiological Genomics of the Ludwig Maximilians University, Munich.

The Betty and David Koetser foundation supports basic and clinical neuroscience research in Zurich since 1993 and awards outstanding neuroscientists with an annual award.