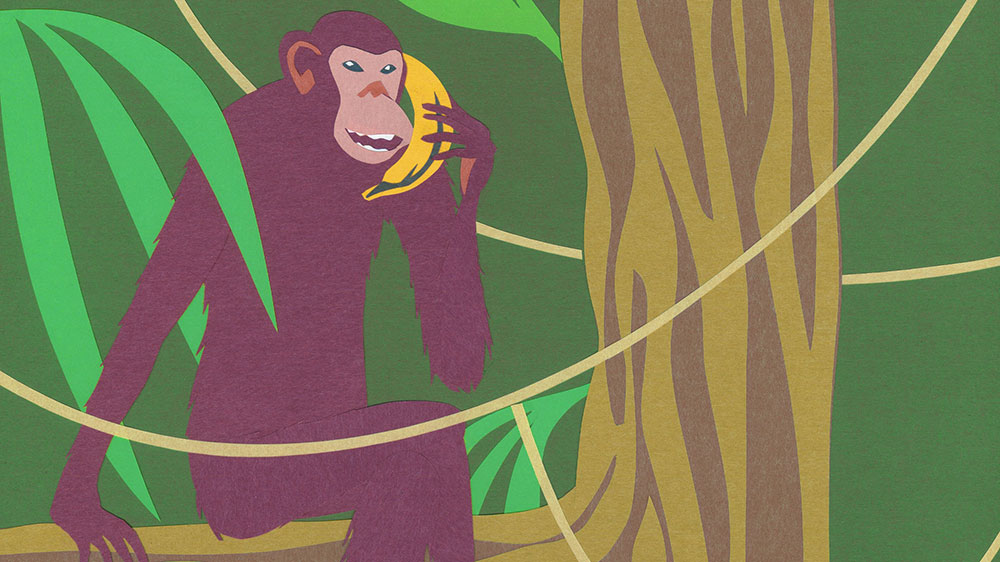 great ape
Do great apes perceive events in a kind of structured way as we do? (Illustration: Anne Sommer)

Who doesn’t love a good action film? As it happens, apes do, too. Both humans and apes enjoy watching scenes where something exciting happens – for example, when others fight or argue with one another. In Basel Zoo, chimpanzees, gorillas and orangutans get to watch such scenes from their everyday life play out – on video. To encourage the animals to watch, an appliance with a kind of pacifier that releases a much-loved sugar-free syrup has been installed in front of the screen. And so the apes sip sweet syrup as they watch a series of sequences that are played to them on video. What they don’t know, however, is that every tiny movement of their eyes is being tracked.

This unusual experiment is part of a joint project by researchers from the Universities of Neuchâtel and Zurich to shed light on the origins of grammar. “Our hypothesis is that the origin of grammar lies in the ability to perceive events in the world in a structured way,” says Klaus Zuberbühler, biologist, cognitive scientist and professor at the University of Neuchâtel, who leads the research in Basel Zoo. Humans do this in a very particular way. We understand events – for example, “eat a sandwich” or “pick up a bottle” – as somebody – the agent, to use the researchers’ term – doing something that has a specific effect on something else – the target, or grammatical patient. In eyetracking experiments, this manifests as follows: When observing a scene, we first look at the agent, then at the patient, and then back and forth between the two – all within a matter of milliseconds.

This pattern of perception is reflected in our language. For example, in English we say “The woman is eating a sandwich” or “The child has picked up the bottle”. This basic agent/patient principle can be found in all languages across the world. “All languages construct events in a very similar way, even though they may put more or less emphasis on the agent,” says UZH linguist Balthasar Bickel, who is involved in the research. “The asymmetry of agent and patient plays an instrumental role right down to the level of grammar.”

This is why the researchers believe the principle could be the starting point for the evolution of grammar. It could be the foundation upon which the sentences of all the languages in the world are built. “We suspect that all of this is already anchored in our pre-linguistic perception,” Bickel says. “We experience the world within the categories of agent and patient.” Experiments have found that children who were shown two dots moving at random interpreted the dots’ movements as one chasing after the other. “Our brains tend to perceive the world as causal, as if they were hardwired to detect causality,” says Klaus Zuberbühler.

With their research at Basel Zoo, the scientists now want to find out whether this is also the case in our closest animal relatives. Do great apes perceive events in a kind of structured way as we do, or does their perception differ from ours? If the former is the case, the patterns of behavior of humans and apes analyzed through eyetracking should match up. To answer this question, the researchers thus decided to treat the chimpanzees, gorillas and orangutans in Basel Zoo to some home cinema.

The researchers showed the same video sequences to students at UZH, also tracking and analyzing their eye movements as they watched.  The data from the zoo are now being compared with those of the students – results are still pending. “Should the patterns of perception match up, however, we could conclude that the brains of apes are in principle capable of grammar,” says Klaus Zuberbühler. The next step would then be to find out why this potential has remained untapped.

This article is published in the current UZH Magazin issue