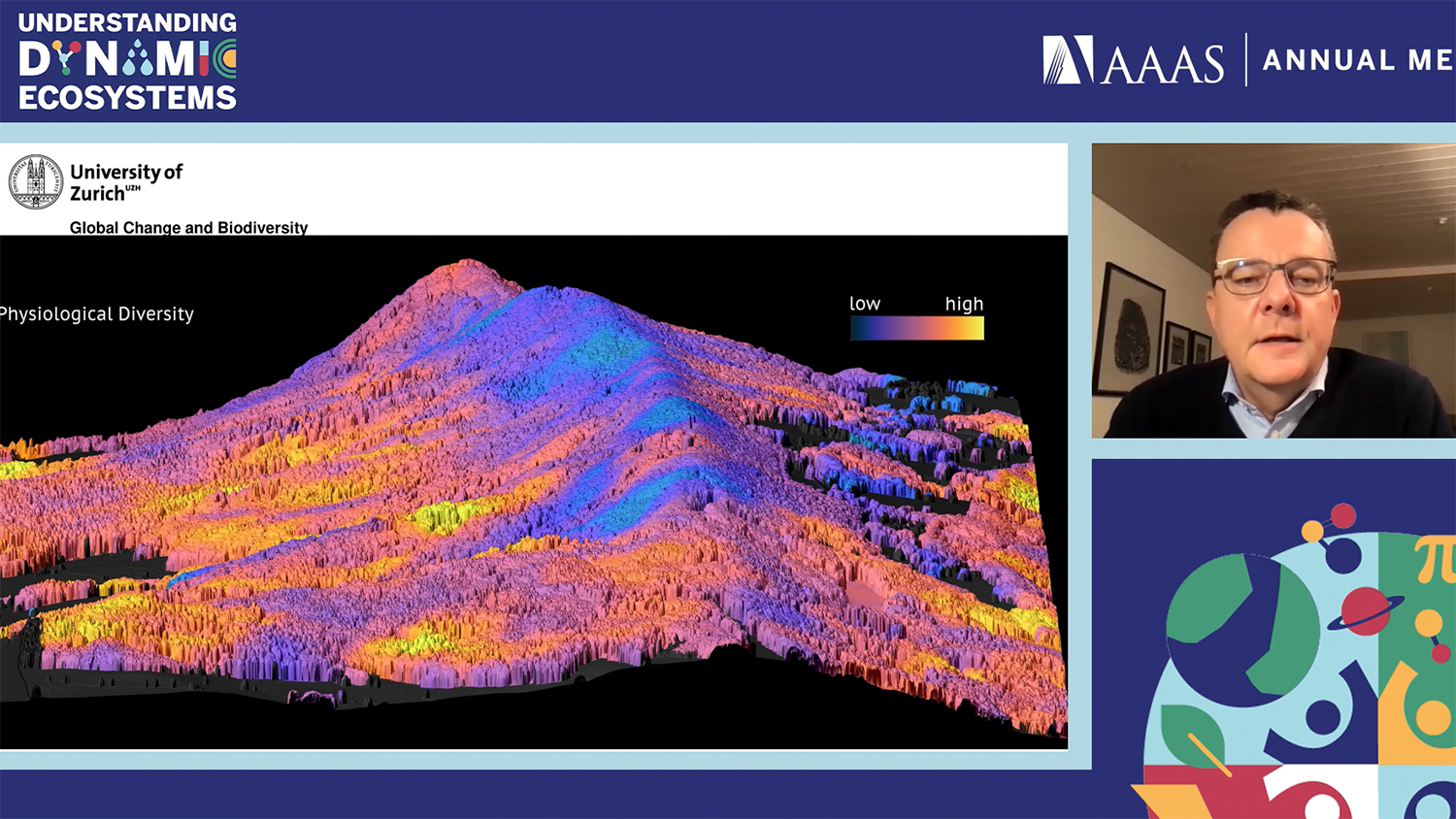 The online stage is set for the annual meeting of the American Association for the Advancement of Science (AAAS), one of the most important global events on the scientific calendar. Normally, researchers from all over the world would travel to the US to talk science and discuss the latest research findings, technologies and facilities.

As a result of the pandemic, however, the 2021 annual meeting of the AAAS, which has more than 120,000 individual members, will convene entirely online. And for the first time, UZH is participating with a high-ranking representative – none other than President Michael Schaepman, who has been invited to speak on the opening day on 8 February.

The theme for this year’s meeting is Understanding Dynamic Ecosystems. The conference will explore the complexities and dynamics of various ecosystems by drawing on a multitude of perspectives. As professor of remote sensing, Michael Schaepman can share his expertise on the use of satellites for monitoring biodiversity. Together with two other researchers, he will participate in a scientific session on the use of technology to improve our understanding of changes to biodiversity.

Three videos were recorded in advance for the session, and registered users have been able to view the presentations on the conference website since a few days ago. In his video, Michael Schaepman focuses on biodiversity variables that can be monitored from space. For example, it is possible to identify tree species based on morphological features, or use spectroscopy to distinguish plant species and even genotypes from afar.  Land cover classification, nowadays almost common practice, enables researchers to comprehensively measure how biological life cycles are changing around the world (phenology).

Michael Schaepman’s video makes it clear that remote sensing will play a key role when it comes to monitoring and understanding biodiversity. This view is shared by his fellow researchers Jeanine Cavender Bares of the University of Minnesota, who talks about the importance of spectral biology, and David Schimel, a senior research scientist at the NASA Jet Propulsion Lab in Pasadena. All three scientists will also take part in a live session on 8 February 2020 at 8:00pm CET.

Being invited to speak on the topic of (monitoring) biodiversity at such a prestigious conference is a great honor – and one that is in no small part linked to the University Research Priority Program “Global Change and Biodiversity” as well as the bioDISCOVERY program, whose international project office is hosted by UZH. This research network works closely together with the Intergovernmental Science Policy Platform on Biodiversity and Ecosystem Services (IPBES),  which has a similar role to that of the UN climate panel IPCC and promotes the implementation of the Biodiversity Convention. The participation in the AAAS Annual Meeting was initiated and made possible by swissnex Boston, an important network of Swiss researchers abroad of the State Secretariat for Education, Research and Innovation.

According to IPBES, around one quarter of biological species are threatened with extinction. However, reliable data on species loss is only available locally. As the conference contributions make clear, remote sensing opens up the prospect of increasing our expertise and improving our understanding of ecosystems and their functions – as well as our ability to protect them.