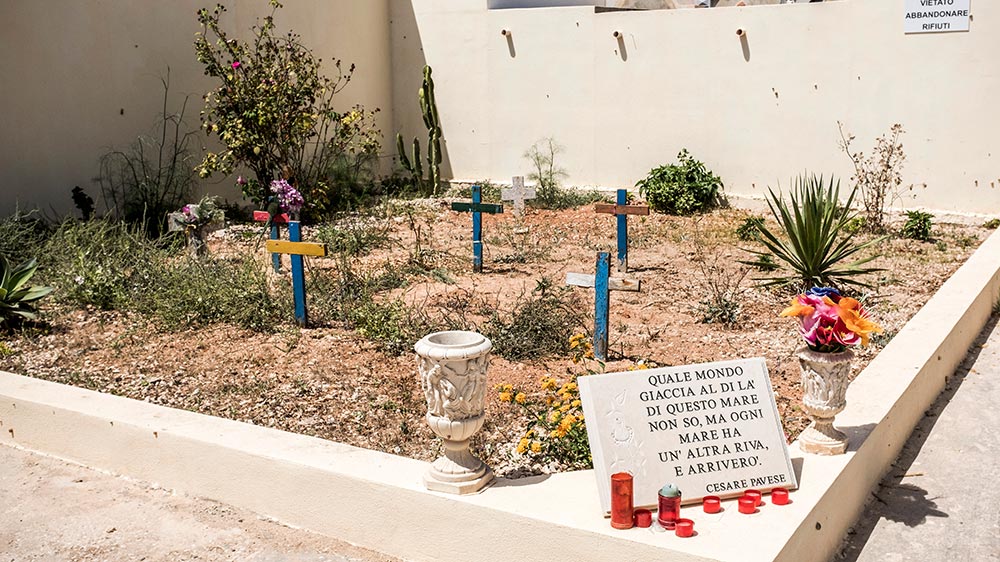 At the beginning of October Daniela Stauffacher was flying once again to Lampedusa to attend a memorial ceremony. It was the anniversary of one of the many boat disasters in which African refugees had lost their lives. Memorial ceremonies are big business for Lampedusa: When else would two thousand – sometimes famous – guests make their way to the tiny island in the middle of the sea? After all, Lampedusa certainly doesn't get rich from the "solidarity tourists" who come to look at the nameless graves and the carcasses of refugee boats stranded on the island. And then, while sitting on the plane back to Zurich, Daniela Stauffacher reads the news: Refugee boat sinks off the coast of Lampedusa, 13 women drowned, 20 persons still missing. The very next day, she was on a plane again. "Lampedusa has become a venue for politicians and do-gooders," she says. "I wanted to see who comes when the island suddenly becomes a stage again for everyday life and death."

Again, the 32-year old religious studies scholar did what she had always done throughout the course of her research project: She spoke to people, to the living. With a fisherman who confessed his fear of casting out his nets and pulling refugee corpses on board. With a pregnant woman from Tunisia who had survived the accident but had lost family and friends and was sitting alone in the port. With the mayor who was once again confronted by allegations of corruption over the burial preparations. And she spoke with an eyewitness and learned how the tragedy happened: When the Italian patrol boat carried out its intervention maneuver, the refugees had panicked. They had all crowded onto one side of the ramshackle boat into which their Tunisian traffickers had crammed them, causing it to capsize. "It's a classic," says Daniela Stauffacher. She has heard the same story many times.

"Managing Border Deaths in Southern Italy: Negotiations and Ritual Practices" – this is the name of Stauffacher's doctoral thesis. After submitting it to the Swiss National Science Foundation, she was granted funding in 2017 for four years. There are two things that Stauffacher wants to find out during this time: How do the Italian authorities deal with the nameless dead, and what burial rituals are they given? "I'm also interested in whether and how the graves of the drowned refugees are documented," the doctoral candidate explains. In other words, whether and how the deceased can be found by their relatives in distant Africa.  "This is important for the bereaved – not only emotionally, but also pragmatically. If the husband is deemed missing, for example, the wife cannot receive a widow's pension in her home country."

Italy doesn't yet have a central database that records deaths in the Mediterranean. The bodies are usually put in coffins on Lampedusa and transferred to Sicily; the personal effects of the deceased end up with the police. "I visited the Syracusa police station to build my own impression," says Daniela Stauffacher. "Files are piled high, reaching up to the ceiling. Soaked passports, corroded cell phones, shriveled notebooks: All evidence of the identity of the dead." They are left lying around and nothing happens. Most of the dead remain nameless.

As a result, their graves also remain nameless. The mortal remains of the drowned finish up in the region's cemeteries. Sometimes, according to Stauffacher, a priest is called in to bless the dead. The blessing is very brief, then the coffins disappear into the earth. Do our funeral rituals make sense if we don't know the people we are burying? When we don't even know if they had our faith or another? "The people involved turn to their own religious traditions to respect the dead," Stauffacher believes. "They do their duty to God. It is about them, the living, not about the deceased – as is always the case at funerals. For the unidentified dead, the ritual is simply reduced to a minimum."

Except in the case of the cemetery worker of a small Sicilian community, a stocky, burly character, who guided Daniela Stauffacher to a number of refugee graves. Unable to bear the fact that the graves were only marked with a number coldly carved into the cement of the cemetery wall, he had taken the trouble to mark each grave with a small cross. It would otherwise be disrespectful, whether Muslim or Christian, he explained to the petite researcher from Switzerland. "The religious symbolism was his own personal homage," Stauffacher says.

Conducting field research in southern Italy is no picnic in the park – this had been clear to Stauffacher from the start. However, she hadn't expected the region's pervasive machismo mentality to hamper her work. On location, the young Swiss woman found herself interacting almost exclusively with men and was dependent on their favor to obtain information. "On my first trips I was pregnant. Then there were no problems; you are sacred in Italy." Later she took her newborn daughter with her. Although this helped against the men's obtrusive attention, it was only to a limited extent. Once she was stalked so persistently by a man that she had to abandon her research and leave the village.

What drives a woman from affluent Zurich to dedicate her efforts to the fate of the world's poorest despite all the difficulties? "Certainly not pity – and not a guilty conscience either," says Daniela Stauffacher, briskly and clearly. "But I am restless, driven, always in motion. That is probably what I share with the migrants." And like the migrants, Stauffacher also pushes boundaries, to see how far she can go. She had already done so as a child. At the age of six she ran out onto a frozen pond, although she knew full well that it was forbidden and dangerous. The ice broke and she almost drowned.

Daniela Stauffacher studied religion, philosophy and Russian literature in Zurich, Paris and Berlin. For her Master's thesis she spent several weeks in the Calais Jungle, the huge self-governing refugee camp where migrants waited for a crossing to Great Britain. The work resulted in a book entitled "In this place we are very far away from God". For Stauffacher it was a boundary-exploring experience – in both senses. "The camp is located both on the boundary to the Schengen area and on the boundary of what is tolerable. I wanted to find out how people organize themselves in order to make something tolerable out of the intolerable."

Fishermen throw corpses back into the sea

Today Daniela Stauffacher explores the boundary between Africa and Europe, for migrants a boundary between life and death. Almost 19,000 boat refugees have drowned in the Mediterranean in the last five years. Very few of them are ever washed up, and the fishermen on the trawlers throw the bodies back into the sea when they get caught in the nets. They are afraid of the complications.

Stauffacher is halfway through her work but intends to go to Sicily one more time to finish off her research. Then she should have completed her data collection – a "wild dataset", as she calls it, of images, videos, interviews, notes, even objects that she has been given. With the help of the University, the religious studies scholar has created a wiki to integrate the data into a network, with links and hyperlinks for sources and cross-references. This is the only way she can reap the rewards of her two-year fieldwork.

Daniela Stauffacher will divide her thesis into two parts: An ethnographic description of her work on the ground and an analysis of her data. And then she is thinking of re-working the doctoral thesis into a popular science book so that her message can reach a broader public: "Mobility is a human right. We drive to work, visit relatives, travel, move house – and all this on safe routes with safe forms of transport. The fact that it is denied to certain people is reprehensible and concerns me deeply," the religious studies scholar says.

From refugee boat to work of art

In 2015, a refugee boat sank off the coast of Sicily causing more than 900 people to lose their lives. As part of her work, religious studies scholar Daniela Stauffacher decided to research this story too and came across a special case concerning the treatment of the nameless dead: Italy's Prime Minister at the time, Matteo Renzi, had arranged for the "Barcone" to be recovered – at a cost of a good ten million euros and surrounded by plenty of media attention – and the bodies of the drowned examined by forensic scientists.

On two occasions, Daniela Stauffacher wanted to visit the "Barcone" during her trips but did not find it: It was lying well-hidden in a Nato base near Augusta. In an article published in the "NZZ am Sonntag" on 21 July 2019, Stauffacher then reported with some cynicism – for without cynicism it's difficult to deal with topics of this nature – on the wrangling that had later broken out over the ship's severely damaged hull.

The "Barcone" shipwreck was one of the most serious accidents involving migrants worldwide. But this is not the only reason why it is a special case. "The dead have to be dealt with quickly," says Stauffacher. "Once on land, they are a risk for the government." In her opinion, the Renzi government had underestimated the scale of the undertaking with their political grandstanding in southern Sicily. After all, the multiple victims of the "Barcone" also had to be removed as quickly as possible to the various cemeteries located in the region. There was no-one keeping an overview, and no-one knows where they are today.

Another reason why Daniela Stauffacher sees the story of the "Barcone" as a special case is because of its huge economic impact. The recovery, autopsies, burials and media activity all generated enormous revenue. "Entire industries were involved," says Stauffacher. Even the arts industry joined in the game: Swiss artist Christoph Büchel showed the punctured "Barcone" at the Venice Biennale and elevated it to the status of a work of art.