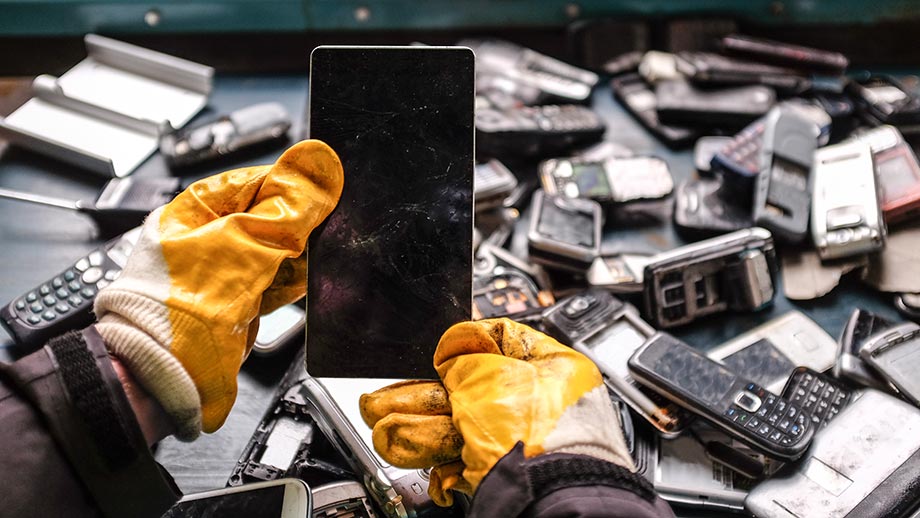 mobile phone
Throw it away or keep it? Digital devices are used for shorter and shorter periods. (Image: Istock/baranozdemir)

An army of recycling robots sorts through our cities' rubbish, takes apart appliances, and recognizes and separates different materials so that they can be reused. The electronic garbage sorters get better and better at reclaiming pure base materials by learning independently through artificial intelligence. The information they gain is important, because it in turn helps engineers learn how to build appliances that can be more easily recycled. The recycling squads are fed with excess electricity from wind power plants and solar panels. That means that whenever there is particularly heavy wind or a lot of sunshine, the recycling robots wake up and get to work.

It sounds like a plausible scenario, but unfortunately it’s science fiction – for now. For Lorenz Hilty, the situation today is clear: “If our lifestyles are to become more sustainable, we need to find an intelligent way to close product life cycles.” That will also require imaginative thinking about how we can shape sustainable future lifestyles. Hilty is working on just that: The professor of informatics and sustainability research at UZH is occupied with the question of how digitalization can help create a sustainable society. He is convinced that this is a key part of a more sustainable future. “Digitalization offers the chance to save enormous amounts of energy and therefore to reduce the burden on the environment. And it could help us to coordinate and orchestrate an intelligent, overall environmentally friendly product life cycle,” says the researcher. Hilty believes we are barely using this potential today.

Our use of digital devices, for example, is currently miles off a climate-neutral product cycle. Computers, smartphones and other intelligent devices have their own ecological footprint. Manufacturing them, in particular, requires huge amounts of energy, and they end up being thrown away at ever shorter intervals. “We live in a throw-away society,” says Lorenz Hilty, “and digital devices are also being used for shorter and shorter periods of time.”

On the hamster wheel of consumerism

This throw-away mentality is fueled by the producers, who continually develop new software in order to make the old devices seem out of date much quicker than is actually necessary. At some point, the devices become incompatible with the new programs and standards, and then they land on the scrap heap. “As consumers, we are on a hamster wheel,” says Lorenz Hilty. “We are effectively forced to take part in the trend.”

Hardware is thus regularly decommissioned and scrapped, even though from a purely technical point of view it still works perfectly well. The trend for shorter lifespans is affecting more and more devices that contain IT components. “That doesn’t need to be the case,” says Hilty. This throw-away mentality is also ecologically problematic because less than one third of the materials inside IT devices can be recycled and reused.

As a possible way out of this dilemma, Lorenz Hilty believes a “right to repair” regulation could work – the EU is currently in the process of introducing such a ruling for electronic appliances which Switzerland would probably also implement. The “right to repair” means appliances would have to be repairable with commonly available tools. In the USA, there is already such a “right to repair” for cars. It stipulates that a car has to be constructed in a way that it can be repaired not only by an authorized dealer, but by any car mechanic or skilled owner. “A similar right could be introduced for IT products,” says Hilty. The devices would have to be made in such a way that a battery or a smartphone camera could be changed relatively easily. Today that is often almost impossible, because the parts are so firmly integrated. If the devices were built in a more modular fashion, repair shops would be better placed to fix them. “That way you could quite happily go on using supposedly ‘old’ hardware for a long time.” Consumers would have greater autonomy: Each of us could decide for ourselves what functions we want our devices to have, and we would be less dependent on the producers.