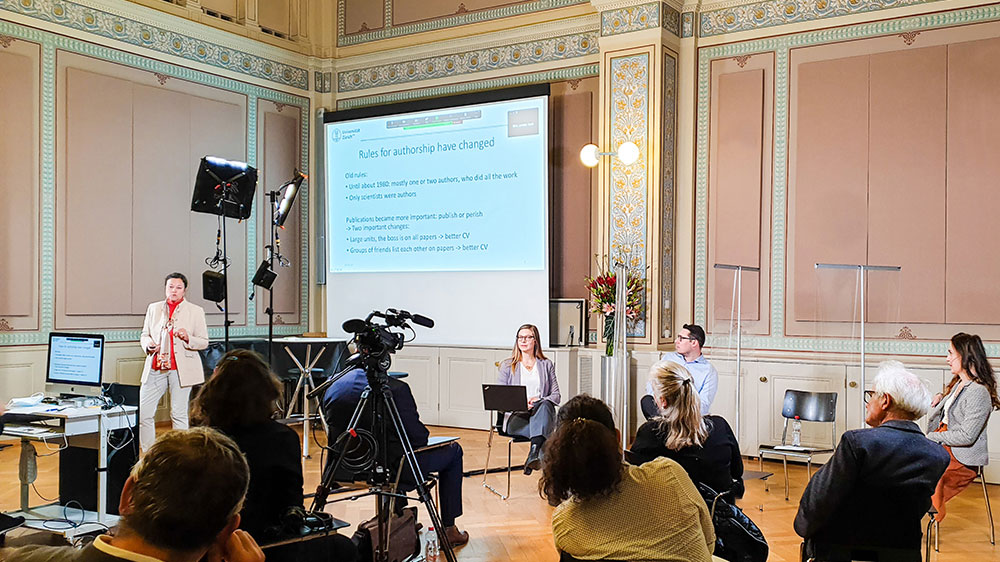 graduate campus annual ceremony
The annual event of the Graduate Campus: On the panel were (left to right) person of trust in the Faculty of Science Monica Zwicky, chair Vera Eichenauer, academic associate at the UZH Institute of Sociology Justus Rathman and psychoanalyst Alba Polo. (Image: Carlotta Superti-Furga)

“Academic authorship – how does the mantra ‘Publish or Perish’ shape our understanding of authorship?”: This was the title of the panel discussion held by the Graduate Campus on 29 September as part of their annual event. The speakers were Justus Rathmann, an academic associate and PhD candidate at the UZH Institute of Sociology who conducts research into conflicts of authorship, Professor Monika Zwicky, who as person of trust in the Faculty of Science is frequently approached regarding questions and conflicts of authorship, and psychoanalyst Alba Polo, who alongside her scholarly work has also recently published a fictional work in the form of micro-stories. The discussion was chaired by Vera Eichenauer, postdoc at the KOF Swiss Economic Institute at ETH Zurich.

Alba Polo told the panel that for her, writing was a very individual process that revealed a lot about one’s personality and way of thinking. The act of writing therefore put you in an inherently vulnerable position, said Polo. For young researchers, publishing was like a kind of coming out. Justus Rathmann stressed the importance of publishing for success in academia. It was particularly important for young researchers who needed to build their reputation, he said. But many of them might not even know what exactly qualifies someone for recognition as an author. Also, junior and senior researchers might have different norms regarding authorship. The existing guidelines should be promoted more to make everybody more aware of them, said the sociologist.

Be realistic and get second opinions

To this end, Monica Zwicky gave a short lecture at the start of the panel discussion on the Guidelines for Authorship. She encouraged the young academics to read the guidelines and ask for their rights. However, she also said researchers should be realistic when assessing their own contribution to research and publication, and should seek other opinions. It was not always easy to say whose contribution was the most important or creative. As a rule, said Zwicky – speaking from experience – solutions could be found. If people did get into conflicts, they should seek help and advice early on, Zwicky reminded the listeners. Ideally, the team should discuss the different roles and possible consequences for authorship at the planning stage of a paper.

“This is important because collaborators in research are at the same time competitors for future positions and funding,” said Justus Rathmann. He also thought that PhD candidates or postdocs would generally hesitate to jeopardize relationships with supervisors and superiors in case of a conflict of authorship, as such relationships were helpful for career progression. Alba Polo pointed out that in many cases supervision, assessment and management roles were all performed by the same person. This threefold dependency should be addressed in academia before simply telling junior researchers to stand up and ask for their rights. The doctoral committees introduced in many faculties provided a good tool to reduce such dependencies and also to address other conflicts, said Monica Zwicky.

The panel’s initial exchange was followed by questions and participation from the audience, both those who were on-site and watching online, covering issues of authorship, conflicts, and the influence of academic structures on research, writing and publishing. The mixed bag of panel participants and audience led to an interesting and insightful discussion in which the divergent assessments and perspectives of the various disciplines became apparent.