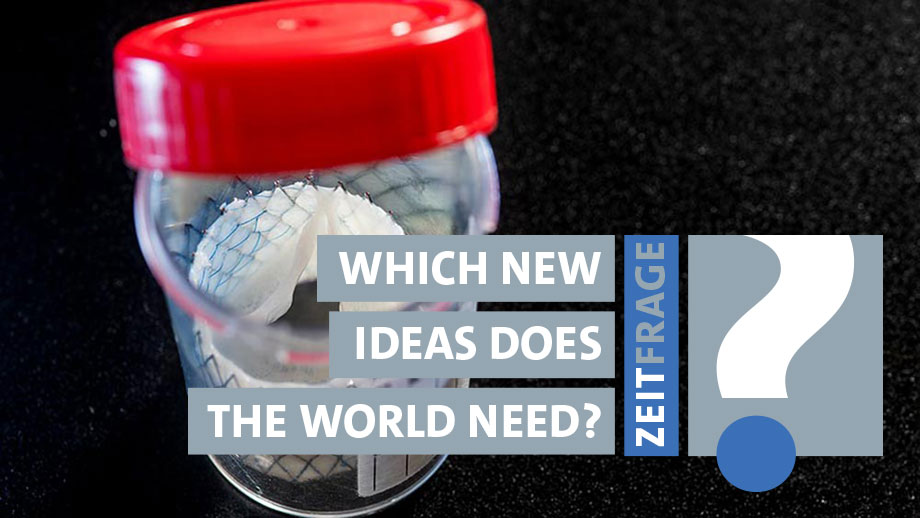 Herzklappe
A next-generation heart valve that acts as a scaffold for the body’s own cells. (Image: Ursula Meisser)

Maximilian Emmert is excited.  Cardiology is currently undergoing radical change, and he is playing an active part in shaping it. While the latest developments in the field may sound like the stuff of science fiction – from cardiac surgery without cutting open the chest to human cells that transform an artificial prosthesis into a native-like heart valve – the former is already a reality and the latter could soon be, too. Professor Emmert is currently working on this at the University of Zurich’s Institute for Regenerative Medicine.

But let’s take one thing at a time. In August of this year, the U.S. Food and Drugs Administration (FDA) made the seemingly unremarkable announcement that it had extended approval of transcatheter aortic valve implantations (TAVI) to low-risk patients. This formal announcement marked a paradigm shift in cardiology. For over 50 years, artificial heart valves were mainly replaced through complex surgery. With TAVI procedures, however, interventions have now become minimally invasive. Currently, some 300,000 implantations are performed worldwide every year, and due to rising life expectancy, this figure could triple by 2050. The latest development suggests that in future, heart valves will no longer be replaced, but displaced (see box).

This news comes as no surprise to Emmert, as the cardiac surgeon and researcher is a great believer in the TAVI procedure. The European Research Council recently awarded him a grant of 1.5 million euros to develop his method at the research hub in Zurich. While this minimally invasive procedure is new, the implanted heart valve prostheses have been the same since the very first operations. They are either mechanical (made of metal) or biological (made of tissue from pigs or cows).

Such prostheses have many limitations – the most significant of which is their limited lifetime. The younger the patient, the higher the likelihood that they will need another operation. “Nearly half of 50-year-old patients will be back to see us again,” says Emmert, who is also a professor at the Charité - Universtätsmedizin Berlin and the German Heart Center in Berlin, alongside his position at UZH. All these repeated interventions bring risks of infection, and the foreign components in the body also increase the risk of thromboses and strokes.

Emmert and his team have five years and 1.5 million euros to find a solution to these problems. Or, to put it another way, to prove that their solution works. Because they already have one. The project is called TAVI4life. It aims to produce a heart valve that lasts a lifetime – and which is implanted using a state-of-the-art, gold standard surgical procedure. To achieve this, Emmert has an idea that is as simple as it is ingenious: He wants to get the body to build the heart valve itself using an artificial prosthesis, which is subsequently broken down by the human cells and replaced by the body’s own tissue. “Our job is to orchestrate this process,” says Emmert.

Prostheses that grow with the patient

Human cells play the leading role in manufacturing the artificial heart valve in the first place in a process called tissue engineering. The cells are cultured on a polymer heart valve, on which they start to produce connective tissue in a bioreactor. This results in what is known as an extracellular matrix – a sort of scaffold onto which other cells can subsequently bind inside the body. “These niches and pores offer the perfect conditions for human cells,” explains Emmert. In a final step before implantation, the idea is to remove the cells, as otherwise the recipient's immune system could reject the foreign cells. This leaves a heart valve consisting of a polymer scaffold and the matrix built by the cells.

Producing the new heart valve is therefore quite complex. As if that were not enough, the polymer scaffold and the stent used for implantation by catheter have to disappear to ensure the artificial heart valve can successfully transform into a native-like valve. The good news is that our bodies’ own cells are able to break down both bioresorbable stents and the polymer. The bad news, however, is that getting them to do so at the right speed is a major challenge. “The body has to grow tissue simultaneously to ensure the valve constantly remains functional,” explains Emmert.

Emmert and his team, which is made up of biologists, doctors, bioengineers and materials scientists, have been working on this difficult task for several years. And they recently achieved a breakthrough. In a study, published in the journal Science, researchers successfully implanted heart valves in sheep which they had produced using precisely this new approach. They cultivated sheep cells on the prosthesis, let them build a matrix and then removed them.

Almost a year after implantation, there was virtually nothing left of the polymer heart valve. The cells had done their job and built a replacement. The perfect timing was achieved with the aid of computer models, which among other things calculated the ideal geometry of the heart valves. In another forthcoming study involving artificial blood vessels, the Zurich-based researchers also show that the prosthesis subsequently grows with the host organism.  This is crucial in terms of the method being used in very young patients - e.g. children with severe heart defects.

So the principle behind TAVI4life works. And if it works in sheep, it should also work in humans. But to prove such a hypothesis in medicine, several regulatory obstacles first have to be overcome. This is not entirely straightforward for Emmert’s venture, in which the human body ultimately has to produce the definitive evidence that the method works. “It’s important that we now proceed with caution,” says Emmert. They plan to apply the new technique for the first time in 2020 in children with specific severe heart defects, in whom the potential benefits of the procedure are high and the risks comparatively low. “Children have great potential for regeneration,” explains Emmert.

In the best case scenario, a fully regenerative aortic valve could be used for the first time five years from now. But it could take twice as long. When you think that it took half a century to find a less invasive alternative to open-heart surgery to replace heart valves, that’s not long. Clearly, cardiology is currently making rapid progress. And researchers in Zurich are right at the forefront. It’s no wonder that Maximilian Emmert is excited when you hear what he has to say.

Displacing damaged heart valves rather than replacing them

Our four heart valves ensure that blood flows away from the heart, but cannot flow back in the other direction. If someone's valves no longer open or close properly, we say they have valvular heart disease. Such defects occur almost exclusively in patients over 50 and are often fatal if left untreated. The most common and most serious problems are caused by the aortic valve.

Since the 1960s, valvular heart disease has exclusively been treated through open-heart surgery, where the patient’s chest is cut open and they are connected to a heart-lung (bypass) machine so that the heart valve can be replaced during an operation that takes several hours. The first alternative emerged in the early 21st century: Transcatheter aortic valve implantation, or TAVI. TAVI involves an artificial heart valve being compressed in a stent and inserted into the body using a catheter. The prosthesis merely pushes the damaged heart valve aside, rather than replacing it. The new procedure only requires a very small incision, takes just under half an hour, and can be performed under local anesthetic.

What was originally designed for older, very sick patients who  may not have survived a major operation is gradually evolving to become the gold standard in the treatment of valvular heart disease. A few years back, TAVI was approved for medium-risk patients. The procedure has now been opened up to all patients in the United States, and Switzerland is likely to follow suit soon.