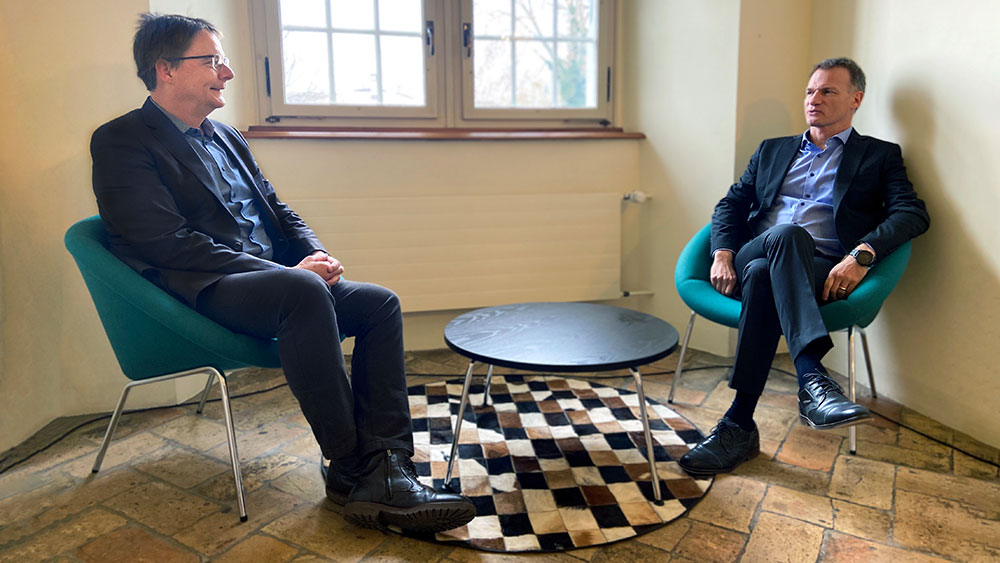 Michael Schaepman, in a new development, Chief Information Officer Thomas Sutter will be joining the Executive Board of the University as a permanent guest in an advisory capacity. To what extent is UZH now placing more emphasis on digitalization?

Michael Schaepman: Cyber risks were one major reason for including UZH’s head of IT as a permanent guest on the Executive Board of the University. We are performing more and more experiments and other work processes in research, teaching and administration on computers. The utilization of new machines and application software has also given rise to new risks that we have to keep a close eye on.

Michael Schaepman: Universities are hatcheries of good ideas and are considered friendly entities. One doesn’t expect them to be the source of attacks on third parties, which is precisely why they are vulnerable to being used as hosts to launch cyberattacks. This poses a risk to our (data) security, but also to our reputation.

Has UZH already been a target of cyberattacks?

Thomas Sutter: There are regularly recurring incidents at UZH, like at other universities, but we have been spared thus far from successful large-scale cyberattacks. There have been, for example, many phishing attacks – phony e-mails that are sent in an attempt to obtain access to the recipient’s personal data. Universities are very open organizations; the actions of staff and students contribute to making them that way. At the same time, universities possess valuable data that render them attractive targets for potential cyberassailants.

What can be done to thwart cyberattacks?

Thomas Sutter: To date we have been able to protect ourselves effectively through the use of technical tools such as firewalls. But it’s also important to make UZH staff and students more aware of cyber risks because the most frequent successful attacks stem from carelessness and routine behavior: You receive an e-mail and reflexively click on the attachment. The e-mail purports to be from a sender you know, is addressed to you personally and looks deceptively authentic.

Can you give UZH students and staff any tips on what to look out for?

Thomas Sutter: Basically, you should critically inspect the sender address, the subject line and the contents of an e-mail, including any links or attachments contained therein, for anything unusual. We have drawn up a fact sheet and checklist on how to do this. Many risks can be reduced considerably simply by doing a five-second security check.

Michael Schaepman: Data ownership is also an important issue here. We work in an environment that involves competition, but also trust. That’s why we must always ask ourselves if the data we are sent may be forwarded or is not intended for that purpose and whether there are any ethical or other restrictions on sharing it. The computerization of our work environment mustn’t lull us into neglecting data security. We have to raise awareness of data security issues.

How do you plan to accomplish that?

Thomas Sutter: We will launch data security campaigns. In addition, in the future, a chief information security officer will be in charge of dealing with data security at UZH. The Executive Board recently decided to set up this position at the University of Zurich.

Cybersecurity is one of the many subjects that are gaining importance as our working and living environments become increasingly digitalized. Does UZH have a digitalization strategy?

Michael Schaepman: Yes, we do. We want to digitalize many current administrative processes to save staff time. Many repetitive tasks such as checking and validating expense claims and time accounting records, or the process between acquiring external grants and setting up the corresponding cost center, will be automated in the medium term.

In the area of research, on the other hand, we would like to promote interdisciplinarity, for instance by enabling faculties like physics and biology to access each other’s data. Creating secure databases to which everyone has equitable access is a tremendous challenge. The challenges and opportunities presented by digital transformation are being researched in an interdisciplinary fashion at UZH, also in the context of UZH’s Digital Society Initiative (DSI) and in collaboration with other institutions of higher education in Canton Zurich under the DIZH digitalization initiative. But it’s important to know that UZH continues to invest the bulk of its resources in research and teaching, not in digitalization.

How is digitalization changing cooperation at UZH?

Thomas Sutter: What’s fascinating is that developments in the workplace are coming from two sides. On one hand, staff and students – the digital natives – have clear expectations about infrastructure. At the same time, though, newly implemented tools are being used again and again for entirely different purposes than originally conceived. A lot of creative potential exists there that can even lead to efficiency gains. Take Microsoft Teams, for example. We initially made that tool available for videoconferencing, but new ways of using it have emerged in the meantime, such as cross-team usage of the data repository, for instance. This kind of tool-use innovation has very much taken on a life of its own.

The lockdown blindsided us as a society. Solutions for working together digitally had to be devised quickly. How are UZH staff and students coping with the current situation, which has compelled many to work and study from home again?

Thomas Sutter: It’s remarkable how quickly students and staff have acclimatized themselves to the circumstances and are using new tools with natural ease. That’s fantastic in itself. The big leap, though, took place in our culture.

Thomas Sutter: We broke habits and rethought things that had previously been taken for granted. Opposition to working together digitally was also broken down in a certain sense. Things, including internal matters, that absolutely had to be handled in physical presence before are now being done online.

Will we continue to work more often from home in the future?

Michael Schaepman: At the moment UZH plans to make home-office and onsite work more flexible. The advantage is that this enables people to allocate their time more effectively. However, working from home also has drawbacks when it comes to building a community. How can I gauge how a department is functioning if I’m always working from home? Right now we don’t exactly know yet how we’ll manage the hybridization of the workplace.

Thomas Sutter: Many people in the UZH community are keen on working from home. I have conducted two surveys of around 100 UZH staff members. Roughly half of them would like to work much more frequently from home than before.

Is the rapid increase in digitalization changing our personal work behavior?

Michael Schaepman: Let me ask you a counterquestion: How well would this interview work online? We are reaping benefits from the forced digitalization caused by the coronavirus pandemic. Today staff and students are much better able to assess what they can and can’t do digitally and are better able to explain why. In this sense, the Covid-19 pandemic is a mass digitalization experiment. We were forced into a behavioral modification that otherwise would have taken much longer to achieve through a planned cultural transformation.

How will digital transformation change teaching in the long run?

Michael Schaepman: In the realm of education, the big question is to what extent in-person classroom teaching fosters learning. Or conversely, what are the benefits and drawbacks of switching classroom teaching to hybrid models or to online teaching? How much added value do we create for students if they learn remotely from home and are not taught in classrooms or lecture halls at UZH? We can’t form a judgment on that until after a critical evaluation has been carried out. My personal opinion is that in-person classroom teaching is irreplaceable because without it, crucial elements of social interaction and spontaneity would be lost.

Where do you see digitalization in 2030? What will researching, teaching and working at UZH look like a decade from now?

Michael Schaepman: I hope that ten years from now students at UZH will be able to store all of their personal data and documents – from lecture notes to graduation diplomas – in a blockchain. We need a certified technology that enables students and graduates to show everything they have accomplished and that stores this information for future access. I also hope that we at UZH will continue to read books and to conduct research in the field, expeditions and laboratory experiments.

Thomas Sutter: My hope is that ten years from now, students, instructors and other staff members will experience UZH not just as a place for acquiring specialist knowledge, but also as a place to learn and come to appreciate state-of-the-art digital skills and tools.

Tips on how to protect yourself from phishing scams and malware are available in this fact sheet and checklist.