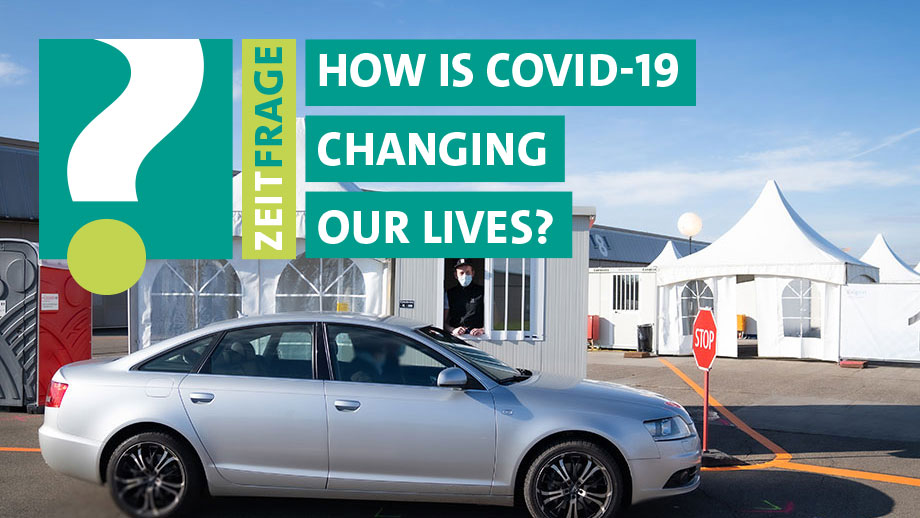 The tarmac in front of Hangar 8 on the Dübendorf military airfield is currently traversed not by airplanes, but by passenger cars heading for the new Corona Drive-in Test Center. The newly opened center is jointly operated by Balgrist University Hospital, the Air Force Center and the UZH Space Hub on behalf of the Canton of Zurich’s Department of Health. For a week now, people with symptoms have been tested for coronavirus infection without having to leave their cars. And in addition to PCR tests, rapid antigen tests will now also be offered, enabling visitors to receive their test results by e-mail within two hours.

The Air Force Center has the appropriate infrastructure and staffing resources to operate the test center. Balgrist University Hospital is responsible for overall management, while the UZH Space Hub, under the leadership of anatomy professor Oliver Ullrich, is involved in the project planning, organization and staffing. By helping to build and operate this new test laboratory in Dübendorf, the UZH Space Hub – which usually focuses on aerospace research – is thus providing a vital service for the local population.

It became apparent from the test center’s very first week of operations that there was great demand for the corona tests. While initially 80 people were tested per day, after three days the number had risen to more than 300. The plan is to continuously increase testing capacities – to around 500 tests a day. This will relieve pressure on hospitals and doctors’ practices. The drive-in concept also helps to reduce the waiting time for a test appointment.

A broad use of rapid tests will also benefit the aviation and travel industry in the medium term, believes Oliver Ullrich: “The International Air Transport Association is currently trying to get the validity of rapid tests recognized internationally, since the compulsory quarantine for travelers stipulated by many countries is the main reason for reduced international travel, which also has a negative impact on research.”

In the space of a few days, Oliver Ullrich, together with Cora Thiel and her Space Hub research group, set up a test laboratory for evaluating antigen tests in the hangar of the airfield. The life science team’s experience in organizing missions means they are used to building functioning field labs and establishing reliable work processes in a short space of time and under challenging conditions. “We’ve risen to similar challenges in different parts of the world several times in the past 15 years. We are glad that we can now put our routine in setting up and conducting large-scale space experiments and our well-rehearsed working methods directly to work in the fight against the pandemic,” says Oliver Ullrich. “Checklists are just as helpful on the ground as in space,” he adds with a wink.

Ullrich’s team is also responsible for taking samples and conducting and documenting the tests, as well as deploying staff. Currently around 25 people work on site every day – both medical professionals and students. “We couldn’t operate the test center without the many UZH students who responded extremely quickly to our appeal,” says Oliver Ullrich.

In total, around 150 UZH students are working at the drive-in test center. Depending on their prior training, they are given medical, administrative or organizational tasks. Advanced medical students perform nasopharyngeal swabs, for example, while students of biomedicine or biochemistry take on laboratory tasks in the hangar – led by experienced molecular biologists and lab technicians. “I’m extremely proud of our students, who were not only willing to help in such large numbers, but who also bring with them fantastic commitment, high levels of professionalism and an incredible team spirit,” concludes Oliver Ullrich.

If you wish to be tested at the new drive-in test center, you first need to fill out the online form on the website and make an appointment. Bring your official ID card and health insurance card to the test appointment.

- You can be tested in Dübendorf if:

- you have been instructed to take a test (i.e. you have Covid-19 symptoms; on the recommendation of a doctor or the FOPH coronavirus checklist; in case of suspected infection);

- you are planning to travel to a country which requires proof of a negative test.

To the test center

As an innovation cluster for aerospace at the University of Zurich, the UZH Space Hub combines internationally networked research with new partnerships from science and industry and brings them together in the Zurich Innovation Park in Dübendorf. It is a hub for expert knowledge and projects in the fields of medicine, earth observation, space life sciences, astrophysics and aviation. www.spacehub.uzh.ch