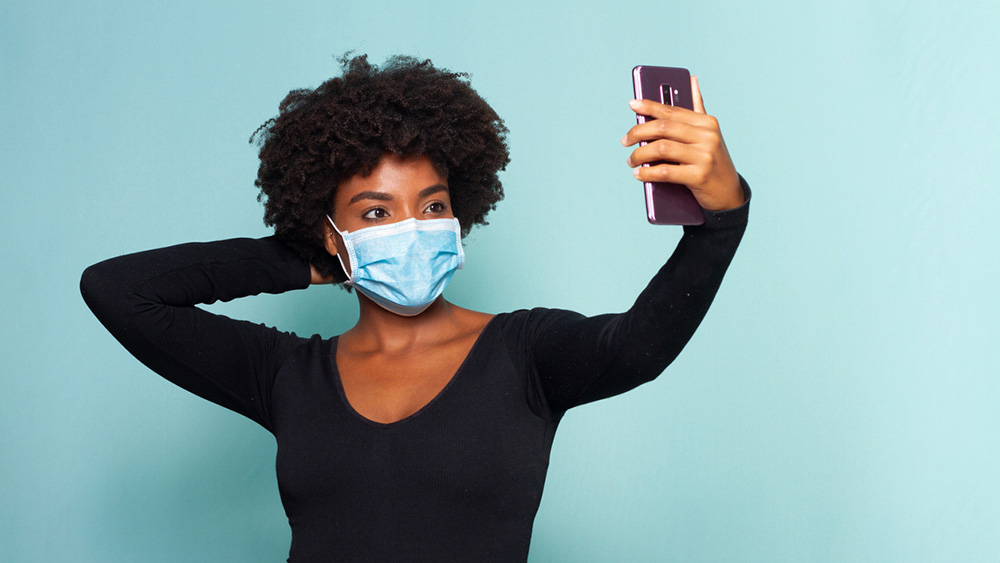 Selfie with mask
“The neo-liberal diktat of self-optimization has a firm grip on us.” Clarissa Schär, Educational Scientist (Image: iStock/ Marcos Homem)

Do I look like Kylie Jenner? Have I got Toni Mahfud’s style? Do those names mean nothing to you? Never mind. For many youngsters, however, these influencers are the measure of all things, the gold standard by which they are guided and against which they gear their own appearance and outfit. These social media stars shape what a certain group sees as attractive and good.

This is particularly true for adolescents, who are still searching for their identity. The selfie plays an important role in this. It is the mirror in which we hope to recognize ourselves – our own self – and in which we want others to recognize us.

It’s a tricky business though, the self. What most young people reveal in their selfies is not their own “self” as an “unmistakable individual” – we’d all like to be that. What they show, and what manifests itself in the self-portraits, is much rather what’s considered as accepted – within society or within a particular group. This is what Clarissa Schär has found. A teaching and research assistant at UZH’s Institute of Education, Schär explores how young people portray themselves on social media: “Most selfies are based on accepted ideal body images,” says Schär. These are “reproduced and fulfilled”. This also applies to gender images and roles. In other words, most young people strive to conform to certain norms. Inventive and individualistic solo runs are rare. Those who broadcast themselves on social media generally do so in a conformist manner. Only a very few consciously question and play around with societal norms and ideals.

In most cases, the selfie is an act of conformism, of complying with predefined norms that we more or less willingly subject ourselves to. Scientifically, this can be labeled as “subjectivization”. This, according to Schär, is our common fate: “No one can escape from subjectivization. We all follow socially predefined patterns.” We have to, in order to be recognizable, says Schär. Put differently, we have to submit to certain social patterns, we have to adapt to fit the mold, in order to be recognized and accepted by those around us.

This is a big challenge, especially for young people, explains Clarissa Schär: “They have to deal with the physical changes, find an apprenticeship, a place within their peer group and within society.” Partly due to social media, a person’s outer appearance plays a much more significant role in this than it used to: “The neo-liberal diktat of self-optimization has a firm grip on us.” What’s desired is a fit, standardized body, perhaps with a six pack or duck face.

To be guided by ideals which most people don’t conform to – that sounds rigid and constricting. Our self in the straitjacket of societal norms – and not just in real life, but also in the supposedly limitless expanses of the World Wide Web. But, says Schär, selfies are also an act of imagination. Now that sounds encouraging: Is there still hope, after all, for something akin to expression of individuality via self-portrait?

According to Schär, the act of imagination lies in the opportunity to present a side of ourselves that we can, but don’t have to, embody. “The selfie enables us to create a ‘possibility space’, to construct a biographical narrative about ourselves.”

So, what’s this possibility space all about? Schär cites the example of a teenage girl who was less stressed for once and therefore was also free of acne. She photographed herself, without filter, thereby capturing that happy moment for herself. Look, that’s what I can be like, was her message – to herself and to everyone she knew. And then there was the teenager with scoliosis, curvature of the spine, for whom the photo showing her with a straight, upright posture was particularly important. Look, that’s what I can be like! So, selfies can certainly help us re-imagine ourselves in a positive way. This reinforces our self-esteem.

The broadcast self-portrait serves to affirm our sense of self in the resonance chamber of social media. Has my new profile picture been well received? The more likes the better. Likes mainly serve as “friendship validation”, says Schär. If there are no reactions, the communication has failed. The relevant image is then quickly deleted again as a rule. Conversely, Clarissa Schär tells of a teenager who no longer likes one of her selfies – but doesn’t delete it because it got so many likes. Other people’s reactions dictate what is good, and we adapt our behavior and our outfit accordingly.

Much of what was once beautiful and good is cast aside again. This applies to the hairstyles and clothes of the influencers and it applies to the photos of ourselves, especially with young people. “Many delete older photos because they no longer correspond to the image they have of themselves,” explains Clarissa Schär.

In the same way as we work on our life scripts, which can rapidly change with young people, we also fashion the image of ourselves that we show to the world. But is the image that appears as a selfie on social media really a reflection of our self?