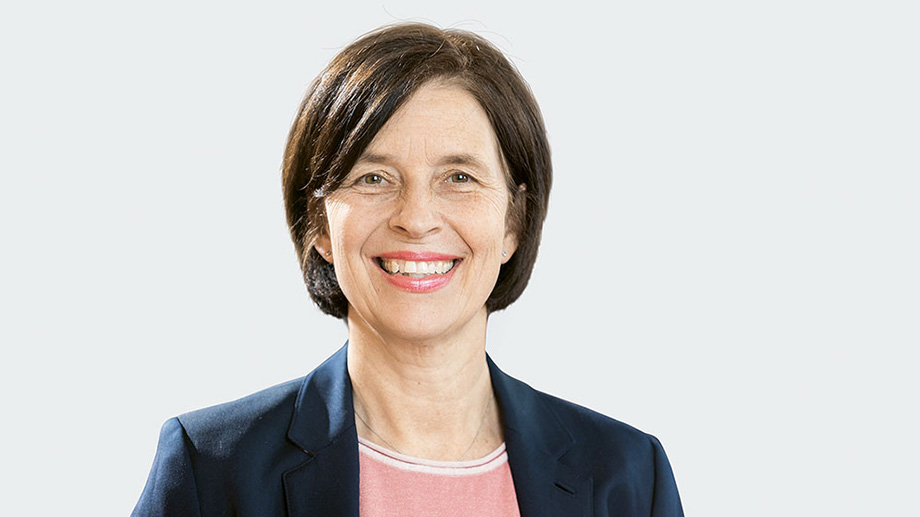 (Short descriptions of the new URPP can be found at the end of the interview.)

Dr. Beck Schimmer, UZH is set to launch its third round of University Research Priority Programs. The URPP seem to be a model of success. Why is that?

Beatrice Beck Schimmer: The URPP strengthens the research profile of UZH as a comprehensive university. Top scientists from a range of disciplines join forces to grapple with complex issues, and the impact is exponential: Their different ways of thinking cross-fertilize each other, ultimately leading to new explanations and solutions.

There's also the fact that the URPP allow us to strike a balance between established research and high-risk research. We're continuing to expand existing fields and boosting their visibility while promoting innovative approaches to research. I find this mixture very important, and it makes the URPP an ideal funding instrument.

How would you rate the success of the current URPP?

The URPP that are currently running have made a significant contribution to UZH’s visibility and reputation, both at home and abroad. For instance, the Global Change and Biodiversity URPP has become a beacon of research with international reach. Thanks to the interdisciplinary work within this URPP, the University was able to take over bioDISCOVERY, an international, award-winning program that fosters global research projects with the aim of monitoring changes in biodiversity and improving our ability to understand and predict developments in this area. This URPP has made UZH a global hotspot for biodiversity research.

Another successful example, this time with national impact, is the Financial Market Regulation URPP. Researchers took an active part in the public reckoning that occurred after the financial crisis and became in-demand experts in the Swiss finance landscape. Representatives from the Faculty of Law and the Faculty of Business, Economics and Informatics also critically monitored the process for the new Financial Services Act and Financial Institutions Act.

Now there are new research priorities, for instance on reproductive decisions, the foundations of our learning abilities, and rare diseases. How were these topics selected?

The degree of current relevance that a research topic has was a decisive factor. As a university, we also have a duty to look ahead to socially relevant questions, to illuminate these issues and provide answers.

For the programs you mentioned: While today's reproductive medicine is very advanced, there are many questions that remain unanswered – not only in a medical sense, but legally, sociologically and ethically. Learning ability is another socially relevant issue that we would like to improve our understanding of, for instance in order to draw useful conclusions regarding learning disabilities.

And with the URPP on rare diseases, we are expanding our successful research activity at the University. This URPP will advance the development of new treatments and also create an interdisciplinary network for answering the ethical, legal and pedagogical questions that surround the issue of rare diseases. There are also plans to launch awareness raising initiatives about rare diseases.

What kind of performance record do the URPP have to have on behalf of the University?

After a period of four years, each URPP is evaluated by external experts who focus on the following criteria: What kind of scientific achievements does a particular URPP have under its belt? What is the national and international perception like? And what’s the added value of the program – meaning, what synergies have arisen from the collaborations that otherwise wouldn't have been possible? Last but not least, we also evaluate to what extent a URPP promotes junior academics.

How do young researchers benefit from the URPP?

We are able to create new positions for doctoral students, postdocs and assistant professors via the URPP. On a personal level, young researchers have the advantage of being able to make their mark in interdisciplinary research groups, meaning you don't have to transfer to another university in order to dive into another area of research – you can have this experience within the URPP network.

How much money has been budgeted for the URPP in total?

Each new research priority program receives an average of CHF 1.7 million annually in the initial phase. In the second phase starting in 2025, they receive around CHF 3 million per year.

What is going to happen to the URPP that are currently running? Does the University have plans for their continuation?

The idea is for the networks and structures generated within the projects to solidify over the course of the program – be it, for example, through establishing professorships, the joint use of technology platforms, or equipping joint institutes and research centers. Take, for instance, the successful network that arose within the Translational Cancer Research URPP. It unites numerous scientists in basic research from medicine, biology and the clinical research groups at the university hospitals and has now been merged into the recently founded Comprehensive Cancer Center.

The act of learning changes the neural networks of the brain. However, the genetic, molecular and cellular processes that form the basis of learning are only partially understood. The goal of the Adaptive Brain Circuits in Development and Learning URPP is to investigate how these neural networks form and how they contribute to specific behaviors in humans and different animal models.

Digitalization is also influencing the religious community and its behaviors. The Digital Religion(s) URPP is investigating how digitalization is shaping religious practice by individuals and institutions, looking at examples in church service, pastoral care, grief counseling and the formation of religious networks.

Factors such as sex, religion, ethnic background, country of origin and familial wealth can lead to significant differences between segments of the population. The Equality of Opportunity URPP aims to research the economic and social changes that lead to inequality.

Reproduction is no longer just a question of fate but is now often the result of a conscious decision. The Human Reproduction Reloaded URPP is exploring the decision to become a parent: its legal, medical and social preconditions, as well as its consequences for individuals, families, society and the economy.

There is a great need for new therapies to treat rare diseases as well as initiatives that raise the public’s awareness of these conditions. ITINERARE: Innovative Therapies in Rare Diseases – Challenges and Opportunities is a URPP that seeks to advance the development of new therapies for treating rare diseases while also trying to answer the ethical, legal and pedagogical questions that surround these illnesses.

The eight URPPs from the second round of the initiative will run until the end of 2024.