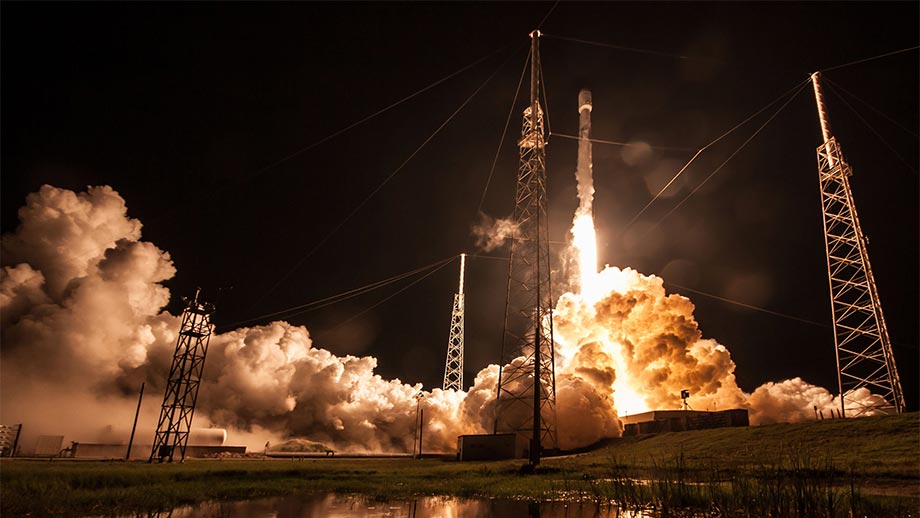 Rakete
On 6 March 2020 at 23.50 the launch vehicle took off from Cape Canaveral with the spaceship Dragon - on board 250 test tubes with stem cells from UZH. (Image: zVg.)

On the Tuesday before Easter, some 800 kilometers off the coast of California, a space capsule attached to three brightly-colored parachutes glides down towards the Pacific. The Dragon space capsule is returning valuable cargo to earth: 250 test tubes containing human stem cells that spent a month orbiting our planet at an altitude of 400 kilometers on the International Space Station ISS. The recovered tubes are shipped to Los Angeles and then flown across the country to Florida, where they arrive at the Kennedy Space Center on Good Friday. The next day, two scientists remove the screws from the lid and open the box. It is the moment of truth.

Far away in Zurich, Oliver Ullrich holds his breath. The professor of anatomy at the University of Zurich is the director of the UZH Space Hub (see box). The experiment with stem cells on the ISS is his brainchild, and that of his colleague Cora Thiel, a molecular biology researcher and head of the Institute of Anatomy at UZH. The two scientists and their team hope that their space project will provide new insights into how gravity influences the development and functioning of cells.

This question has been on Oliver Ullrich’s mind for the past 16 years. Ullrich, who also teaches in Jena, Magdeburg and Beijing, first investigated the behavior of cells in the absence of gravity at the Otto von Guericke University Magdeburg in 2004. “I hadn’t expected that the cells would react so strongly to weightlessness. These weren’t minor changes, but fundamental processes.” Ullrich quickly recognized the potential benefits his discovery could have for the manufacturing of tissue structures.

In conventional labs, human tissue is usually grown with the help of a so-called matrix. These tiny structures support the growing cells and protect them from being crushed by the forces of gravity. “This is anything but natural, of course,” says Oliver Ullrich. After the first few experiments, the UZH professor was convinced that it should be possible to manufacture human tissue in 3D without any additional matrix or other auxiliary structure – in other words, using a much simpler and possibly cost-effective method.

In 2019, Ullrich and Thiel started working on a simulation study on the ground in Zurich. While it isn’t possible to truly replicate weightlessness down here on earth, it is possible to keep objects – in this case human stem cells – suspended in a rotating liquid. Their study was a success, managing to manufacture small tissue structures without the use of a matrix.  Parabolic flights, which simulate weightlessness using special aircrafts, were out of the question for the second phase of testing. The weightlessness reproduced by these flights only lasts for about 20 seconds, which is not nearly long enough for stem cells to grow into tissue.

So the researchers decided to go from the ground straight to space. “It sounds more complicated than it really was,” says Ullrich. The University of Zurich entered into a partnership with aerospace company Airbus Defence and Space. “We supplied the biotechnology, Airbus the hardware, and we split the project costs.” Airbus had put out a call for applications for its funding program promoting innovation in space, and as one of the best ranked among the 500 submissions, the UZH project was chosen to take part. The team of UZH researchers thus spent the second half of 2019 preparing for their flight to space. “We tested every single step, again and again,” says Oliver Ullrich.

The 250 test tubes were booked onto the SpaceX CRS-20 re-supply flight of 6 March 2020. One month before the flight, the Zurich-based researchers started prepping the stem cells – pluripotent stem cells from human bone marrow that would develop into bone, cartilage, fat or liver tissue, depending on which “growth cocktail” they were given. The “growth cocktail”, as Oliver Ullrich puts it, was a mix of artificial neurotransmitters and other substances that correspond to those in the human body and determine which type of tissue the stem cells will grow into.

The team of Ullrich and Thiel filled the samples into test tubes shortly before the take-off date, placed them into an Airbus-developed mobile CubeLab module, and handed the whole package over to NASA. Then the anxious waiting began. It is not uncommon for spaceflights carrying cargo to the ISS to be delayed, but “live cells can’t be stored away in a warehouse for a week,” says Ullrich. As a precaution, the researchers had thus grown replacement cultures at three-day intervals.

Luckily though, everything went according to plan and the two-stage space vehicle carrying the Dragon space capsule launched from Cape Canaveral at 11:50pm on 6 March 2020. Busy with work in Zurich, Oliver Ullrich was unable to be there in person. But did he at least watch the launch on NASA Television? “I can’t image anyone from our team missing out on such an event,” laughs the professor.

Two days later, the Dragon capsule docked at ISS. The ISS crew stored the cargo from Switzerland in the space station’s lab, along with other research objects from other countries. That’s all the crew needed to do, as the tissue would simply grow on its own – or not. But grow it did. A few weeks later, when Ullrich’s team lift the lid from the box containing the 250 test samples, they immediately recognize the type tissue. Floating in the nutrient fluid are small lumps, rather than just cell fibers – proper pieces of tissue, larger than the ones from the previous simulation study on the ground.

The Zurich researchers’ plans, however, were almost foiled by the coronavirus pandemic. The United States banned incoming travel before the Easter weekend, the transport of the samples from California to Florida was in doubt, and the labs at the Kennedy Space Center stayed closed. Fortunately, US authorities ignored the red tape and acted swiftly. Armed with a plethora of special permits, Ullrich’s team was allowed to fly from Zurich to Miami and pick up the samples that had returned from space. Before setting off from Zurich, they had self-isolated in their homes for two weeks.

Following the initial inspection, the 250 samples were frozen in liquid nitrogen on Easter Sunday. The goal is to return the samples to Switzerland one day, but for now the researchers have put their plans on ice, so to speak. “We don’t want the cells to get stranded at an airport, where they might thaw and go to waste,” says Oliver Ullrich. Once the samples eventually arrive back in Zurich, the researchers will perform a histological and biomolecular analysis of the grown tissue.  They will also sequence the tissues’ genome, since the cells spent one month in space and were exposed to cosmic radiation. “After all,” says Ullrich, “we don’t want to implant cells with damaged DNA.”

From dreamer to visionary

Of course, there is still a long way to go until implanting this tissue becomes a reality. For now, the next step is to take the leap and turn the research project into a business model. In other words, found a spin-off company, find investors and move the manufacturing of tissue in space to the production stage. Oliver Ullrich is confident that they will succeed. “We don’t have to go straight to transplanting. Tissue samples can also be used to test drugs, and there’s a sizable market for this today.” This is hardly surprising, since it enables thousands of tests on animals to be avoided.

But what about the costs? “Space travel is no longer the money-guzzling race between countries that it used to be,” says the anatomy expert with a smile. According to Ullrich, if the CubeLab module can be amortized by regularly manufacturing tissue and the whole procedure can be simplified, all that is left to pay are the costs for space travel. A return ticket from Florida to the ISS costs about USD 5,000 per kilo, and one kilogram can hold many samples. Add to that the salaries of a two-person team to ready the samples for the flight into space and collect them again afterwards. “If you add up the costs, you get figures that are well within the limits for medical interventions.” And they may even be lower than the costs for tissue culture in labs down here on earth, which is a complex process.

Oliver Ullrich has gone from dreamer to visionary. As a boy, he was fascinated by glittering spaceships and far-away galaxies; everything beyond our planet sparked his interest. Today, he no longer considers the altitude at which space stations such as the ISS orbit to be space. “For me, low earth orbit is a part of earth,” says the director of the UZH Space Hub, “it’s not like we’re dealing with the stars in outer space.” Ullrich believes we should not only think of low earth orbit as a place of research, but also use it as a routine place for industrial production. Weightlessness can be beneficial for many manufacturing processes, for example alloying metals or developing drugs. “We need to reframe our thinking,” says Ullrich. “Low earth orbit is not much further away from Zurich than Geneva.”

The Swiss aviation industry was launched in a field near Dübendorf some 100 years ago. In 2018, construction work on the Innovation Park Zurich started at the edge of the military airfield in Dübendorf. This is also the home of the Space Hub of the University of Zurich, as air and space travel is one of the four focus topics of UZH’s Innovation Hub (www.innovation.uzh.ch)

The site has a long tradition of pioneering spirit, from the early days of aviation to today’s scientists conducting groundbreaking research in the fields of aviation, space travel, medicine, robotics and astrophysics. Their interdisciplinary work ranges from basic research to product development in cooperation with start-up businesses and industry, with ETH Zurich and the Swiss Federal Laboratories for Materials Science and Technology (Empa) also among the Space Hub’s partners.

“Innovation needs the right environment so that fledgling ideas aren’t grounded by small-mindedness and lack of confidence. Cooperation between the Innovation Park and the Dübendorf airfield has tremendous potential, which can be fully unlocked through curiosity, knowledge, skill and a willingness to take risks,” says Oliver Ullrich, UZH professor and director of the Space Hub. Ullrich has led around 20 projects involving parabolic flights and a dozen missions in the earth’s orbit. He has an extensive network in the field of air and space travel and his research is supported by NASA and ESA, among others.

Switzerland is a founding member of ESA and is considered one of the pioneering countries of European space travel.