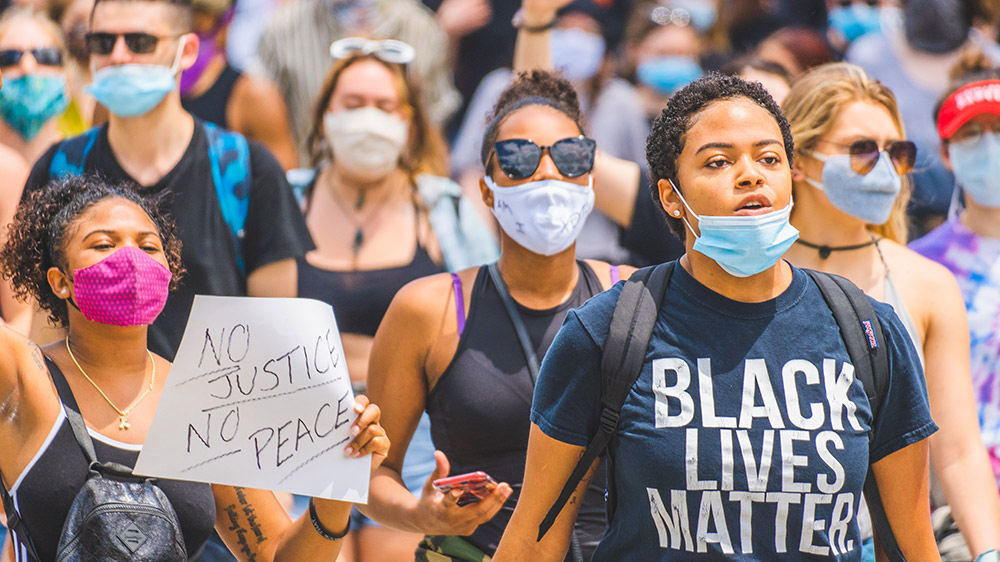 Katja Rost, the video of the death of George Floyd has galvanized many people into action – including in Switzerland, where thousands took to the streets to protest racism. Why are these global protests happening now?

Katja Rost: The protests had been on the cards. In the United States, racism against black people is part of everyday life, and this became all too apparent during the coronavirus pandemic. The Covid-19 mortality rate is much higher among black people, because due to their life situation they are unable to protect themselves as well as white people. But this discrimination runs through all areas of US society and can be found in education, in health care and at the workplace. Many black people are stuck in a circle of poverty and live in neighborhoods with high crime rates. If you grow up in such circumstances, it’s clear that equality is unachievable. Moreover, social inequality in the US has increased dramatically over the past few years. The video of George Floyd showed the brutality that black people are faced with on top of that. His death thus triggered a global discussion about police brutality in the US and racism.

What role did social media play in galvanizing so many people?

The video of George Floyd dying, under the knee of a white police officer for nearly nine minutes, spread across social media like wildfire. It took on key significance and became a symbol of injustice. What’s new is that the protests that followed were broadcast on mass media. Liking a tweet on Twitter doesn’t cost much time or effort, and won’t be punished or sanctioned either. But only a very small part of the movement took to the streets, while most of the protesting took place on social and traditional media. In conclusion, the protests have given civil society a means to make themselves heard and compel policy-makers to act.

Are there parallels to other movements, such as the Fridays for Future protests?

Yes, I see a connection. The Black Lives Matters protests, the Fridays for Future movement, the women’s strike – they all share certain features and are comparable in their effects to the #MeToo debate. These initiatives that emerge from civil society are very powerful nowadays, and have started to play a role in shaping politics. They’re about embracing diversity, but also about equal opportunities. Inequality is a major topic in our society, especially among young people.

When you say young people, which generation are you referring to?

Here in Switzerland, it’s the generation that grew up in great social stability. Equality and fairness are crucial values for members of this generation. I also see this at UZH, with my students.

What can science contribute to the debate about racism?

Research on racism is important and necessary, and has a very long tradition in sociology, but also in cultural studies as well as other fields. The mechanisms that lead to racism are well documented.  Racism is created through processes of categorization and stereotyping. But there’s also evidence that not everything is down to discrimination. For example, the crime rates in certain neighborhoods in the US are high and it is dangerous in those areas.  It’s an unfortunate confluence of different circles. In other words, if you happen to be born into an environment of crime and poverty, you’re more likely to turn to crime. One major problem – here in Switzerland, too – is the lack of socioeconomic diversity, which gives rise to inequality. There’s a lot of strong research into this topic that goes well beyond the morally charged debate that’s going on at the moment.

What is UZH doing to combat racism?

Discrimination is far less likely to occur at universities than in other parts of society. But you have to be careful, as discrimination is rooted in everyday racism, which is often subtle and difficult to trace.

With our UZH Diversity Policy, we have an effective tool at our disposal here.  This policy puts diversity and equality on the agenda of line managers and makes it unequivocally clear that discrimination, sexual harassment and bullying will not be tolerated at UZH.  Organizational research confirms that a policy is an effective tool. To initiate important change process, we need rules – the more universal, the better. You might be familiar with the Rule of Saint Benedict, a book of precepts for monks. Thank to this set of rules, the Benedictines are one of the oldest organizations still around today. The implementation plan for the Diversity Policy features key measures to counter discrimination. Having the university-wide topic of diversity within the immediate remit of Gabriele Siegert is also very helpful when it comes to coordinating and implementing these measures.

Should UZH do more?

UZH embraces diversity, and there are many instructors and students from different cultures with diverse backgrounds from all over the world. And yet, there is a topic that seldom gets mentioned – the uneven educational opportunities. Many of our students come from wealthy, well-educated homes, and hardly any of our doctoral candidates or professors have a lower middle-class background. But that’s an issue that concerns the whole of society.

What can each and every one of us do to stop racism and prejudice?

Let me first say that prejudices and stereotypes are vital, as without them we’d be completely overwhelmed in our everyday lives. But prejudices don’t come from nothing. It’s important that we revisit thought patterns that we’ve internalized, and this includes asking ourselves which social bubbles we live in and which opinions we choose to ignore. We know that these filter bubbles have increased rather than decreased as a result of social media, and researchers can sometimes get stuck in such bubbles, too. At higher education institutions, it’s important that we engage in constructive discourse that is free of pigeonholing. And this also means allowing uncomfortable opposing views without resorting to the same intolerant patterns of whoever’s attacking you.