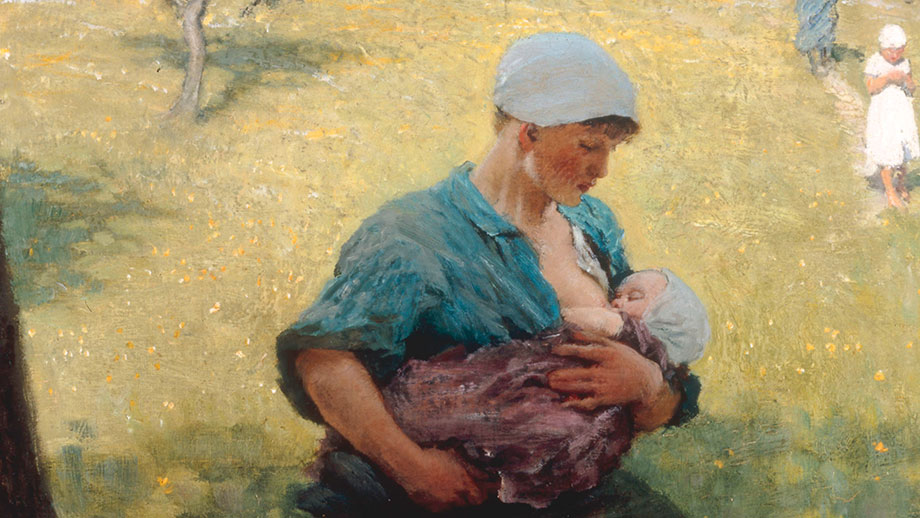 It was 15 years ago, when Thierry Hennet had his brilliant idea in a cold storage room at the Institute of Physiology of the University of Zurich – and that at minus 20 degrees. On a shelf in the cold chamber he noticed, almost forgotten, rows of large bottles filled with breast milk. "A colleague had been given large quantities of the milk for a research project in the 1980s," says Hennet, "and about 50 liters were left over. Knowing that breast milk contained sugar molecules similar to those he was researching, Hennet decided to start exploring the maternal elixir. For centuries, breast milk has been steeped in myth. In the Middle Ages, for example, colostrum – the milk produced in the early days after birth – was believed to be pus, and therefore unhealthy. For a long time, it was also common for mothers to hand their children over to wet nurses who were paid to feed the baby from their own breast. The distance this provided between mother and child was positively welcomed.

How things have changed! Today breast milk is seen as some kind of magical potion, colostrum as particularly healthy, and the close physical contact during breastfeeding as beneficial for the bond between mother and child. "Breast is best" as the slogan goes. "Breast milk has always been subject to superstitious belief," says Hennet. And this is still the case today. Once mistakenly considered harmful, there is now a tendency to glorify it. And some qualities attributed to breast milk – that breastfed babies are more intelligent, for example – have no scientific base.

So how healthy is breast milk really and how important is breastfeeding? How long should babies be breastfed? What are the alternatives for mothers who cannot or do not want to breastfeed? These are the questions that Thierry Hennet is eager to answer. As a basic researcher, his findings can help bring some rationality to a discussion often biased by ideology, religion and sometimes superstition.

Hennet's research focuses mainly on the protective functions of breast milk. It is known that breast milk not only nourishes babies, but also protects them from infections. This is due to the antibodies and complex sugar molecules in the milk that help colonize the intestine with "healthy" bacteria. "Mothers pass on their immune system to the infant. This means that the newborn baby is also protected from infections that the mother has already had," says Hennet.

It is for this reason that breast milk is the best nutrition for newborns. "It is the result of tens, even hundreds, of thousands of years of human evolution," says Thierry Hennet. Nowadays, mothers who cannot or do not want to breastfeed their babies usually give them a bottle containing artificial milk powder mixed with water. This substitute milk has many nutrients, but does not provide the same immune protection.

Does this mean that children should be breastfed for as long as possible? While this is the opinion held by breastfeeding dogmatists, Hennet begs to differ. In fact, the number of antibodies in breast milk decreases by approximately 90 percent after only three to four months. And after six months, the baby's gastric juice becomes acidic, facilitating the absorption of solid food, but killing many of the breast milk's antibodies. In other words, after three or, at the latest, six months of breastfeeding, the baby is sufficiently protected.

The changing composition of breast milk

Hennet's aim is to use his research to help mothers who cannot or do not want to breastfeed by identifying the molecules in breast milk that are responsible for preventing infection. Even today it is still not entirely clear how breast milk protects babies from sickness, in part because of the sheer complexity of its composition. Breast milk is made up of proteins, fats, carbohydrates, water and minerals. Not only do all these macromolecules have numerous components but, added to this, the composition of the milk changes constantly.

In the first few days after birth, breast milk contains an especially high number of antibodies. After a few days, the ratio of fats and carbohydrates increases, followed later by proteins. This ensures that the baby's growing hunger is satisfied. However, the breast milk "recipe" changes not only over the course of weeks, but within minutes. For example, the sips that a baby drinks at the beginning of a breastfeed contain less fat than the milk consumed at the end.

In order to determine the protective functions of breast milk, Hennet and his team first separate specific antibodies and oligosaccharides (complex sugar molecules) – the ingredients known to play an important role in the infant's immune system. In several studies over the last few years, the researchers have been able to show how many of the approximately 200 oligosaccharides contained in breast milk promote the growth of healthy intestinal bacteria and inhibit the growth of pathogenic, harmful bacteria.

The researchers have also succeeded in tracing the influence of different antibodies on the intestinal flora. In a recent, as yet unpublished, study they can now show that specific antibodies can dock onto both "healthy" and harmful bacteria. This is possible because some of the many billions of bacteria in our gut have the same surface features. "This explains how newborns are protected from bacterial intestinal infections such as salmonella or listeria, even when their mothers have never suffered these infections," says Hennet.

Formula milk manufacturers are hoping that one day they will be able to enrich their products with these protective molecules. After all, the lack of immune protection is the only scientifically proven disadvantage of artificially produced milk over breast milk. But Hennet has to quash these hopes. Even if certain molecules were known to perform important protective functions, it would not be possible to simply extract them from breast milk. "This could destabilize the balance of the whole system."

Why this separation could be problematic is the subject of one of Hennet's most recent research papers. Certain sugar molecules in breast milk have the ability to trigger a domino effect that can ultimately lead to intestinal inflammation. Separating individual molecules from each other could therefore have serious consequences for the baby's intestinal flora.

For this reason, it is likely to take some time before scientists are able to replicate the body's own defenses. "We're still a long way from being able to produce breast milk artificially," says Hennet. However, hope is not lost for mothers who cannot breastfeed. Research findings could one day lead to specific vaccinations for newborns; or babies could be given the healthy intestinal bacteria, normally derived from drinking breastmilk, in the form of a food supplement. This would be Thierry Hennet's dream come true. "Mothers should not be made to feel bad if they can't or don't want to breastfeed."

EXHIBITION IN THE ZOOLOGICAL MUSEUM

From hares to seals to human beings: milk is the life source of all mammals after birth. It is repeatedly referred to as a "miracle juice" or "magic potion" because of the nutrients, neurotransmitters and protective substances it provides that are vital for the survival of the offspring. The special exhibition "Milk – Maternal Elixir" presented in three languages at the Zoological Museum of UZH explores the subject of mother's milk in all its complexity.

A mother's milk is like an individual fingerprint – and this across the animal kingdom. As UZH human biologist Thierry Hennet says: "The composition of breast milk reflects the way a species lives." For example, cow's milk has more protein (so that calves grow quickly), seal milk has more fat (so that the young don't freeze to death) and wolf milk has a wide range of nutrients (because it can take longer for the mother to return from hunting). Human milk is the most complex of all and contains, among other things, many complex forms of lactose essential for the brain.

The exhibition developed by the Natural History Museum of Fribourg also studies evolution. While 200 million years ago the first mammals laid eggs, today around 6,000 species of mammals feed their young with their mother's milk. However, there are still many questions around mothers' milk still unanswered – for example, whether its composition is tailor-made for each individual child. With all these mysteries still waiting to be solved, our fascination for breast milk is by no means over.

The exhibition "Milk - Maternal Elixir" can be seen from mid-September to 26 November 2020 at the Zoological Museum of the UZH www.zm.uzh.ch.