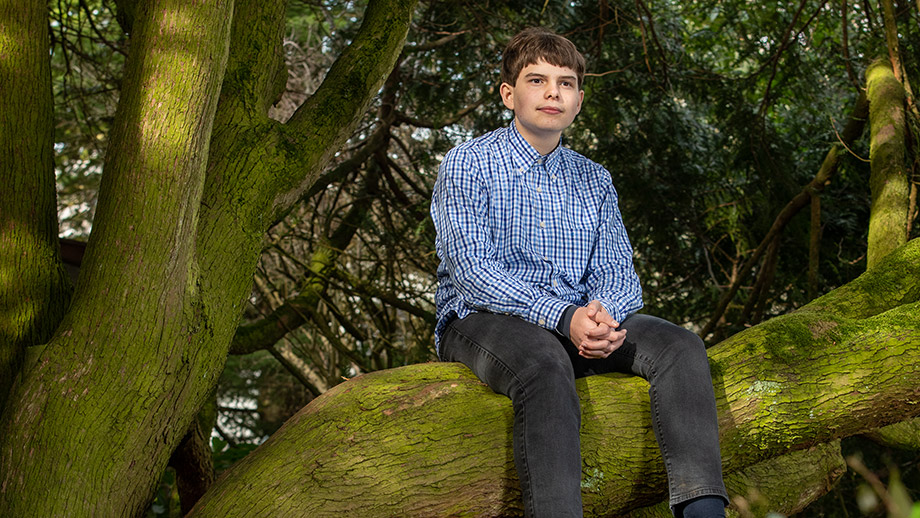 "Right now, it's just good to have a plan for the next four years", Patrick Simonis (16), leukemia patient. (Image: Ursula Meisser)

It's his last hope. On a memorable spring day last year, when driving to the University Children's Hospital Zurich, Patrick Simonis says to his mother: "If this doesn't work, you'll be taking me home to die." Patrick, 16 years old, is suffering from acute lympho­blastic leukemia. For three years, he has been receiving strong medication and injections that cause side effects: Regular bouts of manic depression during the day, sleeplessness at night. Once he collapsed in the middle of the night, was resuscitated and flown to hospital with the Rega rescue service. And sometime later, after a stem cell transplant, he spent six weeks inside the few square meters of a Plexiglas cabin. "When he came out, he was weaker than ever," his mother recalls.

And now the latest attempt – with a new type of immunotherapy named CAR-T, in which cells from his body are to be removed, genetically modified and reintroduced. Patrick Simonis is only the second patient in Switzerland to be treated with this method. Consequently, little is known about the long-term effects of the therapy. Doctors estimate the chances of success at around 50 percent. They also anticipate immediate and severe side effects: The storm that the treatment unleashes in the immune system can be life-threatening.

220 children contract cancer every year. But there is a marked difference between childhood cancer and cancer in adults (see box). Acute lymphoblastic leukemia is the most common type of childhood cancer, with around 60 new cases recorded every year. In this disease, certain white blood cells – lymphocytes – become malignant and proliferate throughout the whole body, preventing the formation of healthy blood.

In the past, a diagnosis like this almost always carried a death sentence. But in recent decades, leukemia therapies have made enormous progress, with drugs discovered in the 1960s, and still used to this day, that can slow down and kill cancer cells. Thanks to these cytotoxic drugs, the chances of a cure – especially in children – are good. About 90 percent of them can be cured with intensive chemotherapy, a combination of different drugs. In some cases, radiation or a stem cell transplantation is also required. Up till now, however, if this standard therapy did not yield results and further relapses occurred, the chances of survival were small.

But this is about to change. Largely due to rapid developments in cancer research and genetic engineering, it has now become significantly easier to manipulate individual cells and genes in the laboratory. With these techniques, researchers around the globe are able to seek new treatments for various types of cancer. However, until these treatments transfer from research into clinical practice, years can pass.

One of the few therapies already approved is CAR-T. Developed a few years ago in the United States specifically for children with lymphoblastic leukemia, its practice has been permitted in Europe since 2018. CAR-T is a cancer immunotherapy, meaning that the body's own defense system is trained to destroy the harmful blood cells. Concretely, certain white blood cells, T-lymphocytes, are genetically modified in the laboratory and targeted at the cancer cells. Antigen receptors dock – like keys – onto the surface of the cancer cells, causing their destruction.

"The new therapy is revolutionary for leukemia patients," says Jean-Pierre Bourquin, professor of pediatric oncology at UZH and senior physician at the University Children's Hospital in Zurich. Besides Patrick Simonis, he treated a handful of other patients last year with CAR-T. But Bourquin admits that not all high-risk patients respond to the therapy. "Cancer cells find different ways to evade the reprogrammed defense cells, and we don't know yet how long leukemia can be kept under control with this immunotherapy." This is why further research in the field is crucial.

The fact that research on childhood leukemia is relevant to cancer research as a whole is demonstrated by a recent breakthrough achieved by Bourquin's team. Thanks to new developments in genetic engineering, the researchers were able to system­atically examine the mechanisms involved in the formation and spread of acute lymphoblastic leukemia. As a result, they discovered proteins in the cell nucleus that fundamentally misdirect the genetic program, thereby actually becoming the drivers of the leukemia.

There was one protein that the researchers knew could be targeted with a specific active substance. After carrying out tests with the substance on mice carrying human leukemia cells, a clear result emerged:  The malignant cancer cells died after being treated with this active substance. This result could form the basis for new leukemia drugs that tackle the disease at its roots. "Other leukemias are probably caused by similar mechanisms," says Bourquin.

Patients with other cancers could also benefit from similar research conducted at the University Children's Hospital Zurich. Once scientists have understood how a cancer develops, specific treatments can be designed. In order to lay the foundation for new cancer drugs, the Children's Hospital is pursuing another approach: In collaboration with other researchers from UZH and ETH Zurich, they have built up a form of library in which hundreds of new active substances are collected and then released on isolated leukemia cells in patients with the disease. "This enables us to also record unexpected treatment options," says Bourquin.

The trial-and-error principle has the advantage of being highly efficient: Because the researchers are dealing with substances that already exist, the basis for the treatment is on hand. This new functional approach has already been applied to therapies for children with incurable leukemia at the Children's Hospital. The tailored treatments are carried out within the framework of international clinical studies.

In the case of Patrick Simonis, the CAR-T treatment is successful, but first he has to spend several months waiting and suffering. Doctors take blood from him and send it deep-frozen in a bag by plane to the United States, where the blood cells are genetically reprogrammed in a lab. After four months, the blood is finally returned. A bed is reserved in the intensive care unit because of the side effects that are expected: The massive decay of the cancer cells releases proteins (referred to as cytokines) which unleash a storm that endangers the immune system. The storm is so violent that many adults would scarcely survive; children, however, are better able to tolerate the side effects. With Simonis, it takes nine days after being infused with the modified blood cells until the storm occurs. He suffers for three days, but his condition is not life-threatening. The following morning, he sits up in the hospital bed and wants to go home.

The cancer is gone

To this day, eight months later, the cancer has not shown up again in Patrick's blood.
Back home, the teenager's next adventure began – the return to normality. Simonis was 16 years old at this point and about to enter professional life. Because he was good at school, he had no major problems making up for what he had missed. With the help of his mother and friends, he was soon even successful in finding an apprenticeship in his dream job – as a draftsman in an architectural office.
Today, Patrick leads a relatively normal life. Every morning he gets up at 5:00 am and cooks rice for his lunch. Then he gets himself ready, packs the hermetically sealed chrome steel container in his backpack and cycles the six kilometers through the countryside to Aarau. Only once a month does he have to go to hospital – for an infusion of a drug that strengthens his immune system, as the cell therapy not only destroyed the cancer, but also benign blood cells.

Patrick Simonis is still not considered cured from a medical point of view, as too little is known about the long-term effects of the still very new therapy. No one can say if or when the cancer might return – tomorrow, in a few weeks, in 20 years. But Simonis has learned to live with this uncertainty. "Right now, it's just good to have a plan for the next four years," he says.

Leukemia – The most common childhood cancer

Children can also contract cancer. Although less common than in adults, cancer is the most widespread fatal disease in childhood and adolescence. However, the disease manifests itself in different forms in children and adult patients. The most common type of childhood cancer is leukemia. One in three children with cancer suffers from this cancer of the blood. Tumors in the brain and bone marrow as well as in the lymphatic system are also comparatively common. By contrast, the most common forms of cancer in adults – cancer of the breast, prostate, intestine, lung or skin – are practically non-existent in children.

The treatment of children with cancer is also very different from that of adults. Although traditional methods remain the same – medication, radiation and surgery – children need specially tailored therapy combinations because of the many rare types of cancer. In addition, the dose or intensity of treatment differs, as small children – half of all children with cancer are under four years old – react highly sensitively to aggressive therapies. Added to this is the risk of long-term complications. Adolescents, on the other hand, can actually be more resistant to side effects than adults. In these cases, more invasive therapies can be considered. One example is the CAR-T immunotherapy, which was developed specifically for children with acute lymphoblastic leukemia (see main text). "The biological basis of children with cancer is very different from that of adults," says Jean Pierre Bourquin, senior physician at the University Children's Hospital Zurich, the largest center for children with cancer in Switzerland. For this reason, there is an urgent need for research focused specifically on childhood cancer. But such research is expensive, and only about a third of the research funding at the hospital comes from governmental sources. "In order to develop and introduce new therapies, we are particularly dependent on foundations, philanthropists and donors," says Bourquin.