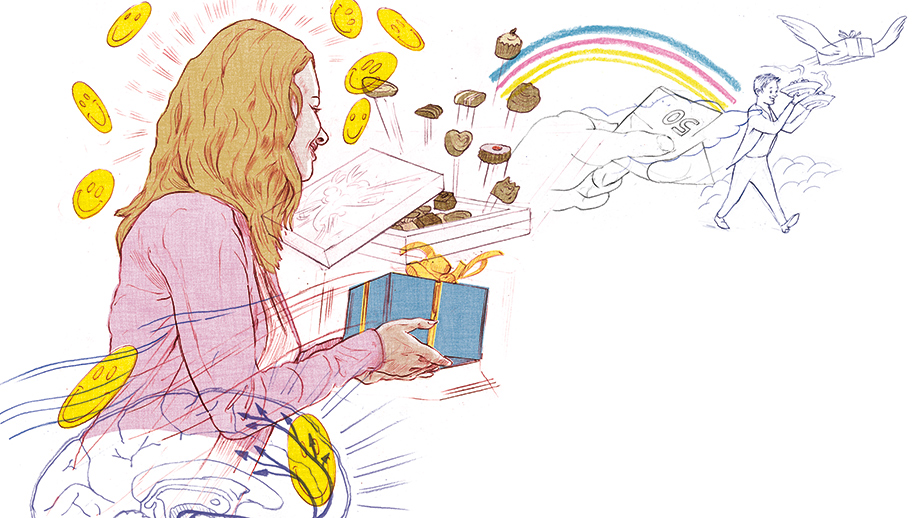 From a scientific point of view, there are several reasons why we are generous. One answer: being generous makes us happy. (Image: Christoph Fischer)

The direct path to happiness, as the past few months have suggested, is bedded on countless plies of toilet paper, cobbled with yeast cubes and sumptuously lined with kitchen herbs. The panic hoarding engaged in during the coronavirus crisis doesn't exactly cast the best light on our ability to share with others. People generally pursue well-being by striving to get the best for themselves, leaving others standing in front of barren shelves now and then.

Generosity appears to be associated mainly with costs; whatever benefits it yields for us are indeterminate in the first place. Yet it's precisely times of crisis that also bring our altruistic side to the fore. We go grocery shopping for an elderly neighbor even though we barely know them. We put on plays for children who are stuck sitting around home all day. We donate money to those less fortunate than us. "The coronavirus crisis has amplified our awareness that we're all interconnected with each other and that our behavior affects others," says Philippe Tobler. "We rely on the people around us, and they in turn depend on us." Tobler is a neuroeconomist at the University of Zurich. He concerns himself with the question of what goes on in the brain when we make economic decisions.

Neuroeconomics is an emerging scientific discipline at the intersection of economics, neuroscience and psychology. Tobler's research often has to do with cases where neuronal processes go haywire, in people, for example, who are addicted to drugs, suffer from schizophrenia or are afflicted with Parkinson's disease. But the scientist also studies the brains of healthy people, and the processes that take place there when we act with generosity are among the things he's investigated.

Science has a variety of answers on hand to the question of what motivates us to act with generosity. Kinship ties surely play a role, or we hope that our giving will be reciprocated in some form or other someday. Perhaps we are even worried about our reputation. Tobler has yet another explanation at the ready: generosity makes us feel happy. "We underrate how giving to others often makes us happier than acting selfishly does," the professor of neuroeconomics and social neuroscience in the UZH Department of Economics says.

In an experiment conducted in collaboration with psychologist Soyoung Park and other researchers, Tobler examined how generosity and pleasure interrelate at the neuronal level. The scientists informed 50 study participants that they would each receive a total of 100 Swiss francs over the next four weeks. They then randomly divided the subjects into two groups. The subjects in the first group each pledged to spend the money on someone else by inviting that person to lunch, for example, or by giving him or her a gift. Those in the second group were told to spend the money on themselves. Afterwards, in a separate independent assignment, all of the study participants were asked to make a decision on the amount they would be willing to spend on someone else; during this experiment, functional magnetic resonance imaging was used to measure the subjects' brain activity (see box).

Tobler and his team discovered, to their surprise, that the binding pledge to spend the money on someone else was already sufficient in itself to induce the same study participants to behave more generously in the separate independent assignment. Moreover, they rated themselves happier than the subjects in the control group. Furthermore, the blissful feeling they reported, which behavioral economists call a "warm glow," appears to have little to do with the objective value of the gift. In other words, whether we bring along a small chocolate bar or an entire box of pralines to share with our officemate over a cup of coffee has no significant impact on how happy we are with ourselves afterwards. Last but not least, the results of the experiment show that generosity is a modifiable and manipulable variable. It can be learned and practiced, chocolate bar after chocolate bar.

Tobler receives a barrage of queries about his research every year ahead of Christmas. That's precisely when fundraising charities wishfully seek answers to the question of what inspires generosity in people. Tobler definitely has a few tips for them. "It's important, for instance, that potential donors know as much as possible about the beneficiary," he says, because generosity normally diminishes as social distance increases. Moreover, donors' expectations shouldn't be raised too high, for example through assurances that a sponsorship could liberate children from poverty straight away. Tobler says that it's better to provide periodic information about what progress has been made as a result of the donation.

How generous we are depends on a host of different factors. There have been numerous studies related to charitable donations and philanthropy, and researchers do not all come to the same conclusion. Some studies suggest that poor people are comparatively more generous than the wealthy because they are more able to empathize with other people's hardships. Other studies arrive at the conclusion that people at either end of the income spectrum donate more than the vast majority in between. Older people generally tend to be more generous than younger ones, though that may have to do with them having more money, in all likelihood.

Gender also plays a role. Women generally are considered more generous than men. Here as well, Tobler teamed up with neuroeconomist Alexander Soutschek and other researchers to get to the bottom of the question of whether and how this difference manifests itself in the brain. The scientists hypothesized that the neural reward system is more reactive in women than in men to prosocial behavior such as making charitable donations; prosocial behavior situations trigger an increase in the release of the neurotransmitter dopamine. Generosity thus generally produces a more rewarding effect in female brains than in male brains. Administering a dopamine receptor antagonist accordingly causes generosity to decrease in women, but not in men. Along similar lines, in another experiment, administering testosterone caused men to behave more selfishly, though mainly toward people not close to them.

However, drawing a conclusion from this that women simply are innately generous clearly comes up short, says Tobler. From an early age, girls often are given much more positive reinforcement than boys to behave altruistically and show consideration for others. Generosity is a behavior for which they get rewarded, and dopamine plays a crucial role in reinforcing and validating certain actions. Men, by the same token, are not simply egoists, Tobler says. There are very different kinds of prosocial behavior, he explains. "Men, for example, are more prone than women to put themselves in danger for others."

If generosity is so easy to manipulate pharmacologically, couldn't we administer a drug to humanity to make us all more munificent? Tobler smiles: "Acting in self-interest isn’t exclusively bad, of course." He cites from the literature the case of a man whose generosity turned limitless after he suffered a stroke: "To his wife's sorrow, in no time at all he had given away all of their belongings."

What generosity triggers in the brain

When we engage in an act of generosity, there is a burst of neural activity particularly in the temporoparietal junction of the brain. This area of the brain is responsible for, among other things, enabling us to mentally adopt the perspective of others and to abstract from our own point of view.

The temporoparietal junction communicates more intensively with the striatum in the brains of people who are more generous than in those who tend toward stinginess. The striatum, or corpus striatum, is part of the neural reward system and plays a crucial role in the experience of pleasure. The more intensive the connectivity between the temporoparietal junction and the striatum, the more generous we are and the happier we are with our altruistic decisions.