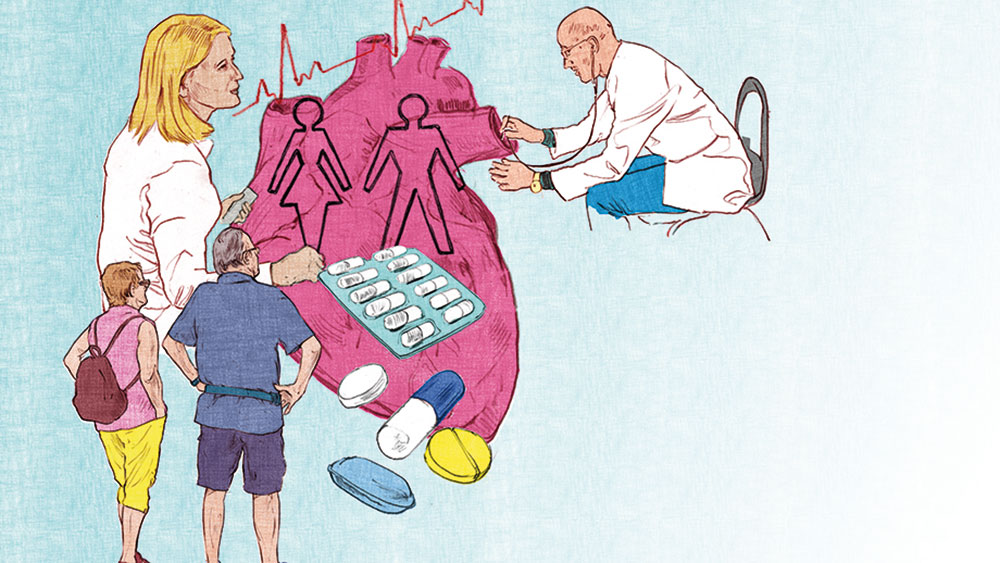 Illustration Gender Medizin
To compensate for its smaller volume, the female heart pumps at a higher rate – which brings women no benefit, according to recent data. (Image: Christoph Fischer)

A coronavirus infection affects different people in different ways. The disparity is particularly evident between men and women.  “When I saw the initial infection and death numbers, it was clear to me that we had to take action,” says cardiologist Catherine Gebhard, a specialist in gender medicine.

In Switzerland, as across the world, the number of men who die from Covid-19 is around 60 percent higher than women. In some nations, the number rises to three quarters. Men are more likely to be hospitalized, occupy more beds in the intensive care unit, and need more intensive and longer treatment. “The gender differences in the progression of the disease are significant,” says Gebhard. It is therefore important for doctors to discover the reasons for these disparities, since the best way of preventing and treating the disease depends on knowing where the differences come from.

To come to an understanding of the causes as quickly as possible, the cardiologist and her colleagues developed a study on the influence of sex and gender on the progression of Covid-19. The study was financed by the Swiss National Science Foundation as part of a special call for projects focused on coronavirus. “We assume that it is the impact of gender hormones on particular cell molecules and the differing immune responses between women and men that are chiefly responsible,” says Gebhard. These assumptions are based on well-founded hypotheses. For example, it is known that the female hormone estrogen affects molecules on the surface of the cells that the coronavirus needs to penetrate. The subject here is the membrane protein, ACE2, which can be found on the outer cell layers of the lung tissue and blood vessels that Sars-Cov-2 attacks.

Earlier studies have shown that the heart and kidney tissue in men is more densely covered with ACE2 than that of women. And initial evidence indicates that female and male sex hormones may have opposite effects on this protein. In her research, Gebhard examines the influence of estrogen on these receptor densities.

In the case of another membrane molecule, named Tmprss2, the male sexual hormone, testosterone, appears to play a role in influencing the receptors. This is indicated by preliminary successes from anti-testosterone treatments for Covid-19 conducted in Italy. Together, the two proteins form part of a larger and extremely complicated network of hormones and enzymes that regulate the volume of blood and water in the body. Investigations are twofold; some are carried out in labs using animal studies, others in clinics on patients. The University Hospital Zurich (USZ) as well as university clinics in Basel, Bern and Berlin are involved in the work. It is hoped, the researcher says, that initial results will be ready by the end of the year. The same goes for outcomes on the immune system from studies looking at gender-specific responses to inflammatory reactions.

For Catherine Gebhard, the pandemic is a textbook example of the still little-known discipline of gender medicine. No specialist title exists here in Switzerland – in contrast to Austria, for example. Originating from Bad Säckingen am Rhein, the 42-year old doctor is a pioneer in the field, and in 2016 was appointed to the first professorship for gender medicine in Switzerland at UZH.

The turning point for her scientific career was a discovery by her former boss, head of echocardiography at the University Hospital Zurich. Here, where ultrasound equipment is used to visualize and measure the ventricles and valves of the heart, her mentor noticed that the hearts of older women beat more strongly than those of men of the same age. Gebhard then went on to prove in her own study that the female heart contracts more strongly and pumps more blood into the body’s system. “I haven’t been able to let the subject go ever since,” she says.

It has now been proven that women’s hearts age differently to those of men. “The female heart’s pumping function changes with age because women’s hearts grow smaller after the menopause, which is not the case with men,” says the cardiologist. To compensate for its smaller volume, the female heart pumps at a higher rate – which brings women no benefit, according to recent data. In fact, it raises female mortality levels – even though women contract diseases from constricted and occluded coronary arteries on average 10 years later than men. Before menopause, women are protected by estrogen, but after menopause, this protection wears away causing the volume of deposits in the blood vessels to grow, and with it the risk of a heart attack or stroke. The fact that women experience heart attacks differently to men is still far too little known. “Heart attacks are often not recognized quickly enough because symptoms differ,” says Gebhard. Instead of chest pain radiating into the left arm and lower jaw, women often have more inconspicuous complaints, such as abdominal and back pain or nausea. As a result, they go to the doctor later, which can be fatal. As far as prevention is concerned, women are less likely to be examined for a narrowing of the coronary arteries. And women are generally underrepresented in clinical cardiological studies. All this contributes to the fact that more women die of cardiovascular diseases in Europe than men.

Medicine, especially cardiology, is dominated by men. This goes some way to explaining the tunnel vision tendency. But gender medicine is more than simply the biological differences between the sexes. “Gender medicine looks not only at biological factors but also at cultural and social aspects,” says Gebhard. In the case of heart disease, for example, studies have shown that women suffer greater mental stress after a heart attack than men. They have more concerns and face tougher challenges with their double and multiple responsibilities at work and in the family. This has been demonstrated by studies on women with heart disease that examine the activity of the brain’s fear center, the area known as the amygdala, Gebhard explains.

These social reactions overshadow the biological factors that are supposed to protect women. “The socio-cultural gender can have an opposite effect from the biological gender,” says Gebhard. This can also be observed with Covid-19: After lockdown, more women were infected than men. The assumption is that they were more exposed to coronavirus at their workplace and in caring for family and relatives. In order to investigate these socio-cultural influences, certain doctors are already working with a “gender score” that builds these aspects into the treatment. Canada and Germany are leading the way in this respect.

Although gender medicine is enjoying greater understanding in Switzerland, research findings – especially in clinical medicine – are still too rarely applied, Gebhard regrets. And she continues to hear the accusation that gender medicine is biased towards women even though, with men affected more acutely, Covid-19 proves the exact opposite. This has led one colleague or another to comment: “At last you’re doing something for men.”

In reaction, the cardiologist can only smile. It has now been found that anorexia, for example, is not a typical women’s disease, as so often labelled. Men suffer from anorexia too, but the treatments are designed for female patients. Another example is osteoporosis – said to mainly afflict women after menopause. As a result, it is seriously underdiagnosed in men and is one of the most neglected disease patterns in Europe. Which all goes to prove that gender medicine is of benefit to men and women alike.