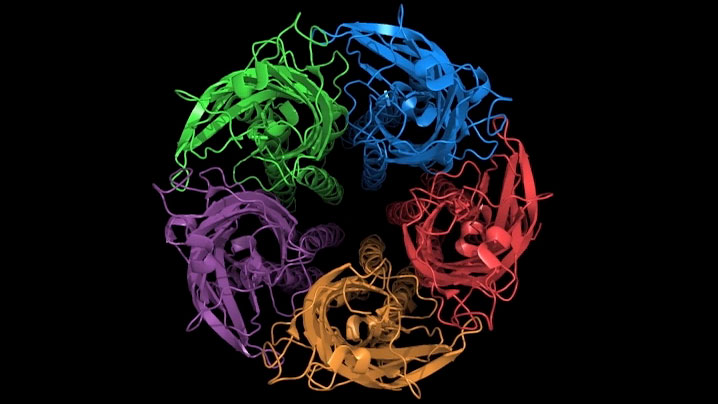 Our bodies function through the interaction of countless proteins. Among other things they catalyze chemical reactions, transmit messages from cell to cell, and make sure our immune system works. It is their three-dimensional structure that makes them able to perform these functions: It allows them to dock onto other molecules, bring reaction partners together, and activate or deactivate substances – so that everything in the body works exactly as it should.

The quest for structure

Being able to observe the three-dimensional structure of proteins is therefore essential for disease research and drug development. That is the task of structural biology. “Nowadays virtually all drugs are developed with the help of structural biology,” says Andreas Plückthun, professor of biochemistry at UZH. This is because in order to understand and optimize the way in which specific active agents work, it is necessary to know how the agent and the target protein fit together.

Structural biologists use various technologies to do this, and in recent years have made enormous progress. One of the most precise methods is protein crystallography: The process uses X-rays to reconstruct the molecular architecture of proteins and their ligands exactly, down to the individual atoms.

The structure is calculated based on the diffraction of the X-rays. The disadvantage of this process is, however, that the proteins have to be first converted into crystal form, since in a crystal, millions of individual protein molecules are oriented in a lattice. This is the only way to combine the signals of the individual molecules into a collective signal that is strong enough to be measured. 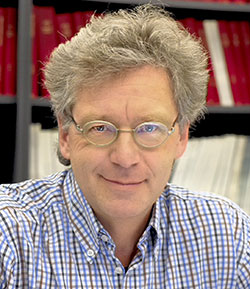 Andreas Plückthun, co-organizer of the symposium that will bring together leading structural biologists.

But getting the proteins into a crystal form is difficult: It often takes years to discover how to produce crystals from a particular protein. Especially for membrane proteins, which are especially important in medicine but tricky to handle, the generation of crystals has been problematic for a long time. That has now changed, thanks to developments in protein engineering, among other things.

Researchers are now able to modify the target proteins to make them more stable and thus easier to crystallize. “That gave a massive boost to research in the field,” says Plückthun, who is himself a specialist in protein engineering. “For example it became possible to analyze the structure of G protein-coupled receptors” (GPCRs). The GCPR family includes more than 800 receptors in the cell membrane that control many physiological processes and are therefore the target for many medicines. For example, they play a key role in fighting infections, in the action of hormones, and in the division and differentiation of cells.

Another method is cryo-electron microscopy (cryo-EM). The advantage of this method is that no crystal is needed, but merely a stable protein in a solution. But for a long time it was not possible to see the atomic details of protein structures using this method, but only their rough outline and shape. Recent technical developments have led to huge improvements in this method. Lately, structures were obtained from cryo-EM that are nearly as precise as those from protein crystallography. “We might be on the brink of a revolution with cryo-EM making the development of new drugs much easier in the future,” says Plückthun.

However, both technologies, protein crystallography and cryo-EM, only make it possible to see the static state of a protein. “To understand a process completely, we need to add the dynamics,” says Plückthun. Additional methods such as nuclear magnetic resonance spectroscopy, mass spectrometry and single molecule spectroscopy are also being used more and more often as part of structural biology investigations. These processes enable the movements in the interactions between protein and active agent to be observed. Coupled with structural information, the picture becomes more complete: The researchers can see how the protein and the agent react with and adapt to one another.

“It is vital to the field that the methods are brought together,” says Plückthun. He is therefore co-organizer of a symposium at Irchel Campus which will bring together leading structural biologists – with the aim of developing new and improved medicines in the future.

The symposium “Trends in Structural Biology” being held from 19 to 21 August at UZH’s Irchel Campus will bring together leading structural biologists from all over the world to discuss the most recent developments in the field.

For example, Dame Carol Robinson, president of the British Royal Society of Chemistry, will present the latest progress in mass spectrometry of proteins. US researcher Karen Glass will explain how she investigates epigenetic modifications using structural biology. And Werner Kühlbrandt, director of the Max Planck Institute of Biophysics, will demonstrate how he wants to do something that was hitherto impossible: Examine the structure of proteins directly in cells.