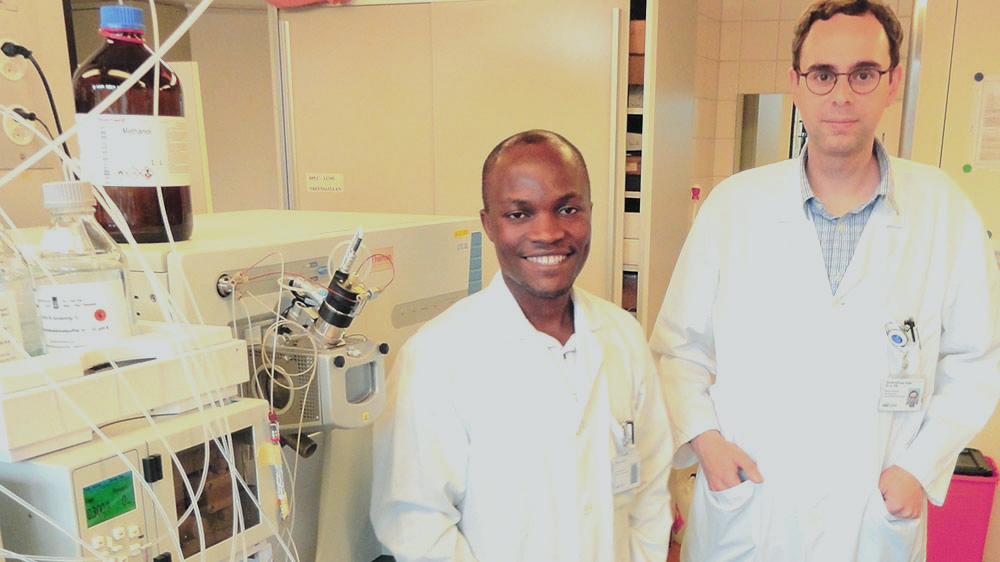 Tangible research partnership: Allan Buzibye and Daniel Müller in the Zurich laboratory – the mass spectrometer on the left in the picture. (Image: Ruedi Küng)

As a boy, Allan Buzibye wanted to become an astronaut. At school he excelled in mathematics and physics and gave up his boyhood dream to pursue a career as an engineer. But the ambitious young man from the town of Jinja, where Lake Victoria flows into the Nile, narrowly missed the required grades at high school. Instead, he chose to study to become a biomedical lab technician. Thanks to his conscientious and meticulous approach to researching medicinal plants in his home country of Uganda, he soon gained a position at the John Hopkins University Core Laboratory, and then joined the Infectious Diseases Institute (IDI) in the capital Kampala. Both scientific institutions, which are committed to combatting the HIV/AIDS pandemic in Uganda, are affiliated with the Makerere University, which in turn has been working together with the University of Zurich for more than a decade.

And so it came that Allan Buzibye, having completed further training in the Netherlands, returned to the IDI and began working on the SOUTH study jointly carried out by the IDI and UZH. This study investigated the relationship between different concentrations of anti-tuberculosis drugs and the results of tuberculosis treatment in Ugandan adults infected with both tuberculosis (TB) and HIV. As a lab technician, Allan Buzibye was tasked with carrying out the most important laboratory measurements.

Impaired hearing and kidney damage as side effects

The study has since been expanded. In both Uganda and Switzerland, AIDS patients suffering from TB are normally treated with four drugs. “These so-called first-line drugs are very effective, relatively inexpensive and comparatively well-tolerated,” says Allan Buzibye. “However, if AIDS patients are infected with TB bacteria that are resistant to one or more drugs, other antibiotics have to be administered. In Uganda, these are mainly aminoglycosides. If these are administered in too high a concentration, there can be serious consequences for the patients’ health. It can quickly cause irreparable damage to their hearing or even hearing loss. It can also adversely affect the kidneys”. If TB therapy is to be successful and safe, the ability to determine the concentration of drugs in patients’ blood quickly, regularly and reliably is essential.

The SOUTH study used high-performance liquid chromatography with ultraviolet detection (HPLC-UV), a method that makes it possible to measure, among other things, the concentration of basic drugs against TB and HIV. Measuring the concentration of aminoglycosides in the blood, however, requires something more advanced – ultra-high precision measurements, so to speak. This is achieved by coupling high-performance liquid chromatography to a mass spectrometer (LC-MS). For Allan Buzibye to be able to use this complex machine, referred to as “mass spec” by those familiar with it, initially for research at the IDI and later also for clinical patient care in Kampala, he first had to learn the necessary skills – much in the spirit of the partnership.

This is the area where Daniel Müller, scientific laboratory director at the Institute of Clinical Chemistry at the UniversityHospital Zurich (USZ), was able to provide support for Allan Buzibye. The LC-MS is a state-of-the-art device with a relatively expensive technology that users have to be able to adjust themselves. The machine was made available to the IDI by the UZH. “Without his excellent previous training and experience, however, Allan would not have been able to get this far in the relatively short time of one year, on top of his work,” says Daniel Müller. The training included working at Daniel Müller's side in the USZ laboratory for several weeks, where a whole series of LC-MS machines are in daily use. In turn, Daniel Müller also visited Allan Buzibye at the IDI.

“Setting up the LC-MS was a challenge,” admits Allan Buzibye, “but the machine has become quite friendly in the meantime”. His day-to-day work with the machine makes him forget about the many difficulties and obstacles he had to overcome. Daniel Müller reveals some of the challenges, for example obtaining a reliable supply of high-purity nitrogen in East Africa, which the LC-MS needs. Or the fact that the nearest service technician lives 2,800 kilometers away in South Africa. This is why Allan Buzibye had to learn so much about the machine’s technology: He has to be able to service the machine himself. Or that the machine in the IDI lab has to be protected against the ubiquitous red dust from the laterite soil in the Ugandan capital, which could render the machine useless.

The LC-MS at the IDI is still only used for research. However, in accordance with the idea behind the research partnership, there are plans to use it for the benefit of patients in the clinic as soon as possible. Daniel Müller and Allan Buzibye have become close research partners over the many years of their cooperation. What’s more, adds Daniel Müller, the two of them have also become friends and he is looking forward to Allan’s next visit. He will take part in the research partnership’s Dialogue Days 2019 in Zurich. The three-day conference, which takes place from 9 to 11 September, brings together human and veterinary researchers and experts, interested parties from a wide range of institutions and organizations, as well as policy-makers to discuss the upcoming challenges of global health.

The conference will address challenges to global health, including: non-communicable diseases, communicable animal and human diseases, climate change and migration. Tuesday is open to the public and offers a special discussion on migration.

Registrations can be made until 2.9.