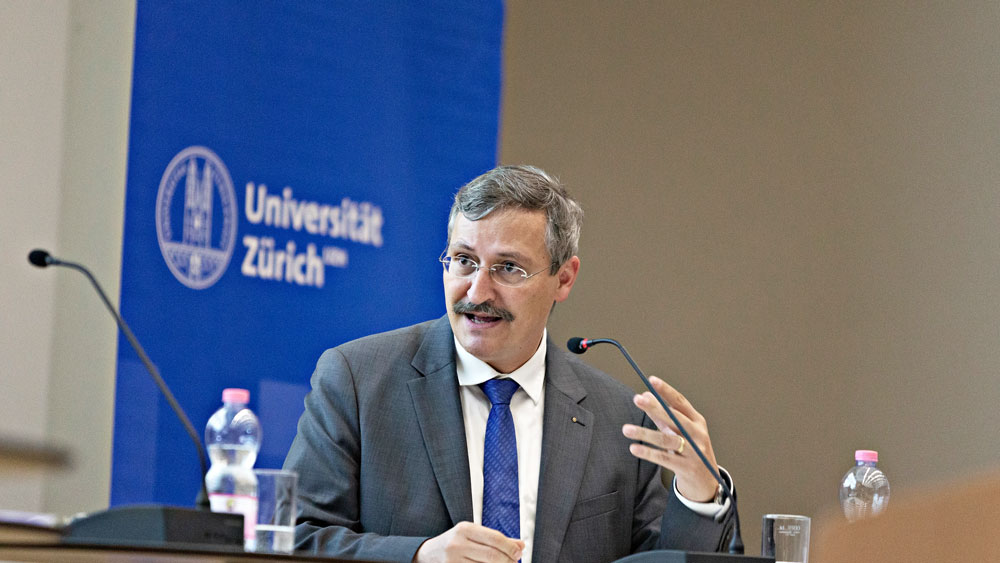 Moderator Martin Amrein opened the event, which drew several hundred visitors to UZH’s large auditorium above the Paleontological Museum, with a surprising comparison: Much like the dinosaurs that dominated the animal kingdom until 65 million years ago, big academic publishing houses like Wiley, Elsevier and Springer Nature dominate the publishing industry today. They have used this dominance to demand ever-increasing fees from university libraries, raking in inappropriately high profits in the process. However, the open access model has come along and threatened their lucrative business model – looming much like the meteorite that once drove the dinosaurs to extinction. Amrein posed the following questions: Would a quick transition to the open access model – as demanded by research funding institutions – liberate us from the market dominance of publishing houses? And would it do so without creating new problems, for instance for small book publishers?

In principle, yes – this was the conclusion reached at the event, which was entitled “Open access: Should knowledge be free?” and jointly organized by UZH and NZZ. No one expressed fundamental criticism against the principle of open access. Even Anne Buechi, co-founder and manager of the book publisher Versus, expressed her openness to the move towards open access, which she sees as “not a threat.” UZH President Michael Hengartner explained the necessity of open access in light of the technical possibilities that have been opened up by the internet. He emphasized that the findings of publicly funded research must, on principle, be freely available to everyone. “UZH committed to open access early on,” said Hengartner. The University now makes around 40 percent of publications freely available – the most in Switzerland. Rafael Ball, director of the ETH library, also criticized the policies of the big publishing houses. “The prices rose too dramatically, and libraries could no longer keep up,” he explained. Ball definitely sees the internet and open access as alternatives to traditional publishers, albeit with limits. Sleep researcher Christian Cajochen concluded with another clear vote for open access. The University of Basel professor published his first open access paper in 1999 and founded the open access journal “Clocks and Sleep” in 2018. 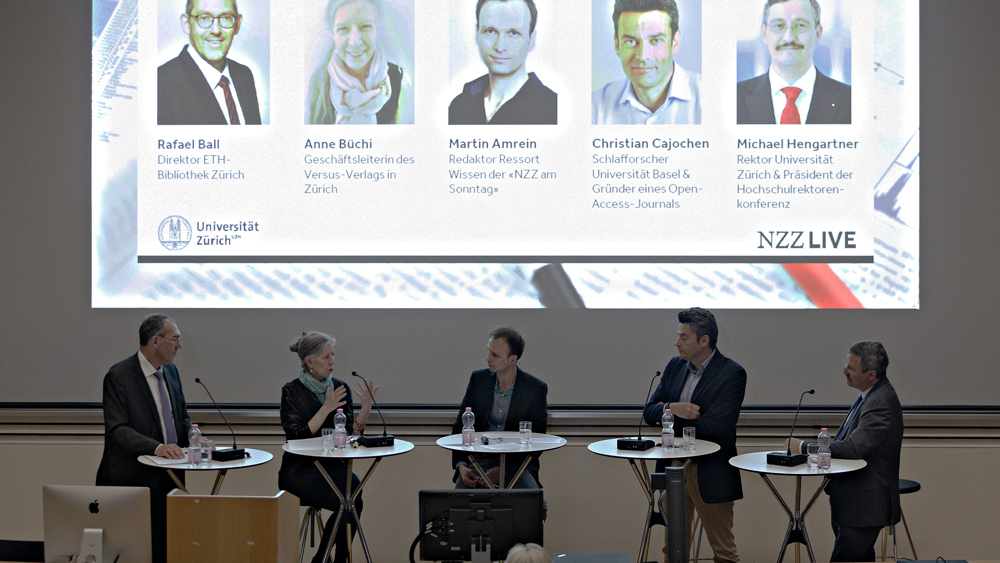 While the panelists were in basic agreement on the merits of open access, there was disagreement when it came to the question of how quickly academic publishing should be transformed. “We need to hit the brakes a bit, as a lot of publishers cannot fulfill the requirements,” said Ball. Cajochen, on the other hand, supports the Swiss National Science Foundation’s (SNSF) call for a swifter transformation.

A bit of background on this nuanced debate: Three research funding institutions have launched initiatives that support different approaches for switching to the open access model. The most radical is Plan S by Coalition S, launched in the fall of 2018 by a consortium of European research funding institutions. According to Amrein, the “Speed” plan calls for unrestricted online access to new academic publications starting in 2020. The SNSF has also committed to the year 2020 and will require grantees from then on to make their research findings available in an open access publication or database. The SNSF plan differs from Plan S in that it allows researchers to place their findings in a repository with an embargo period of up to six months.

This means that researchers may, for instance, first publish an article in a closed access journal, but it must be released via open access within a certain period. However, the Swiss National Science Foundation has expressed a clear preference for the “gold road” method: immediate publication in an open access journal. These online journals do not have subscription fees, so they usually require authors to pay a fee for the journal’s production and quality management.

A third plan has been put forward by the Rectors’ Conference of the Swiss Universities (swissuniversities). Their approach foresees a move to open access by 2024. In his role as president of swissuniversities, Michael Hengartner is a proponent of this plan. He explained that a slower transition would give different institutions time to implement open access according to their needs. The UZH President added that the SNSF did not sign on to Plan S because of the plan’s strict requirements – which he sees as the right decision. Ball even expressed the view that Plan S is a grave mistake.

The lively discussion shined a light on just how complex and interconnected the topic of open access is. Christian Cajochen spoke in favor of the “platinum model” of open access publishing, in which journals are published directly by the research or funding institutions themselves. The University of Zurich, for instance, publishes several journals on its HOPE server. Several speakers emphasized the fact that publishing in new journals of this kind is only of interest to the research community when the journals become reputable enough to boost researchers’ careers. This kind of reputation building takes many years of work. Buechi made clear that there is a significant difference between the business model for academic books and academic journals. As a publisher, even she is working on a joint platform of all publishing houses – according to her, this would be the goal.

With regard to libraries, there are hopes that the ongoing negotiations between swissuniversities and the three big publishers will ease the situation. The goal is to find a compensation model that includes open access for all institutions and puts the brakes on ballooning costs. Hengartner did not reveal details, stating only, “We hope for a solution.” If the deal becomes reality, the apocalyptic scenario suggested by moderator Martin Amrein at the beginning of the event would be off the table.