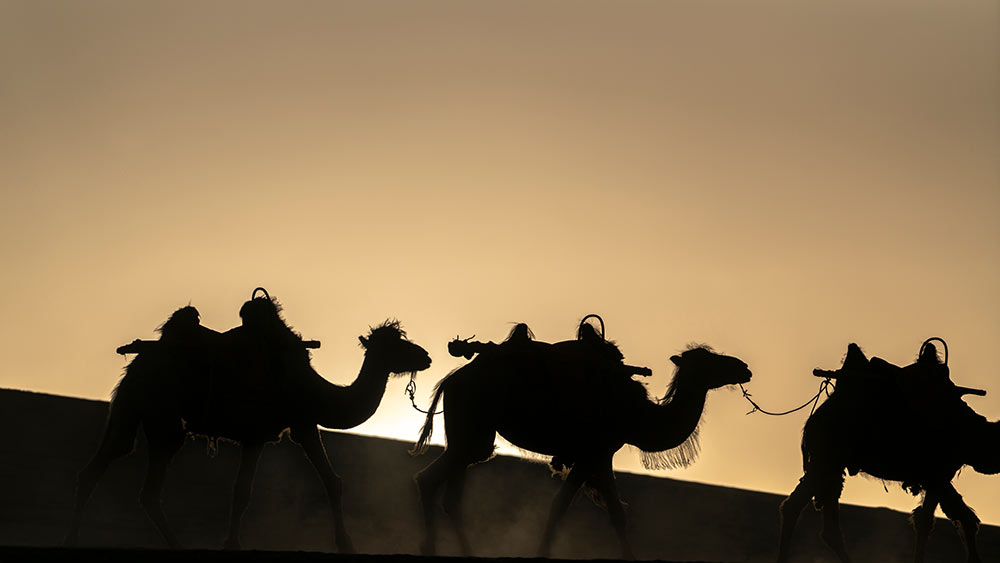 While the name “new Silk Road” evokes romantic images of long caravans traversing Eurasian plains, the modern-day “Belt and Road Initiative” is a billion-dollar Chinese development strategy that is not without criticism. (Image: iStock, yipengge)

When the Chinese President Xi Jinping announced the launch of the Belt and Road Initiative in 2013, he spoke of a new Silk Road that, following the model of the historic Silk Road trade routes, would make trade between China and other countries easier, thus stimulating economic growth.

While the name Silk Road evokes romantic images of long caravans traversing Eurasian plains, its modern-day incarnation is called the Belt and Road Initiative (BRI) and refers to land and ocean routes between China and Europe. These include economic corridors along land routes (“Belt”) from Beijing to Western Europe, mainly in Central Asian and Eastern European countries, and maritime corridors (“Road”), mainly in South East Asian and East African countries.

The Geographic Ethnographic Society Zurich (GEGZ) is now holding a series of lectures on the topic. The various aspects of the Chinese development model will be explored in five individual events. One of the speakers is Patrick Ziltener, adjunct professor of sociology at UZH. His academic research focuses on the processes of regional integration in East Asia, in particular the new Silk Road. In his lecture, he will discuss what the BRI could mean for Switzerland and Europe.

According to Ziltener, there are many possibilities for Switzerland to take part in the BRI, as China is also interested in cooperating with the Swiss. “As Switzerland is not involved in power politics, it is not seen as a threat to China. China would above all like to learn from Switzerland’s experience with international business law.” For instance, Switzerland could help China to make the BRI more transparent.

Opinions about how closely Switzerland should cooperate with China are divided. Ziltener’s attitude is one of pragmatism. “Switzerland has no negotiating power with China. But we do have the opportunity to contribute something positive to the BRI’s development. It would be irresponsible to turn away from the chance of dialogue.”

A criticism often heard, especially from the USA, is that Chinese mega-projects lead developing countries into debt. “There is no empirical basis for this allegation,” says Ziltener. “There are cases, it is true, such as the Hambantota port in Sri Lanka, where projects have failed. But it is not in China’s interest to get other countries into debt. At the end of the day, the projects also have to be economically viable for them.”

Nevertheless, the People’s Republic of China does want to position itself as a world power, so geopolitical motivation for the investments cannot be excluded. “China has begun to arrange the world to suit its purposes, which of course has geo-strategic significance as well economic consequences,” says Ziltener. It is increasingly attempting to create strategic links to the West. “China is rebuilding everything – from the UN to the ports in South East Asia. Chinese concepts and ways of doing things are being introduced everywhere.”

Ziltener also sees this strategic positioning of China as a consequence of the USA and its allies in the Pacific Rim getting closer and closer. For example, China’s neighbors South Korea and Japan host US military bases, making China’s access to the Pacific more difficult. In the South China Sea, territorial conflict with the Philippines has damaged the relationship with China. This means, explains Ziltener, that the Silk Road is a new option for China to achieve its geopolitical aims and to maintain its transport routes.

For Patrick Ziltener, the initiative needs to be seen in the right context. “We have a Westernized preconception of how organizations should be structured and operate, with statutes, legal processes, etc.” In China, however, such things are seen quite differently. The BRI is viewed as a project that is slowly coming into being. Processes may overlap or exist alongside one another. Imagining the BRI as a kind of learning organism makes it easier to understand the project.

“China is not about to launch an ultimate battle for hegemony,” says Ziltener. “The Chinese do not want military confrontation. Rather, with the BRI they want to change their surroundings to get themselves into a better strategic position. At the end of the day, they also want to be part of the global system.”

The New Silk Road: Effects of the Chinese Development Model

The lecture series by the Geographic Ethnographic Society Zurich (GEGZ) on the new Silk Road starts in October. Lectures are on Wednesdays at 6:15pm in lecture hall HG D 7.2 of the ETH Zurich main building (lectures held in German).