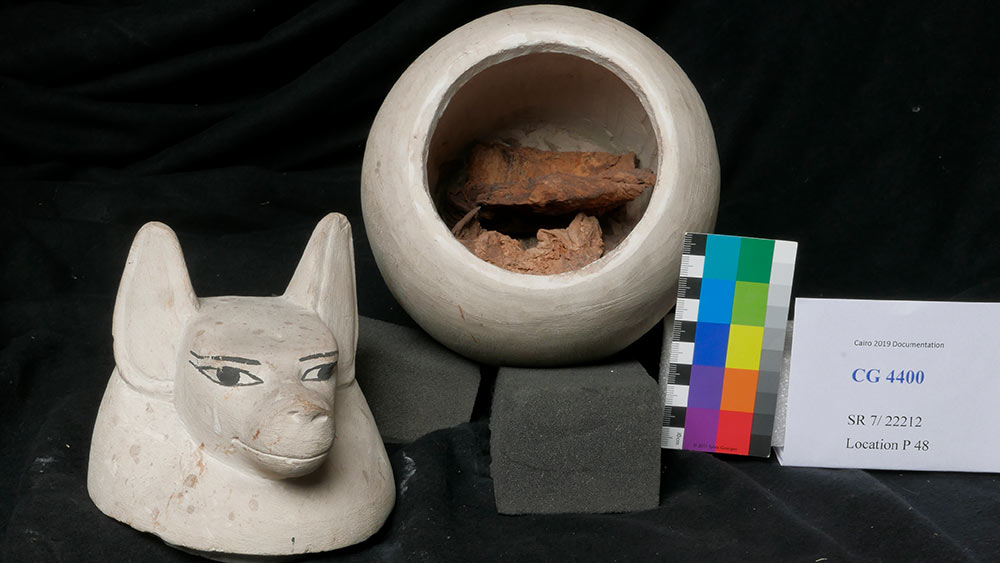 Several dozen canopic jars are stored in the basement of the Egyptian Museum at Tahrir Square in Cairo. Crafted from stone, ceramic, clay or wood, these unusual vases are home to internal organs that were removed during the mummification process. By removing the liver, lungs, stomach and intestines from a dead body, the ancient Egyptians were able to better prevent it from decomposing. At the same time, they also wanted to preserve the embalmed entrails for the afterlife – just like the mummified corpse itself.

For many years, canopic jars were only considered relevant from an art history perspective. Frank Rühli and his team are among the first researchers to conduct a scientific analysis of the jars’ contents. Rühli conducted his work under the banner of the Canopic Jar Project, funded by the Swiss National Science Foundation. So far, the mummy researcher has been able to analyze around 200 canopic jars from Ancient Egypt collections of museums around the world, covering a period from the Old Kingdom to the Late Period.

Important piece of the puzzle

This summer, Rühli was granted access to 20 canopic jars from the collection in Cairo. He had waited around three years to receive permission to conduct his groundbreaking interdisciplinary research on the jars and their contents. According to Rühli, local researchers are usually given precedence. The vessels from the Egyptian Museum are a valuable piece of the puzzle for his project. Some of them date back to the Middle Kingdom (2137–1781 BC), an era that had largely been missing from Rühli’s research.

His team applied the following approach for analyzing each vessel: First, Egyptologist Michael Habicht interpreted the inscription on the jar, which was usually a description of the contents that provided clues as to when the mummification took place. Patrick Eppenberger, a paleopathology specialist with experience in radiology, took x-rays of the vessel. This allowed him to create a three-dimensional visualization of the organs before opening the jar. Then the researchers also took samples of the viscera for histological and genetic analyses to be performed at a later stage.

The working conditions at the Egyptian Museum in Cairo sometimes demanded great patience. Every time a researcher entered a room with the x-ray machine, they had to receive a stamp and signature granting permission – a daily ordeal. The team toiled in temperatures that soared up to 45 degrees Celsius – sometimes without daylight – and had to deal with an unstable power supply. The fluctuating grid frequency also damaged the x-ray tube on the researchers’ portable computer tomography device. Getting the device into the country in the first place had required extraordinary efforts on the part of Rühli: Two days at customs and the support of the Swiss embassy in Cairo.

Investigating the roughly 200 jars has yielded the following findings thus far: Many of the jars are empty or do not contain the organs indicated by the inscription or the decorative lid. Lids featuring a human head indicate that the jar was used to store the liver. Baboon-headed lids were designated for the lungs, jackal-headed lids guarded over the intestine, and falcon-headed lids were intended for jars containing the stomach. Researchers also found that some of the jars contain only fragments of organs. “This contradicts the previously undisputed theory that canopic jars contained organs in their entirety,” says Rühli.

The research team worked together with the Institute of Forensic Medicine at UZH to conduct chemical and toxicological analyses of the viscera. This yielded another exciting finding: The entrails had been preserved using a different mummification method than the rest of the body. The team discovered substances in the internal organs that had never been found in mummies, such as salicylic acid, which is responsible for the anti-inflammatory action of aspirin. Does this mean that ancient Egyptians were already using this substance medicinally? It is certainly possible, but Rühli concedes that interpretations should be made with caution, as many of the approximately 5,000 substances identified in the jars found their way there through contamination by the environment. “We still don’t know enough about which substances were used for which purposes,” explains Rühli. “Mummification remains a mystery to this day.”

Rühli and his team broke new ground by conducting DNA analyses of the mummified entrails. Typically, teeth or bone fragments from the base of the skull are used to perform genetic analysis of human remains, as these contain well-preserved macromolecules. Rühli has now demonstrated that it is also possible to extract DNA from visceral tissues. He is currently working together with paleogeneticist Verena Schünemann to analyze the genome sequencing results.

Rühli is hoping that his research on canopic jars can bring about new insights into the evolution of diseases that impact us today. Analyzing these ancient entrails from an evolutionary medicine perspective has proven to be a key addition to his previous mummy research. Certain diseases only develop once they have access to the internal organs. Rühli explains: “To find out if people in ancient times also suffered from say, hepatitis, it’s very helpful to have tissue and DNA samples from their livers.”

He wants to extend his research on mummies and canopic jars and is planning a bigger project that will investigate the health and living conditions of people in the entire Nile Valley during antiquity. Rühli is also working to support knowledge transfer and exchange with local researchers. He is taking part in a UNESCO project in Egypt to train curators, restorers, archeology students and museum specialists on how to handle mummies and canopic jars. “For me it’s important to be able to give something back,” he says.

The goal of the Canopic Jar Project is to conduct interdisciplinary research on a larger collection of human mummies and internal organs (lungs, liver, stomach and intestines) from Ancient Egypt. The samples, which come from the Ancient Egypt collections of around a dozen international museums, are analyzed from both an Egyptological and a medical perspective.
This interdisciplinary project builds on the extensive work done by UZH’s Swiss Mummy Project (www.swissmummyproject.uzh.ch).

Financial support for the Canopic Jar Project was provided by the Swiss National Science Foundation, the Mäxi Stiftung, the Cogito Foundation and the Athenaeum Stiftung.