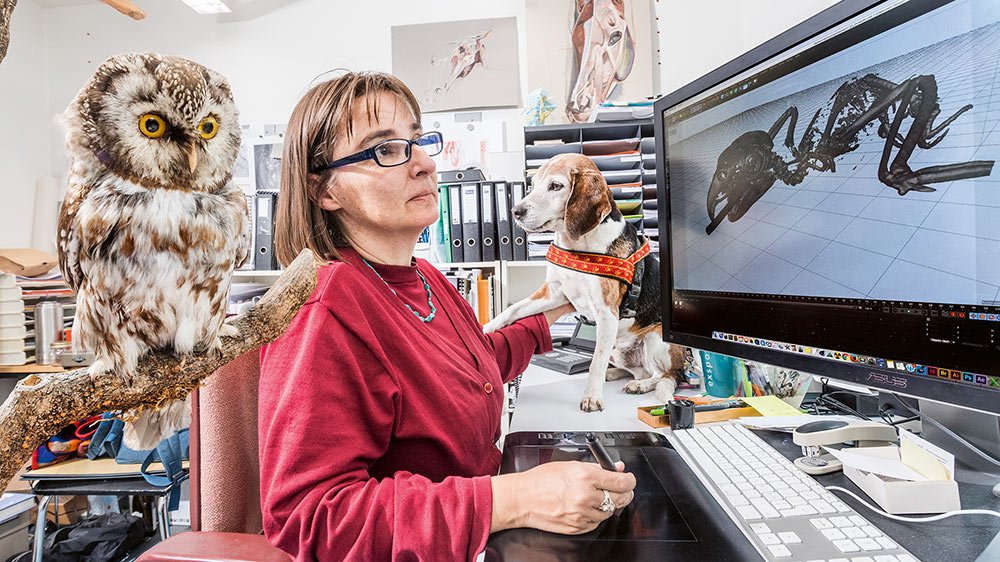 The office is packed with folders, books, CDs and ring binders, with various bones, animal skulls and a horse skeleton modelling kit lining the shelves. Anatomical drawings adorn the walls, and two dogs lie on the floor, snoozing. Here, in of the Veterinary Teaching Hospital’s annexes, is the workplace of Jeanne Peter. The scientific illustrator prepares clear and vivid depictions of scientific subjects and research. And she has done so for the past 31 years.

Jeanne Peter came across the job ad from the Institute of Veterinary Anatomy at the Veterinary Teaching Hospital shortly after graduating from what was then the Zürcher Kunstgewerbeschule. “During the job interview, my future boss showed me the cellar,” she says. “That’s where the anatomical specimens were kept, preserved in formalin.”  The professor laid out a few of specimens in front of the young illustrator to see whether she was squeamish about the smell. Unlike her fellow applicants, she passed the test and got the job.

Peter stayed loyal to the Institute of Veterinary Anatomy for 22 years. Her drawings were used for teaching, publications and textbooks. Then she moved to the Department of Scientific Communication and Outreach. She has since gone on to head up the team, which includes photographers, graphic designers and video specialists. And yet, to this day Peter spends most of her time illustrating: She can draw everything, from anatomical details and state-of-the-art devices to the steps involved in a new surgical procedure.

Jeanne Peter’s work keeps her busy at all times, and yet she still never refuses a job.  “Sometimes people might have to be bit patient,” she says with a wry smile. There is still a great need for scientific illustration today and they are used to accompany texts, in teaching and also in e-learning environments. Peter explains the advantage that illustrations have over photographs: “Drawings allow you to highlight what’s important and omit whatever’s not.” A good drawing can thus sometimes replace several pages of explanatory text. 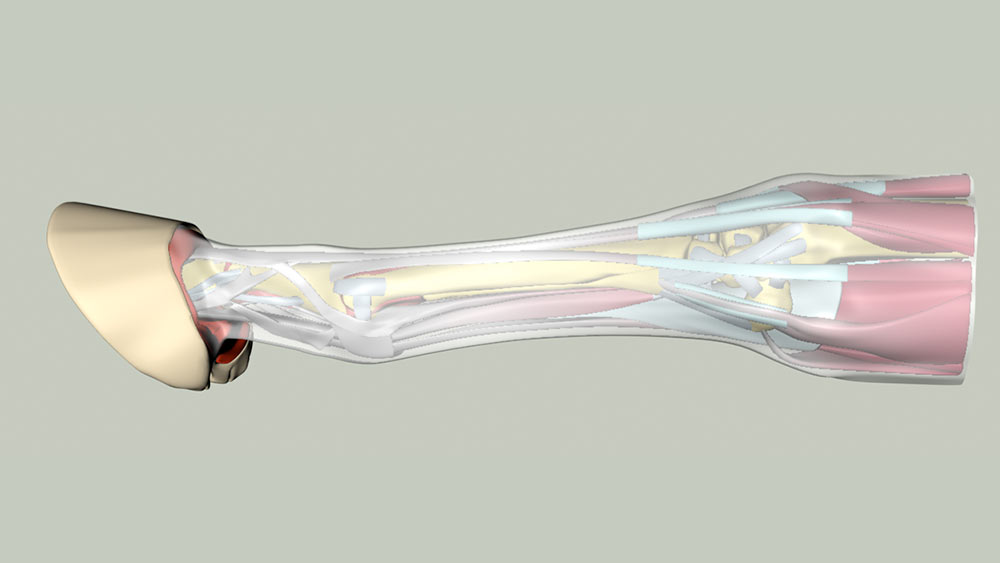 Besides doing drawings on her drawing tablet, Peter now also does visualizations. For example, she designs and then prints 3D objects that you can touch and look at from all angles. Around 10 years ago, she completed further training in the area of 3D animation and has since also been developing virtual objects in 3D – time permitting and where sensible. She has used this technique to illustrate, among other things, the effect that short snouts have on the breathing of dogs. She once also animated a horse leg, which could be rotated in all directions on the screen. The kicker was that users could also virtually remove and reinsert structures such as the skin, blood vessels and muscles.

One of the things Jeanne Peter loves about her work is that her illustrations and visualizations never stand alone, but are always connected to a scientific paper or a text. This provides her with a steady stream of insights into various subjects and research. “The first thing I do when I get a new assignment is ask a lot of questions,” says the illustrator. Besides the content, she also has to know about the goal, the message and the target group. She then develops and implements the educational and visual concept hand in hand with her clients. Her eyes light up when she talks about working together with researchers.

The passionate illustrator began drawing prolifically at a young age, for a very good reason: “You can’t get injured when you draw.” This was important, since Peter has a blood clotting disorder. Fortunately, she has always enjoyed being creative – and it was also obvious that she was talented. She passed the entrance exam for the preparatory course at the Kunstgewerbeschule at the first attempt. Ultimately it was an aquarelle of two jumping frogs that made her decide to focus on scientific illustration. The creator of the painting had been commissioned to draw the two amphibians for the advertising agency of Peter’s parents. And it was through this illustrator that Peter became aware of the specialized course in scientific illustration.

Peter’s curiosity and passion for all things visual also extend to her leisure time. She’s currently working on portraits of the last charcoal burners in the area of Romoos, who continue to practice the quaint trade to this very day. “I’ve wanted to draw portraits ever since I was a child. And now I’m finally doing it.” Another of Peter’s projects also has to with visualization: Peter heads up the tin figurine museum in Grünigen. This came about because she lives right next door to the museum. While she finds the figurines and their military context “a bit weird”, she still takes great pleasure in them. She is particularly fascinated by the complex historical context, which she enjoys conveying to visitors in guided tours of the museum. “I always enjoy learning new things,” she says, with a smile on her face.