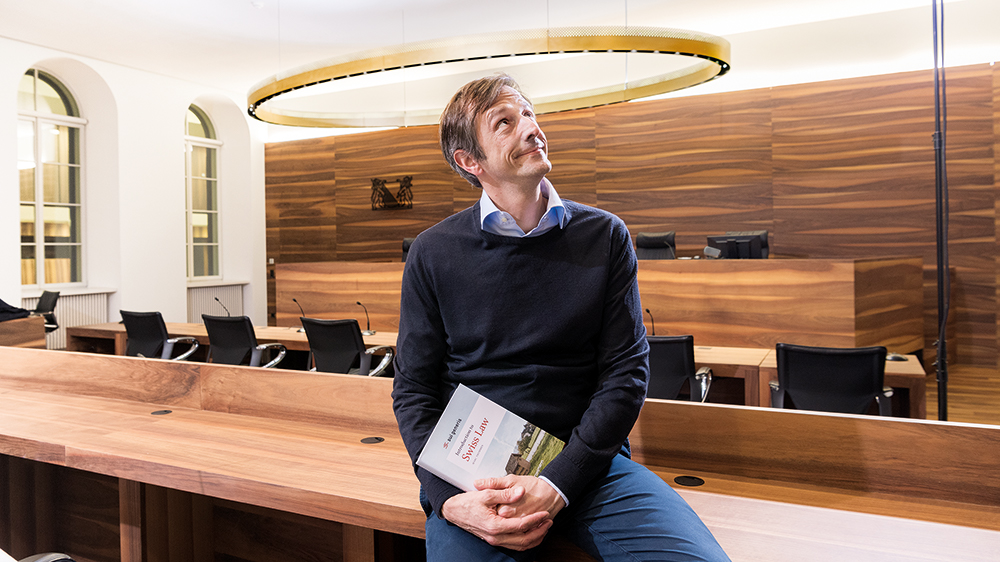 Specialist literature about law does not come cheap. Authoritative textbooks can often cost over 100 francs, with readers having to pay even greater amounts for specialist literature. Marc Thommen, professor of Swiss criminal law at the Faculty of Law of UZH, believes the current state of legal publishing is problematic. The reason is that publishing houses often publish specialist knowledge that comes from university scholars who are funded through taxpayer’s money. “This public good then has to be purchased by those who want to use it,” criticizes Thommen.

While he acknowledges the editorial work of the publishers, he also believes they get a disproportionately high share of the benefits of knowledge that is generated with public money. Thommen names the example of the project “Berner Kommentar zum Kommissions- und Frachtvertrag”, which was supported by the Swiss National Science Foundation with around 400,000 francs. Anyone interested in the findings of the project now has to pay lots of money to read about them in a specialist publication.

It’s situations like these that have led to the emergence of open access publishing in academia, a concept that is rapidly gaining traction. (See box below) It is based on the notion that publications of research financed with public funds should be freely accessible. As more and more journals embrace open access publishing, legal expert Marc Thommen has now for the first time applied this concept to a law textbook in Switzerland.

The textbook Introduction to Swiss Law has been available online for free since late last year and can be downloaded as a PDF. The thoughtfully designed book is the joint labor of 13 UZH experts and provides an overview of the Swiss legal system. Written in English, it is aimed at foreign students and expats wishing to learn about the Swiss legal system, from civil law and criminal law to corporate law as well as the principles of direct democracy.

Thommen and his co-authors published the book through their own publishing company “sui generis”, which also publishes an open access law journal on its website. The publishing house as well as the association were founded four years ago by Marc Thommen and Daniel Hürlimann, who now works as an assistant professor of information law at the University of St. Gallen.

The series of books published by “sui generis” make outstanding doctoral theses and textbooks accessible to the general public. Following Monika Simmler’s doctoral thesis on the stabilization of norms and accusations of guilt (Normstabilisierung und Schuldvorwurf), the Introduction to Swiss Law is the first textbook to be published by the company. It can be downloaded online or purchased as a hardcover or paperback book. The textbook is distributed by German publishing house Carl Grossmann.

“We simply want to make our publications available to everyone who’s interested,” says Thommen. Doctoral theses in particular are often distributed at prices that are prohibitive, which the legal scholar believes ought to change. With their open access publishing house, the founders of “sui generis” have managed to circumvent this barrier. In return, they have to assume responsibility for the publications’ quality. “It’s our job to ensure the quality of the published texts,” says Thommen.

This is why when it comes to doctoral theses, they only publish outstanding scholarly work. With journal articles, they use double-blind peer reviews, where neither the reviewers nor the authors know each other’s identity, to make sure that quality standards are met. Editorial publishing tasks are performed by two student employees, whom sui generis pays through third-party funds.

Gold or platinum
Sui generis is supported by the Main Library of the University of Zurich and other Swiss university libraries. The required online infrastructure is provided by the Main Library through the HOPE publishing platform. Besides sui generis, the server puts out further open access publications, such as Studies in Communication Sciences. The model used by sui generis is known as the platinum model of open access, in which academics and researchers publish their works through their own publishing houses funded by sponsors and patrons.

Other models include gold and green open access. In the gold model, scholars publish their original publications in a freely accessible journal, with some publishers demanding a fee, or article processing charges, from the authors in return. In the green model, in contrast, scholars republish their articles or books in open access repositories after an embargo period has elapsed. At UZH, this is done through the Zurich Open Repository and Archive (ZORA).

The platinum and gold options are the preferred solutions for proponents of open access publishing, since both ensure that publications are freely available right away. However, the platinum model requires a lot of work, since academic publishers must first build up and earn their reputation. “We’re still at the beginning,” says Marc Thommen. The legal scholar is convinced that the time and dedication he’s put into his fledgling publishing company will pay off and that the pioneering project will be a success. “Academic publishing is shifting, and open access can’t be stopped.”

This article has been published in printed form in the UZH Journal Nr.1/19.

Open access publishing is supported and promoted from all sides. In Europe, the Plan S initiative launched by a number of European funding organizations is the most ambitious plan to date. It requires state-funded research work to be published in open repositories or in journals that are available to all by 2020.

The Swiss National Science Foundation is pursuing a similar goal, requiring publications about projects funded by them to be freely accessible, also by 2020. With its National Open Access Strategy, swissuniversities has developed its own objectives for higher education institutions in Switzerland: The aim is to make all academic publications that have been publicly funded available for free by 2024, and they have also developed an action plan to implement this strategy. The focus next year will be on developing joint services and repositories and raising awareness for the issue and supporting researchers.

“The University of Zurich has a leading role when it comes to open access publishing in Switzerland,” says Wilfried Lochbühler, director of the Main Library of the University of Zurich. Around 40 percent of UZH’s publications are already freely accessible, compared to the Swiss average of roughly 30 percent. Most publications at UZH are published according to the green model (see main text) through the Zurich Open Repository and Archive (ZORA), while approx. 8 percent are made available for free in journals such as PloS One.

UZH researchers are already required to make their published work freely available in ZORA, unless there are legal reasons such as copyright regulations that prevent them from doing so. Last but not least, ongoing negotiations about free and open access with the three major publishers Springer Nature, Wiley and Elsevier are also key for Swiss higher education institutions. The negotiations are likely to be concluded by the end of 2019. (sts)