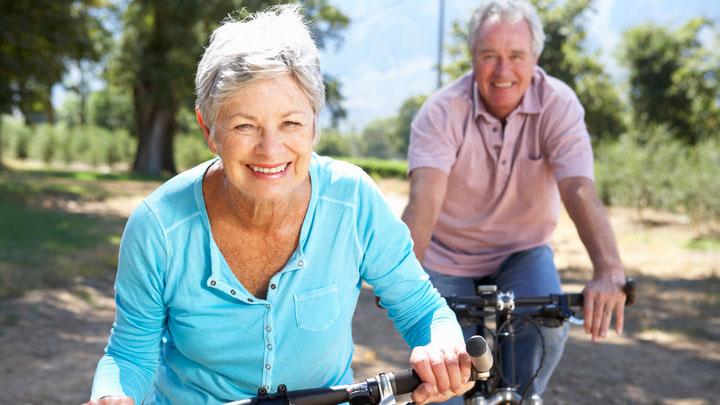 Applies to physical and mental fitness: Stay in motion and best of all in company. (Image: iStock, monkeybusinessimages)

A life of freedom, with no more commitments, after decades of work: Many people look forward to retirement, hoping to remain healthy in body, and especially, in mind for many years to come. But the question is whether it is even possible to have a healthy brain in old age. “Bear in mind that loss of brain mass is a normal part of aging,” says Martin Meyer, speaking at an event in the “Wissen-schaf(f)t Wissen” (Knowledge Begets Knowledge) series at the Zurich Center for Integrative Human Physiology. Senior researcher at the Chair of Neuropsychology at the University of Zurich, Martin Meyer is researching age-related changes to the brain.

He explains that it is mainly the outer layer, the cortex, that becomes thinner as we age. But the good news is that a reduction in brain mass does not necessarily equate to a decline in cognitive skills. There are many older people whose cortex is extremely thin but who are mentally very sharp as well as physically active. Today we know that the brain constantly adapts to changes in the environment by creating new neural connections and pruning others. Even as we age, the brain is able to reorganize itself and compensate for the loss of cortex tissue thanks to the establishment of new networks. But for this to happen, the brain must be sufficiently stimulated.

The problem with retirement

Studies show that a decline in cognitive skills frequently occurs shortly after retirement. This is not surprising, according to Meyer. In place of a life characterized by structure and diversity of tasks, emptiness looms. The transition into retirement is something to be wary of. The first thing many newly retired people do is relax and unwind, and their social lives become less active. Meyer says this is like poison for the brain, so it is important that pensioners seek out new activities fairly quickly.

But what else can fledgling retirees do to retain their cognitive skills for as long as possible? Can puzzles like Sudoku and other brain training programs on the market have any effect? “You can solve Sudoku puzzles regularly and get better at them, even when you’re old. But that won’t help you if you need to buy a train ticket from a ticket machine in Oslo,” warns Meyer. This is because these training programs focus on specific skills that have little to do with everyday life. To date, no studies have proven that brain training exercises have a positive effect on other life situations. Instead, what pensioners need is as much varied activity in their everyday life as possible in order to stimulate the different senses and cognitive functions.

Movement, photography or learning to sew

Moderate physical activity, for instance, has a positive effect on the brain. A study of rats showed that young animals develop larger neural connections when they grow up in an environment with plenty of space to move around.

The same was observed in older humans: A study of 120 pensioners, for example, showed that a specific region of the brain – the hippocampus – grew by 2 percent in participants who went out walking for approximately 40 minutes three times a week. The hippocampus receives various memory-relevant details from different sources and processes them. It is particularly important for the formation of new memories. “If regular movement is not possible, there are other ways to indirectly and effectively train cognitive abilities,” says Meyer.

For example, in a study from 2014, senior citizens who took up photography or sewing saw greater improvements in overall memory performance compared with those who completed brain training exercises. Meyer stresses, however, that whatever the activity, social interaction is key, as it stimulates the brain on all sorts of levels. It activates the neurons in the frontal lobe, for example, which controls executive functions such as planning. Pensioners should therefore choose activities that give them pleasure and enable a sufficient level of social interaction.

Hearing but not understanding

A common obstacle to such activities is physiological hearing loss. Even a moderate reduction in hair cells – the tiny antennae in our ears – makes it more difficult to join in conversations. One reason for this is that with the onset of hair cell loss, less information reaches the brain, so the brain regions responsible for understanding spoken language shrink as well. This can lead to difficulties in understanding people, even though you can hear them well enough acoustically. This is dangerous, Meyer warns, because you need a good understanding of language to be able to interact socially. “So don’t take any problems with hearing and understanding lightly. Get your hearing aid adjusted if necessary,” he recommends. He and his research group have shown that affected regions of the brain can start to function properly again 15 weeks after a hearing aid adjustment.

“After your hearing aid has been adjusted, get out and meet new people, go out for walks, or learn something new and rewarding, like a foreign language,” says Meyer. This way, you increase your chances of remaining mentally fit and enjoying retirement to the full.