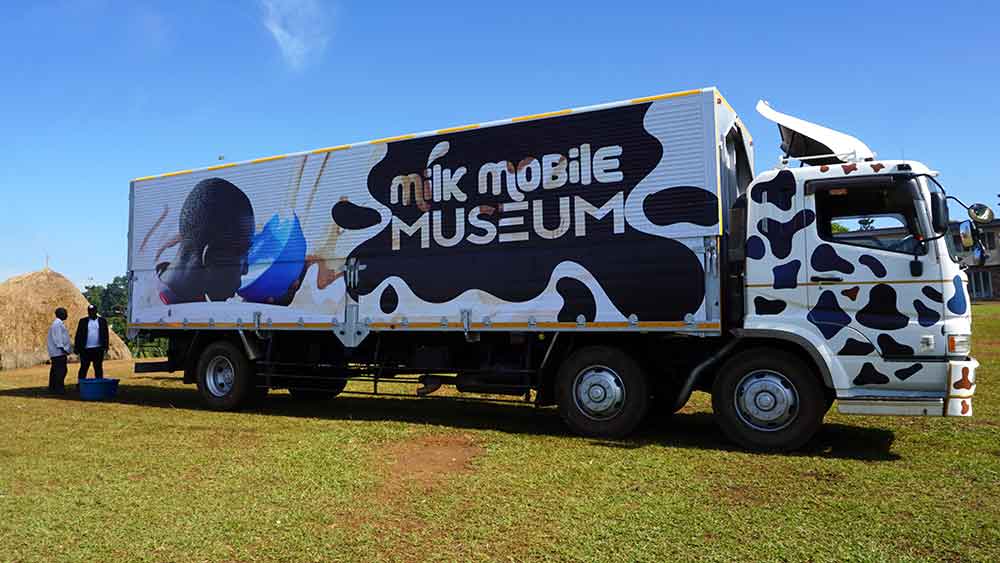 A herd of proud Ankole long-horned cattle graces one of the side walls of the twelve-meter long truck. On the other side, a young boy can be seen drinking from a bowl of milk.

Visitors climb a short ladder to make their way into the exhibition space, where numerous artifacts are presented on tables and in display cases: Bulbous gourds for producing ghee, a smoking device to disinfect milk containers, wooden milking buckets and even a cowbell.

This mobile exhibition is the result of a partnership launched in 2015 between the University of Zurich Ethnographic Museum, the Uganda Museum and the Igongo Cultural Centre in Mbarara, Western Uganda. Much like Switzerland, Uganda has a strong tradition of dairy production. Visitors to the mobile milk museum can learn about both countries’ cultural heritage in the dairy industry. In addition numerous contemporary methods – both domestic and industrial – for processing and storing milk are presented. The exhibition also draws attention to related topics such as the consequences of climate change, local methods for producing cattle feed, organic agriculture, and even social change and gender roles.

A tent in front of the mobile museum houses a large, generator-powered screen that shows related videos. In spite of all the commonalities, each region faces unique challenges when it comes to dairy farming – meaning they have to develop their own local solutions.

An enormous rush of visitors

During the day the exhibition is visited by schoolchildren, while adults are welcomed in the evening and on Saturdays. The first of many stops on the mobile museum’s cross-country tour was Ngora, a small savanna town located 250 km northeast of the capital Kampala. The truck parked in front of a large elementary school at the base of the Ngora rock. Soon afterward, several hundred children from local elementary and high schools were flocking to the exhibition space.

The crowd was large, around 400 children. On the following day, the crowd of visitors had already grown to 1,200. The children were divided into three rotating groups. The first watched the educational videos, while the second played a milk-related guessing game with Mike, a museum educator traveling with the exhibit. The third group visited the exhibition space in the truck, waiting patiently in a long line in front of the doors for their turn.

A total of three guides from UZH’s partner museums in Uganda supervised the schoolchildren during the tour. Using their knowledge, humor and flair for teaching, they guided groups of children of different ages through the exhibit: Explaining, demonstrating, answering questions – and reminding them not to touch the objects. To round out the event, discussion groups were held with the children after their visit to deepen what they had just learned.

An educational change of pace

Both young and old were enthusiastic about the exhibition. “We really learned a lot and are grateful for having had the opportunity to see the exhibition. Our children don’t get a lot of variety in the classroom, so this was something special for them. I was even able to learn a lot too,” said one high school teacher. “Some of our traditions quickly get forgotten,” added another teacher.  “So it’s important for kids to get to know their cultural heritage and learn to appreciate it. Here they also learn that dairy processing takes place in other regions and parts of the world too, which is sometimes similar and sometimes totally different.”

The exhibition also had an impact on local farmers. “I didn’t know that you could dry and store grass to feed cows when the dry season goes on too long because of climate change,” stated one older farmer, who requested more information on the method. One of the goals of the mobile museum is to create a better network between local farmers and regional experts so that the farmers know who to turn to when they have questions. The exhibition is intended to be more than just a vehicle for knowledge sharing: The idea is also to act as a place for sharing experiences.

After all, the museum on wheels can only do so much in terms of the education that is needed. “There are 140 children from our school here, but we have 1,300 who would like to come,” noted one teacher with regret. When asked what could be improved about the museum experience, visitors expressed the desire for practical learning to complement the theoretical knowledge: “It would be good if visitors could also milk cows themselves, pasteurize milk and make hay.” If the museums are successful in securing more funding, the operating period for the mobile milk exhibition can be extended.

All three museums are benefiting from this partnership. In particular, the partner institutions in Uganda appreciate exchanging knowledge and skills, being part of an international network and receiving financial support from Switzerland. They are also hoping the partnership can help them build their technical and exhibition design skills. “The joint research has also strengthened the relationship between the museums and the local communities. It is very important to us to be able to give back to our communities,” emphasized Nelson Abiti, curator at the Uganda National Museum. “The partnership is supporting our mission of preserving our cultural heritage as well as emphasizing its importance and making it accessible to future generations,” remarked James Tumusiime, director of the Igongo Cultural Center.

In recent years, ethnographic museums have increasingly come under criticism for putting other societies on display without involving the people from these cultures and their knowledge. The act of collecting foreign cultural artifacts and recent discussions about restitution have increased public pressure on museums to take a critical look back at their history and reassess their practices. In this context, international partnerships with museums and communities in the Global South have gained importance. “We can only find new paths forward by working together and engaging in continuous dialogue,” stated Thomas Laely, deputy director of UZH’s Ethnographic Museum.

For ethnographic museums today, it is not just about changing the nature of their exhibits, but also about trying out new forms of cooperation. In this regard, the Uganda Museum and the Igongo Cultural Centre in Mbarara are the ideal partners for the Ethnographic Museum at UZH. Reciprocity is one of the guiding principles of the partnership and is implemented wherever possible. For example, both a Ugandan and a Swiss videographer were used to film the mobile milk museum’s journey. Finding complementary perspectives and common ground contribute to knowledge exchange and mutual learning. With the mobile milk museum, the UZH Ethnographic Museum has succeeded in making new forms of information exchange possible – outside the walls of the traditional museum. The museum is also gaining practical experience in working together with partners from the cultures featured in its exhibitions. With this practical experience under its belt, the UZH Ethnographic Museum is now better positioned to contribute to current debates about the restitution of cultural property.

Visions of a Museum Partnership

The mobile dairy museum is, for the time being, the final phase of a partnership project between the Uganda National Museum, the Igongo Cultural Institute and the Ethnographic Museum at the University of Zurich. Since 2015, researchers in Uganda and Switzerland have been undertaking joint research and co-developing exhibitions. The exhibitions Drink deeply – Milk Exhibition (in Kampala) and The Power of Milk (in Mbarara), which focus on Swiss and Ugandan dairy practices, opened to great success in September 2017. Points of View, a now-closed exhibition at the UZH Ethnographic Museum, offered self-critical insights into the collaboration and enabled visitors to take a virtual excursion to the Ugandan museums.