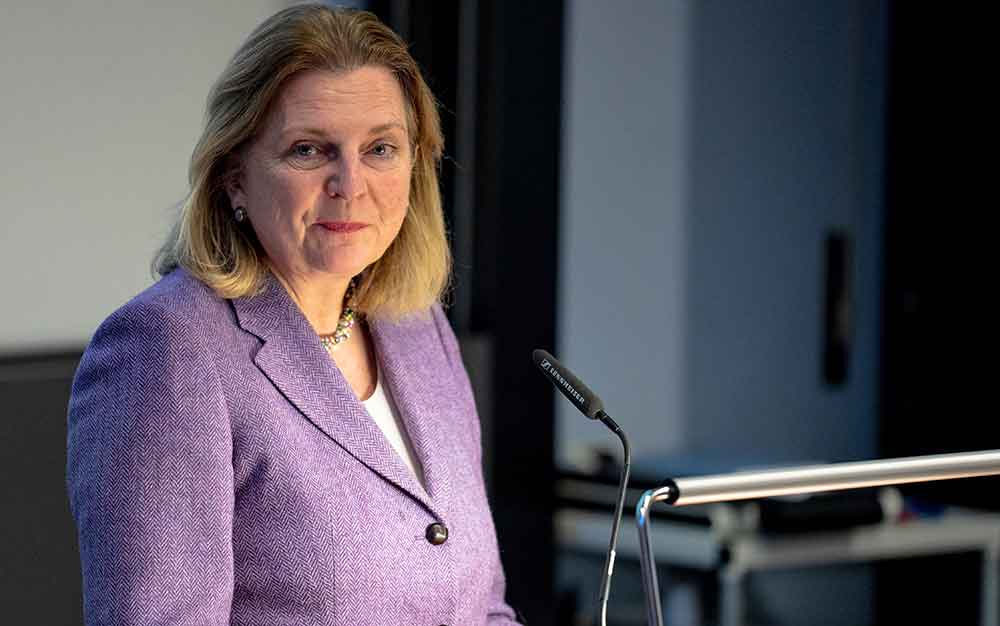 Karin Kneissl
The war in Iraq and Syria was based on oil interests, said Karin Kneissl in her lecture at the UZH. (Image: Angelika Lauber)

Shortly after Karin Kneissl’s working meeting with Swiss federal councilor Ignazio Cassis yesterday, the Austrian foreign minister stopped in at the University of Zurich – at the invitation of the Europa Institute. The minister for Europe, integration and foreign affairs has been in office since December 2017, replacing Sebastian Kurz, who is now federal chancellor of Austria. The 54-year-old former diplomat and energy analyst is an expert on the Middle East, and has published several books on energy and the Middle East.

Sykes-Picot did not apply

Kneissl’s lecture at UZH, then, was dedicated to the subject she is passionate about – the Middle East. She began by taking her audience on a journey back in time to the roots of the conflict in the Middle East, the First World War. Following the war, the two colonial powers Great Britain and France shared out the remains of the Ottoman Empire between them. Kneissl indicated, however, that this was not done according to the Sykes-Picot agreement (a secret deal between French diplomat Georges Picot and Englishman Mark Sykes) as generally believed.

“What was actually implemented was San Remo,” said the foreign minister. The new territories of the national states were organized according to their crude oil resources. The victors and the losers of the First World War were aware of the strategic significance of crude oil. In April 1920, the oil barons met at San Remo on the Italian Riviera, without the presence of diplomats and government representatives. The borders were drawn up on a paper napkin. “First the pipelines were drawn, then the borders,” observed Kneissl wryly. The result was a British-controlled Iraq, Palestine and Transjordan, while the French got Syria and Lebanon.

Wars in Iraq and Syria based on oil interests

The Iraq war of 2003 and to a certain extent also the proxy war in Syria in 2011 were based on oil interests. The countries now interested in oil are different ones, however – China, India, Turkey and Iran. There has been an upheaval in Middle East politics, with Europe and the USA no longer setting the tone. For the USA, oil from the Middle East is of less and less importance – for US governments since George W. Bush the focus has no longer been on the Middle East, as intervention is too costly in every respect. After all: “They have to fight wars, they have to stand up for puppet regimes.”

The post-First World War “Eastern Question” led to the Middle East conflict – a conflict with many complex aspects whose effects are strongly felt in Europe. “The region is very close to us indeed from a demographic perspective,” explained Kneissl, not pulling any punches. She was referring to the refugee crisis, which in her view was a direct consequence of the Iraq war of 2003. Kneissl spoke of a massive demographic explosion: 60 million people between the ages of 18 and 30 in North Africa and east of the Mediterranean unable to find work despite being well educated. The outbreak of anger of young people seen in the Arab Spring was not an uprising of losers. The demographic pressure would continue and no one could stop it; this was the issue of our times, said Kneissl. The Austrian foreign minister didn’t have a clear answer to the question of how Europe should deal with migration. She said she was in favor of conflict resolution and that dialogue with civil society should also be continued.

While Europe was concerned with containing the humanitarian tragedy, Chinese businesses were moving into the Middle East, continued Kneissl. China was investing a lot of money into the rebuilding of Syria and had a strong presence in the country – “Without Chinese financial support, Syria wouldn’t have been able to keep functioning.” But, Kneissl concluded, China’s interest was not in war, but in trade.

"A strong Europe in a changing world"

The next event of the University of Zurich’s Europa Institute takes place on 13 February. The special Churchill Lecture 2019 will be given by Dutch prime minister Mark Rutte

Europa Institute at the University of Zurich