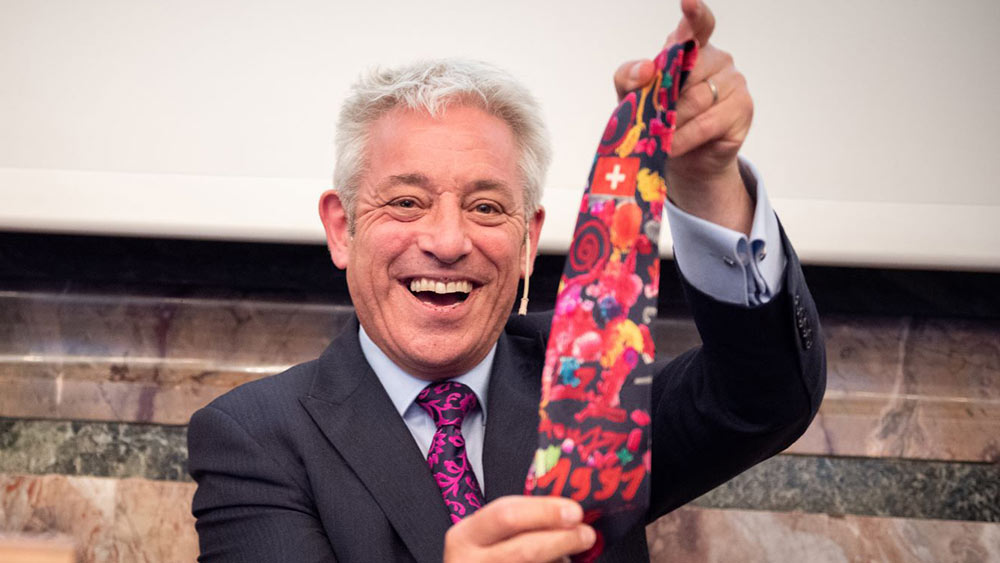 Charismatic speaker: John Bercow is given a Tinguely tie following his lecture at UZH. (Picture used with permission)

His usual cry of “Order! Order!” was not necessary last Thursday: The audience in the main lecture hall of the University of Zurich hung on his every word. John Bercow, the charismatic speaker of the House of Commons, enthusiastically regaled his 1,300 listeners (as well as the main lecture hall, the lecture was broadcast to six additional lecture theaters) with tales of his experiences during the turbulent Brexit drama. And although the topic was a serious one, he didn’t neglect to entertain his Swiss public with a dose of good old British humor, peppering his speech with anecdotes, asides and impressions of certain political colleagues. Speaking is clearly something that comes naturally to Bercow.

He said he felt honored to be invited by the Europa Institute to speak in the very hall where his “great political hero and colossus” Sir Winston Churchill held his famous speech setting out a vision for Europe, 73 years ago. Bercow pointed out though, that Churchill’s vision of a European and global network to ensure peace and uphold freedom was driven more by the desire for political stability in the post-war years than by economic development potential. Churchill had been an internationalist, not a narrow-minded isolationist. “There is something bigger than ourselves,” said Bercow quoting the former prime minister.

“Now, the EU has developed differently,” said Bercow, jumping forward to the present day and the current Brexit negotiations. The United Kingdom had three options, he said: To exit the EU with a deal, to exit without a deal, or to request an extension of the deadline for exiting the EU – each one only with the express agreement of parliament. The authorization by parliament was “non-negotiable”, stressed Bercow. He added in response to a specific question from the audience that a second referendum was certainly conceivable: “Nothing is impossible, but I don’t know which of these options is the most likely.” Only a very clever person or a reckless fool could predict how the Brexit saga would end, he said.

But amidst the witticisms, Bercow had one very serious point to make: “The law is the law, no one is above it, end of discussion.” As speaker, he said it was his clear role to ensure that parliament was able to exercise its decision-making powers. He admitted that this was not always easy to do given that  parliamentary rules were based on precedence, common understanding and tradition. The current Brexit debacle and the power battles between parliament and the government which for outsiders were hard to understand were damaging the whole country’s reputation and credibility, he said. 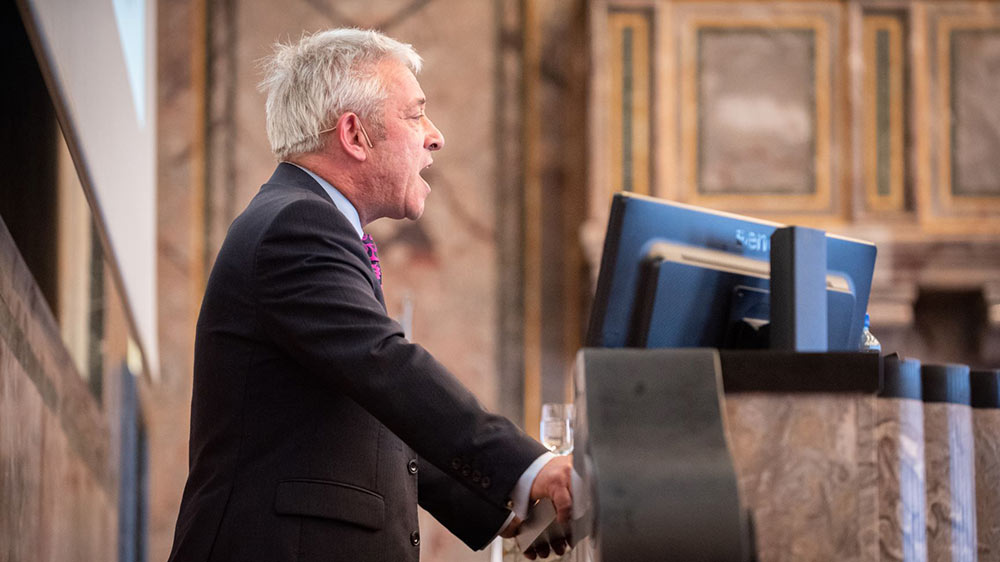 Hopes for the future: A more international outlook for society, and more decency and mutual respect in public discourse. (Picture used with permission)

A written constitution that regulates everything

Bercow therefore suggested breaking with the past: “We should think about developing a written constitution such as other countries have.” This could avoid misunderstandings and would set out the rights and obligations of the various institutions. An expert committee “with strong nerves and a lot of time” could draw up a written constitution following the motto “keep the best and improve the rest.”

This famous motto of Churchill has been Bercow’s driving principle throughout his 10-year stint as speaker, the longest tenure ever for the role, and he intends to keep doing just that until he steps down on 31 October. The speaker is proud of his “not insignificant” legacy. He said he had modernized aspects of the House of Commons, for example replacing the shooting gallery with a childcare center, establishing a visitors’ center to promote understanding of democracy, fostering diversity and ensuring that all workers in the House of Commons received at least the London living wage.

His hopes for the future – like Churchill – include a more international outlook for society, more decency and mutual respect in public discourse, and support for the younger generations. For Bercow, young people are the future of democracy: “If we want young people to respect us, we must treat them with respect.” From November he will have more time to spend with his family but will not retire completely. He plans to write and take on speaking engagements, to support his alma mater the University of Essex, of which he is chancellor, attend more Arsenal matches and keep following all of his great sporting idol Roger Federer’s tennis matches. And no, he has no plans to join a political party again.

Before moving on to Geneva to watch King Roger play in the Laver Cup the next day, Bercow took time to answer some questions from the floor. One audience member asked, for example, whether a redesign of the layout of the chamber would make MPs more likely to look for compromise rather than being so combative. Bercow’s answer: “Unfortunately a change of architecture does not automatically lead to a change of attitude.” Andreas Kellerhall, head of the Europa Institute at the University of Zurich, mentioned a joke he had recently heard: “Maybe in the year 2136, the British prime minister will still be making the annual visit to Brussels to ask for an extension. Nobody remembers exactly how this tradition started, but it draws crowds of tourists.” John Bercow took the ironic dig with good humor and a smile.

Finally, Bercow was presented with two Swiss gifts – a cow bell which Kellerhals suggested Bercow could use to get MPs’ attention during his remaining time as speaker, and a colorful Tinguely tie. He would certainly wear it, promised Bercow, whose changing array of jazzy ties has become nearly as famous as his booming voice shouting “Ooooorder!”