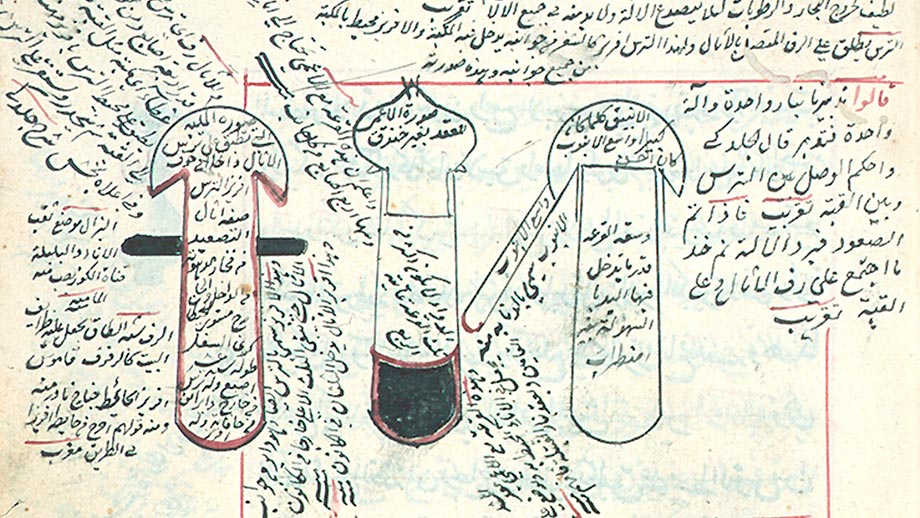 Islamic Studies
Alchemical poetry: A page from the commentary on "Splinters of Gold" by Ibn Arfa’ Ra’s (12th century).

Fez in the 12th century: A bustling metropolis in northern Morocco. The major city’s location at the crossroads of the trade routes between the Mediterranean and sub-Saharan Africa and between the Atlantic and the Maghreb make it a flourishing hub for trade in valuable raw materials of all sorts and home to a plethora of skilled artisans. Not long before, the reigning Almoravids, weakened by their defensive campaign against the attacking Christians, ceded the city to the Almohads, a movement of Berber tribes from the south of the country. The Berbers have thus been propelled into the upper echelons of the new political and religious elite of Fez, and as committed Islamists they quickly establish a new approach to scholarship and turn the education system inside out. The atmosphere in the city is tense.

In the midst of it all is preacher and law scholar Ibn Arfa’ Ra’s. The descendant of immigrants from Andalusia, he has worked hard to climb the social ladder and cement his respected position in Fez. He is known mainly for his poetry: Ibn Arfa’ Ra’s is the author of Schudhur al-dhahab, in English Splinters of Gold, a collection of rhyming verse. The 43 poems are didactic in style – quite typical for the time – and catchy like the lyrics of modern pop songs, making them easy to learn by heart. What is unusual, however, is the content of the 1,400 or so lines: The subject of Splinters of Gold is the process of alchemy.

Alchemy was a branch of natural philosophy which tried to explain the properties and reactions of natural substances. The first written mention of alchemical research was found in Egyptian and Greek manuscripts of the 6th century; alchemy was replaced in the 18th century by modern methods of chemistry and pharmacology. The more important modern science became, the more alchemy was seen as something occult and mystical – unfairly, because the aim of alchemists in antiquity and the Middle Ages was not just to produce silver and gold from base metals. They were also looking for a panacea for all types of illness – not an unrealistic idea, if we think about the discovery of penicillin in 1928.

Little is known about early alchemical practices in the Arabic world. “We don’t know who was practicing alchemy there,” says Regula Forster. “We just know that there was an alchemy scene.” The professor of Arabic studies found evidence for such a scene in sections of old manuscripts which describe alchemists as liars, or even refer to their execution. The alchemists clearly had enemies – the natural philosophers were a thorn in the side of the religious fundamentalists, although liberal Muslims were happy to let the alchemists be. “The relationship between religion and alchemy was ambivalent,” says Regula Forster.

To better understand this relationship, Forster wanted to find someone with a foot in both camps, religion and alchemy. Then she came across Ibn Arfa’ Ra’s, the preacher and alchemist in one, author of Splinters of Gold, the book which described alchemical processes using poetic language and religious imagery. The discovery seemed to be a great stroke of luck. Forster thought she would be able to use the example of Ibn Arfa’ Ra’s to show that religion and alchemy were able to coexist in the Arabic world.

But when she researched further, her hypothesis turned out to be false. After two years of work it is now clear: Ibn Arfa’ Ra’s is not one person, but two. “At some point they got mixed up,” says Forster. Many sources point to the fact that the preacher and law scholar is not the same person as the alchemist who wrote Splinters of Gold. The strange fusion probably came about because parts of the traditional Arabic names of the two men were gradually left out when the information was passed on or written down. Arabic names often consist of long chains of names of forefathers; if some are left out it can lead to confusion.

“Now, of course, I had a problem,” explains Regula Forster with a wry smile. She didn’t have to give up her project, though, but rather adjust her approach. Splinters of Gold, despite turning out to be written by a secular author, actually made a clear link between religion and alchemy. This can be seen above all in the numerous later copies of the – unfortunately lost – original by Ibn Arfa’ Ra’s. One example comes from the Iranian city of Qom. In the 19th century, the printing press was rarely found in the Islamic world. But a mullah in Qom, a major center for Shiite teaching, was clearly so impressed by the Moroccan Ibn Arfa’ Ra’s work that he copied it out again by hand. In the first part of the book, the mullah wrote sayings of the prophet, and in the second part he seamlessly copied out the verses of Splinters of Gold. For Regula Forster it was clear: “At that time alchemy was still being taken seriously, even in a religious context” – the link between religion and alchemy was real.

Other sources led the team of researchers to Egypt. There are many indications that Ibn Arfa’ Ra’s – now referring to the alchemist and author, not the preacher – settled in the Nile country. In a handwritten copy of a commentary on Splinters of Gold, unearthed by Juliane Müller, a member of the project team, in an Iranian library, the writer asserts that Ibn Arfa’ Ra’s personally dictated the text at the harbor of Alexandria. It’s possible that the great success that Ibn Arfa’ Ra’s enjoyed in Fez with his alchemical work Splinters of Gold displeased the Islamic Almohads and they caused trouble for the renegade bestselling author, leading him to emigrate to the more religiously and intellectually open-minded Egypt.

What is remarkable though, is that Ibn Arfa’ Ra’s gave speeches there. “The flow of knowledge at that time went from east to west and not the other way around,” explains Regula Forster. “It’s very unusual that an author from the west found listeners in the east.” Right up until the 20th century, handwritten copies of Splinters of Gold and its accompanying commentary were being produced in areas of modern-day Egypt, Syria, Iran and Iraq; around 100 are still traceable. Ibn Arfa’ Ra’s’s masterpiece was only printed once, in Bombay in 1881. Only a few copies remain from that print run, all the others were eaten by termites in the libraries and archives of India.

Getting close to the original

The aim from the beginning of the project was to reprint Splinters of Gold in an Arabic edition with a German translation and a critical commentary. Regula Forster and her three Zurich colleagues have already tracked down, read and compared 83 of the around 100 existing handwritten manuscripts. They have filtered out the less significant copies of the work in order to focus on the ones that are closest to the original and to reproduce the Arabic text to be as similar as possible to the text written by Ibn Arfa’ Ra’s 850 years ago.

Why go to such lengths? “I want to find out why alchemy was so popular in the Islamic world in such a religious society, and Ibn Arfa’ Ra’s’s bestseller is a good starting point,” explains Forster. Her underlying interest and her aim have therefore remained the same, even though her project unexpectedly took a different direction than originally planned. That change of direction doesn’t surprise or worry Forster in the least – quite the opposite, in fact: “Good research always yields results that are different from what was expected. It would be a bit suspicious if our research only ever confirmed our initial hypotheses. That would indicate a badly designed or just plain boring project.”