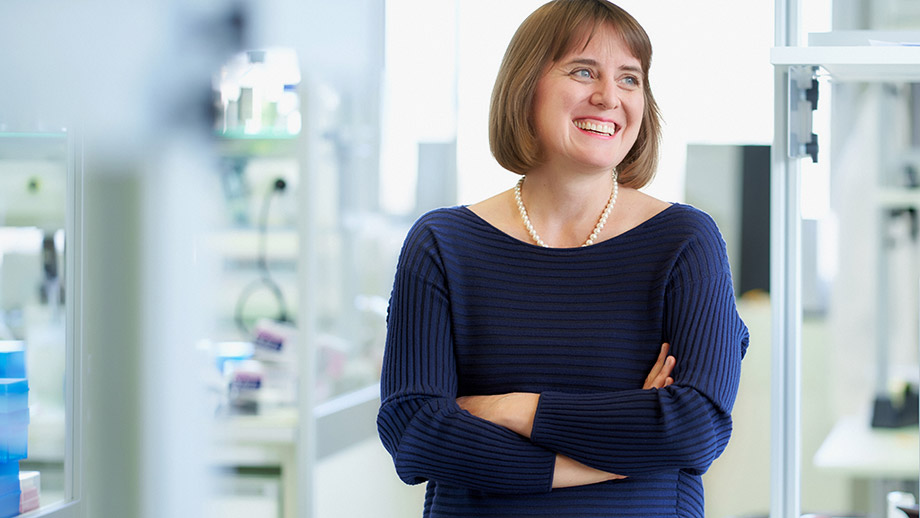 Max, age 18, is a model patient. He was born with chronic granulomatous disease (CGD), a hereditary immune deficiency that leads to repeated, often life-threatening, bacterial and fungal infections. It’s classed as a rare disease. Every pile of leaves, every visit to a children’s zoo, is a potentially lethal threat for children like Max. At age five he came from Germany with his parents to the University Children’s Hospital Zurich to have a therapy-resistant infection treated. A mycelium, growing larger all the time, was squeezing his bone marrow so much that he was paralyzed and could no longer walk. Max could easily have died.

Transplanting bone marrow stem cells might potentially have cured the problem, but the doctors in Zurich couldn’t offer the family that option because the infection was too far advanced, and no suitable bone marrow donor could be found. Instead, Max’s parents decided to have him undergo gene therapy as part of a clinical trial conducted by the University Children’s Hospital Zurich. This treatment was Max’s last chance.

It worked: Now he is cured and can live without any disability. Max gives other affected families – and the researchers – hope. But as in other first-generation gene therapy trials, there were major side-effects involved. Some of the people in the trial developed cancer or preliminary stages of cancer. Max did, too. “A side-effect of the first gene therapies was that some of the patients developed leukemia, which was a setback for gene therapy per se,” pediatrician and immunologist Janine Reichenbach recalls. “It forced researchers all over the world to go back to the drawing board, back to the lab.”

In the meantime Professor Reichenbach and her team at the University Children’s Hospital Zurich have developed a second and third generation of the gene therapy that saved Max’s life. “With what we know now, these procedures are considerably safer than the first generation of gene therapies.” A new trial with 10 CGD patients is about to begin under Janine Reichenbach’s leadership.

This was only possible because he had a little brother who turned out to be a suitable donor. Parents are rarely a good match. Databases of bone marrow and cord blood donors had failed to come up with a suitable donor for Max. His elder sister didn’t fit the bill either, as the surfaces of her somatic cells were incompatible.

For around one third of patients, doctors’ searches for a donor are in vain. “Without a suitable bone marrow donor there is currently no reliable, safe, non-experimental therapy. That’s why we’re putting everything into advancing gene therapy,” explains Janine Reichenbach. In the chromosomes of patients with chronic granulomatous disease there is a defect in a gene containing genetic information on scavenger cells (phagocytes) which means that these important players in the body’s immune system lack clout: The phagocytes eat the invaders all right, but they don’t manage to kill them off. As a result, fungi and bacteria easily get the upper hand in the body.

The basic idea behind the gene therapy is to transplant genetically corrected human cells. First the patient is given a drug that lures the blood-forming stem cells from the bone marrow into the blood. An apheresis machine skims these cells off. In the lab, the doctors then insert functional copies of the defective gene into these cells. The technical jargon for this procedure is gene addition. These “reloaded” cells are subsequently infused back into the body.

Before this is done, the patient needs gentle chemotherapy, effectively to make space for the corrected cells in the bone marrow. Once these cells are injected into the blood, they find their way back into the bone marrow, where they grow and form flawless phagocytes. “We don’t have to correct all the cells in the body. Genetically correcting around one-fifth of the scavenger cells is enough for the patient to get better,” says Janine Reichenbach.

Genes smuggled in in viruses

Artificial viruses are used to ferry the therapeutic genetic sequences into the genetic material of the stem cells, “smuggling” the corrected sequence into the nucleus and integrating it into the genetic material. The first generation of gene therapy for immune deficiencies used gammaretroviruses as gene ferries. But as subsequently emerged, these had the tendency to switch on growth-promoting genes, so-called oncogenes, which in some cases resulted in uncontrolled cell growth and leukemia. The latest gene therapy vehicles developed by Reichenbach’s team to be used in therapy for 10 CGD patients at the University of Zurich and the University Children’s Hospital Zurich from 2020 are artificially developed versions of lentiviruses. “In lab tests these have proved to be a thousand times safer than the first-generation gene therapy vehicles. And preliminary trials have also suggested that the long-term efficacy of the therapy is very likely to be better,” explains Reichenbach. If her hopes are borne out in the trial, she says the gene therapy could also be extended to other diseases.

But Reichenbach isn’t just researching techniques by which corrective genetic sequences are added to the genome; she’s also working on techniques where gene scissors can be used to precisely target and correct genes in the genetic material, in a process called genome editing. Reichenbach is working with Martin Jinek at UZH’s Department of Biochemistry as part of the ImmuGene Clinical Research Priority Program. Jinek is the joint discoverer of the groundbreaking CRISPR/Cas molecular genetic gene editing technology (see portrait on page 54).

“Precise gene correction is the future when it comes to immuno-defects and a whole range of other hereditary diseases, for example metabolic disorders, eye disease and diseases of the nervous system,” says Janine Reichenbach. This is because genome editing can allow corrected genetic sequences to be integrated virtually in their natural context. This, she explains, is particularly important in cases of tightly regulated gene expression. “So I hope it doesn’t take another 10 years before gene editing can be used in hospitals,” she says. At the moment the research lab is developing and refining the two types of therapy in parallel. The reason: “We want to be able to cure children with chronic granulomatous disease for whom no suitable bone marrow donor can be found right now, using gene therapy,” explains the pediatrician. That way children like Max and their parents won’t have to be afraid of lethal infection every time they play outdoors.

Since 1 January 2019 there has been screening for serious diseases of the immune system for all newborns in Switzerland. Before that, the newborn screening started in the 1960s had primarily focused on detecting serious congenital metabolic disorders. Now it can also detect defects in the body’s immune system.

Children affected have a defect in their genetic material where information on the maturation of so-called T- and B-cells is located. These immune cells are jointly responsible for recognizing and neutralizing pathogens. When there’s a defect, simple, pervasive pathogens can spread unimpeded in the body and lead to lethal infections if they’re not detected and treated rapidly.

“We’re really happy with the new, combined test, which sounds out the development of both T-cells and B-cells,” says pediatrician and immunologist Janine Reichenbach. Switzerland is one of the first countries in Europe to offer this kind of combined screening on a nationwide basis. “Before now either these children would have been passed over entirely because they died early and the origin of the defect remained undetected, or the disease would have only been diagnosed once serious infections had emerged or they failed to thrive. But then it’s often too late to treat them,” says the immunologist from the University Children’s Hospital Zurich.

After a heel prick, four drops of the infant’s blood are collected on a spot card and sent to Zurich for analysis at the Swiss newborn screening lab. Rapid action is required, particularly if severe combined immunodeficiency (SCID), a serious defect of the T-cells, is suspected: The mother has to stop breastfeeding immediately to rule out the risk of infecting the child with cytomegalovirus. The child should then be brought to the center for highly specialized pediatric immunology at the University Children’s Hospital Zurich within 24 hours. “Naturally it’s a shock for new parents with an apparently healthy baby in their arms to find out their child might have an immuno-defect,” says Janine Reichenbach, “but if the suspicion is confirmed, infants with SCID need prophylactic medication to protect them from infection, followed by a stem cell transplant.”

Apart from this, a small number of hospitals abroad are already offering gene therapy for certain forms of SCID. It’s conceivable that this therapy could be offered in Switzerland as well in the future. It’s quite possible that newborn screening might one day also be extended to other immune deficiencies such as chronic granulomatous disease (see article). On the basis of the frequency of SCID assumed until now, the professor of immunology and the Swiss newborn screening team had expected to see one or two cases each year. But already in January, screening had pinpointed two infants with the condition. “It might be that more children are affected than we assumed. If that’s the case, we’ll find out in the next few months,” says Janine Reichenbach.