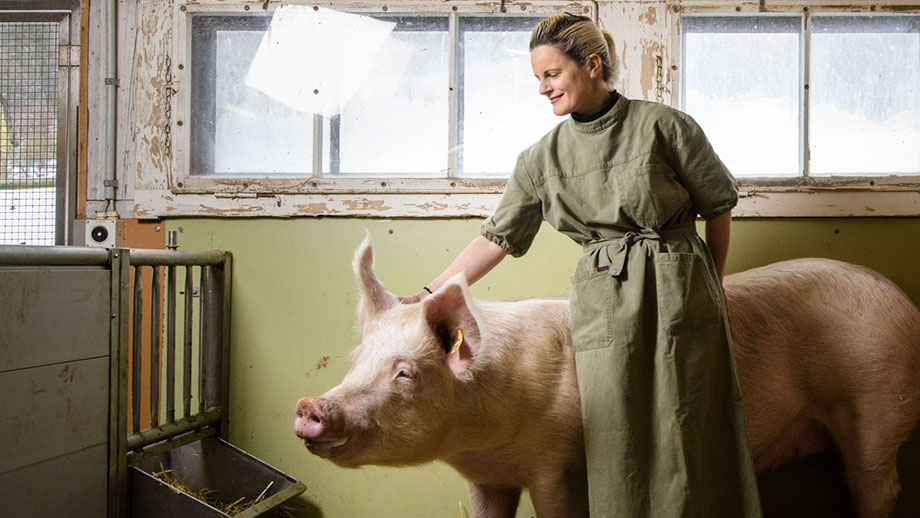 The ability to walk upright, use language, develop technology – all these peculiar human characteristics are of little interest to pathogens. If they can make themselves comfortable in a pig's intestine, they are just as likely to feel comfortable in a human gut. The name for this phenomenon whereby pathogens can be transmitted from animals to humans is "zoonotic potential".

To be honest, in the vast majority of cases zoonosis simply results from the fact that a pathogen is not particularly choosy about searching for a host organism. In other words, the anthropocentric perspective makes little sense here. It is still not clear which pathogens practice this method of happily jumping from species to species, as zoonosis is still a relatively young field of research – even though individual cases, such as rabies, have been known since medicine began. Current estimates say that there are around 200 such diseases that occur in both animals and humans and can be transmitted in both directions, and scientists are looking at the full range of pathogens, whether prions, viruses, bacteria or fungi.

It is the particularly adaptable representatives of these infectious visitors that are under research at the Institute of Veterinary Pathology of the University of Zurich: Chlamydiae. These are miniscule bacteria that behave rather like viruses in their replication process, i.e. they can only reproduce within a single host cell. Some chlamydia species thrive in pigeons and parrots, others in snakes, frogs and koalas – and several thrive in humans too. In the latter case, they represent the great unknown among venereal diseases, as chlamydia is transmittable from person to person through sexual contact.

The UZH researchers have gained such a good international reputation for their expertise that Zurich has been the world's international reference laboratory for chlamydiae for over ten years. Reference laboratories like this act as collection points for accumulating knowledge on specific pathogens, the aim being to gain an overall picture of their distribution and disease mechanisms. In the case of chlamydiae, this has proven to be a particularly challenging task, as they continue to take experts by surprise. "The closer we look, the more we find," says Nicole Borel, head of the reference laboratory. At the time of writing, two new species of chlamydiae had just been discovered in snakes.

It could also be said that the more science finds out, the more mystifying these tiny organisms become. Long thought to be viruses, they were eventually categorized as bacteria – and studies conducted a few years ago showed that chlamydiae are closely related to cyanobacteria, ancient unicellular organisms capable of producing oxygen. We could therefore also categorize chlamydiae as plants, since they display a number of unusual plant-like vestiges on both genetic and physiological levels.

Does this mean that chlamydiae are a type of infectious plant? Or perhaps quiet little plants that don't really mind which host they choose? Based on Nicole Borel's experience, the various categories quickly become intricately intertwined. The figures that she and her team collected from pig fattening farms, for example, revealed chlamydiae-laden DNAs in over 90 per cent of the pigs. This is similar to other sexually transmitted diseases that have largely "infested" society, such as the herpes simplex viruses that most of us carry, but which only lead to outbreaks in a small percentage of the population. Borel believes that this behavior pattern could conceivably apply to chlamydiae too, thanks to their ability to retreat into "reservoirs" like the intestine and stay there largely unnoticed.

Could it even be that this state of retreat is their normal state – that they are simply looking for a cozy nest in our gut, as a normal part of our intestinal flora? And that causing infections in their host is an exceptional situation that they are not even actually looking for? This would then turn the zoonosis mystery into a question of perspective since, in veterinary medicine, doctors automatically view bacteria as pathogens – starting in the case of chlamydiae with sheep and goats, where they are still held responsible for many spontaneous abortions today. "Chlamydiae are the most common infectious causes of spontaneous abortions in Europe," says Borel.

Humans can also be infected by the same pathogen – which can be dangerous for pregnant women, as shown by the many documented cases of miscarriages due to chlamydial infection in sheep or goats. Doctors of human medicine are now showing greater interest in chlamydia as it is a sexually transmitted disease that has experienced a boom in recent years and is now often mentioned in the same breath as HIV and syphilis. Especially in women, the infection can lead to complications such as pelvic inflammation, ectopic pregnancy and sometimes even infertility.

Statistics show a marked increase in chlamydial infections in humans over the past twenty years. In Switzerland, among the diseases that must be registered by law, chlamydia has even become the most frequently diagnosed sexually transmitted infection. The reason for this is not clear, and many experts believe that it might only be an artificial increase and that chlamydia had probably simply flown under the radar of medical diagnostics for a long time.

Over the years, it has become standard practice for the reference laboratory in Zurich to work closely with doctors of human medicine, although the veterinary doctors have a head start when it comes to chlamydiae-related expertise. According to Borel, no human medicine laboratory can compete with the range of methods that the team at UZH uses to follow chlamydiae. We can therefore assume that these unique bacteria are still capable of surprising us and that we are perhaps just beginning to understand the role they play in the community of humans and microorganisms, and in the large grey area between sickness and health.

One of Borel's current research projects aims to find out how it is that chlamydiae cause sickness when appearing in combination with other infectious pathogens. Could multi-infections like these be the reason why these unobtrusive intestinal inhabitants suddenly transform into particularly undesirable intruders? The outcome will no doubt be of interest to doctors of human medicine too.