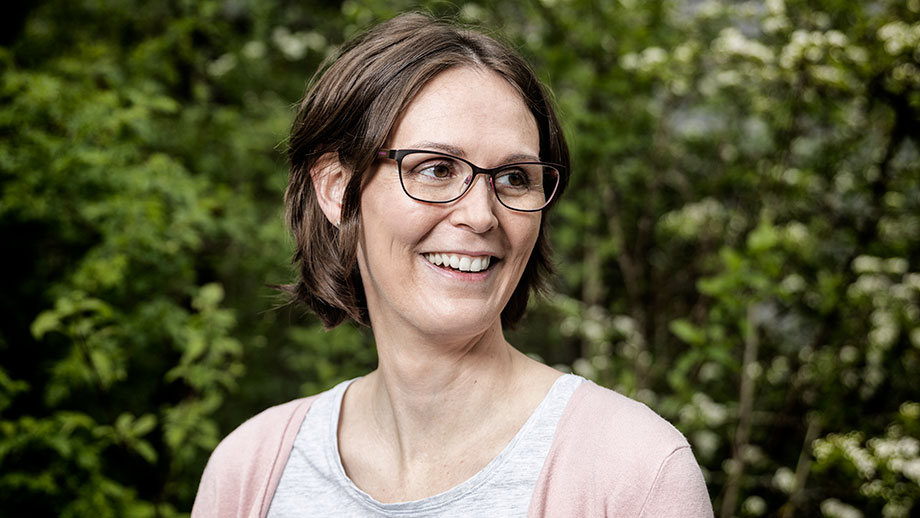 In Irchelpark everything's turning green. The sun is shining, plants, grasses and trees sway in the wind, the air smells of spring. Nature is at its prime.  But it is not only outdoors that photosynthesis is in action, but indoors too – in the lab headed by Sandra Luber, professor of theoretical chemistry, whose work on artificial photosynthesis forms part of the university research focus project, Solar Light to Chemical Energy Conversion (LightChEC). Her group is investigating the solar-driven, artificial splitting of water into oxygen and hydrogen. Hydrogen is particularly coveted, as it is a promising raw material for the development of environmentally friendly energy sources and fuels.

The researcher – who has already won countless prizes for her work – walks through Irchelpark every day on her way to work from her home in Wipkingen. The walk gives her time to switch off, Luber says.

In her heart, Sandra Luber is a country girl. She grew up near Regensburg in Bavaria, Germany, in an exceptionally musical household. Luber giggles as she talks, and from her vivid descriptions it's easy to imagine how she and her two sisters had fun touring up and down the country for their performances, she on the zither or on the double bass, her sisters on the violin, guitar or accordion. Even today, the German radio station Bayerischer Rundfunk still broadcasts recordings of the trio from time to time, the SNSF professor modestly admits. A career as a musician would have been an obvious choice.

But it was not to be. Although she went to an arts high school and even as an amateur musician received several prizes, Luber was not inspired to study music. She wouldn't make any money, she thought and took the pragmatic decision to study government administration – a job as civil servant would be a safe bet and the university and the city of Regensburg appealed to her. But after half a year she was already so bored that she dropped out.

Luber sighs with a laugh. Boredom has always been her problem – and the driving force behind each new career step. She then quickly decided to study chemistry – something solid and sensible, she thought, and besides her other favorite subjects of physics, music and Latin, chemistry was the subject she had been most interested in at school. Having specialized in arts at school, she first had to catch up on some subjects at the University of Erlangen-Nuremberg, but that didn't present her with any great difficulties.

She and her fellow students spent their time in the laboratory tinkering and experimenting with test tubes and Bunsen burners, but soon this wasn't enough for her. She wanted something more precise. "I wanted to know exactly what was going on," says Luber. And this is how she came to theoretical chemistry, a field in which she could calculate, describe, simulate and program what was going on with precision – and finally gain deeper insights. When she later came to ETH as an exchange student, her performance was noticed by a professor who encouraged her to stay in Zurich and do her doctorate – which she did with her usual ease with a thesis on quantum chemistry.

Luber looks out of the window, where the lush green leaves on the trees flutter in the breeze. "Photosynthesis is a tough nut to crack," says the chemist. Yet it sounds like a dream, as artificial photosynthesis could solve major climate issues in one fell swoop. It's no wonder that research groups all over the world are frantically trying to work out how to imitate nature. The group in Zurich is concentrating on artificial water splitting, in which oxygen and hydrogen are formed by light absorption. Luber is interested in Hydrogen. Hydrogen is a promising raw material, as it is easily convertible and capable of storing the energy originally injected into it by sunlight. Hydrogen is a valuable energy source that could be used as a substitute for natural gas or as a fuel to replace environmentally harmful fuels such as petrol.

Luber explains how nature does it. After splitting water with sunlight, plants release the oxygen we need to breathe and then form energy-rich sugar molecules that they use for themselves. The aim of artificial water splitting is to produce not only oxygen but hydrogen too. But how do we get to the hydrogen?

The natural photosynthesis that takes place in plants day in, day out, is still a mystery and has not been conclusively researched and described," says the chemist.  One of the sticking points of artificial water splitting are the catalysts. So far, not one has been found that works: "Either the catalyst isn't robust enough and disintegrates immediately after its work is done, or it's not efficient enough or too expensive," says Luber. Having said this, the professor and her team of researchers have now managed to develop the ideal starting model: A transition metal-based cubic catalyst. "This could actually make artificial water splitting possible," says Luber. The key point is that the cubic core has a cube-like structure with a cavity inside – just like the catalyst in the natural plants outdoors. "Now we have an ideal model that is close to nature and provides us with a solid basis for further research in this complex field," Luber says.

The chemist talks about her career as though it had been a walk in the park. Although a lot had indeed fallen into her lap, it wasn't always that easy. As a woman working in such a male-dominated domain as theoretical chemistry, she must have had to put up with a lot? She thinks about it. Yes, it was difficult sometimes. There were times when she wasn't taken seriously, or depicted as incompetent, or had ideas stolen from her. But Luber doesn't give up easily. And she's clever. So she accepted every challenge that came her way, yet was often quickly understretched.

After completing her doctorate at ETH, she dabbled in bioinformatics in Basel with a job in the private sector that caught her eye. But she soon got bored there too. She then received an e-mail at just the right time saying that a postdoctoral position at Yale University was available – and would she like to come? Of course she did, and this is where she went into the research topic that still occupies her today: Water splitting through photosynthesis.

Outside, the trees sway in the wind. The professor has neatly tidied up her small office. She spent a good year at Yale, then had to return to Europe for personal reasons. She first ventured into the private sector again, working for BASF and beginning training as a patent attorney. But, yes you’ve guessed it – it soon became too dull for her there, too. She was doing the same thing over and over again; it was clear that she had to return to research. So, in 2012 she joined Jürg Hutter's team at the University of Zurich, where she did her habilitation. Anticipating the next question, she shakes her head and laughs. No, she has never been bored again.

With so much work and dedication, is there any time left for music? Luber ponders the question, then nods. Spontaneously, from time to time she plays the zither or piano at home. She also goes dancing. Her favorite style is swing and blues – a relatively free style for couples and a legacy from her time at Yale. Again, we look through the window at everything turning green. Climate change is a highly pressing problem that urgently needs solutions. How long is it going to take before we get to this stuff of miracles, hydrogen? It's hard to say.

Luber glances down at her rounded belly. One thing is sure: The researcher will do everything within her powers for the next generation.