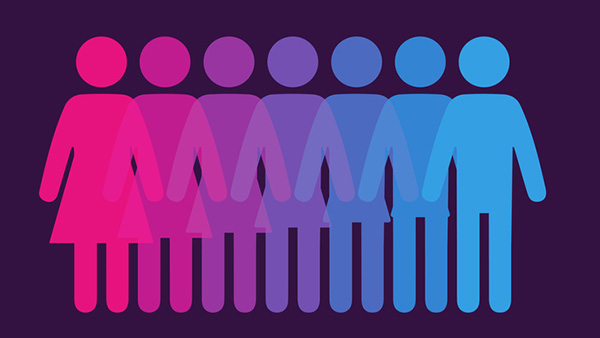 Many people go through life as a man or a woman and don’t even think about their gender identity – to them it’s something obvious. Meanwhile, people who admit to feeling uncomfortable in their male or female body fall outside of societal norms and are seen as strange or “other”. There are around 32,000 people identifying as transgender in Switzerland.  In addition, there are those who are non-binary – people who do not identify as male or female and may place themselves somewhere on a spectrum between male, female or intersex.

For a long time, transgender people were believed to be suffering from a type of mental illness. This attitude has since changed, and the World Health Organization recently resolved to adapt its International Classification of Diseases (ICD-11): From 2022, “gender incongruence” will no longer be classified as a mental disorder.

The UZH community also includes people identifying as trans. But they can face certain difficulties if they are open about their identity. In addition to the emotional and possibly also physical challenges, there are legal questions to be considered, such as change of name and personal status in legal documents. In the workplace, many transgender people worry about the reaction of their colleagues and managers if they come out. The Office for Gender Equality staged a packed-out event last Thursday in the main lecture hall entitled “Trans* an der UZH – was bedeutet das?" (“Trans at UZH – what does it mean?”).

The topic of trans identity was approached from four different angles: Hannes Rudolph of the Transgender Network Switzerland explained the different terms used and their meanings. He made the case for “unconditional acceptance” of people who were unable to identify with the role assigned to them at birth. To create an atmosphere of acceptance, it was important to also look at language use and behavior. Respect for transgender people also meant not embarrassing people or making fun of them. For example it should be a matter of course to address trans people with the first names and pronouns that they themselves have chosen. A good example was the form of address used by the Student Services team in their correspondence with students. They do not address the letters or e-mails with Dear Mr. or Ms. but instead write “Hello” followed by the recipient’s first name and surname.

Stefania Simone, a nurse at the UniversityHospital Zurich, talked about the medical side of gender reassignment treatment. She explained how hormone therapy with estrogen or testosterone could cause changes in the body, and said that in the course of a gender reassignment, professionals from several different medical disciplines had to work closely together. She recommended that transgender people also get psychological support during their treatment such as through psychotherapy or self-help groups, to help them to deal with the sometimes strong reactions of their social circle to their coming out, and to give them tools to handle the next steps more easily.

The next contribution was from a UZH employee who spoke about her own experiences. When the IT specialist began working at UZH she was a man; today she is a woman. This significant personal change had been met with understanding from her closest colleagues and above all from her managers, she said. That had been very helpful, although she had also received some negative reactions. “While I was transitioning from man to woman, I didn’t dare take public transport anymore,” she said. The looks she got were too disrespectful. But there were also funny situations. Once a professor came into the office and asked for her by her (then masculine) name.  “When I stood up, she looked around for a moment in confusion, and then we both laughed.” That was a positive experience – humor can sometimes be helpful, said the IT expert. A member of the audience asked if she would call herself a trans woman. The answer: “No, I’m a woman.”

Legal expert Alecs Recher then addressed the legal questions and pitfalls in relation to trans identity. He said that the term was not recognized in Swiss federal law. However, in public law the right to protection of private life was applicable. According to Recher, there were only very few lawyers who were familiar with the area of transgender identity. Therefore, it could be difficult for trans people to get legal help in terms of changing official documents, on issues of child custody, or simply advice about employment or renting a flat. Unisex toilets – the subject of so much controversy and debate – are just a small problem for trans people: A much bigger problem is health insurance. Insurance companies often use delaying tactics or refuse to pay for operations. Another unresolved issue is the official personal status of non-binary people who do not identify as either man or woman.

Recher stressed that trans people did not suffer from being trans, but rather from being misunderstood by those around them. But, he said, despite everything, the situation in Switzerland was relatively good compared to many other countries where the rights of trans people to freedom and self-determination were much more restricted.