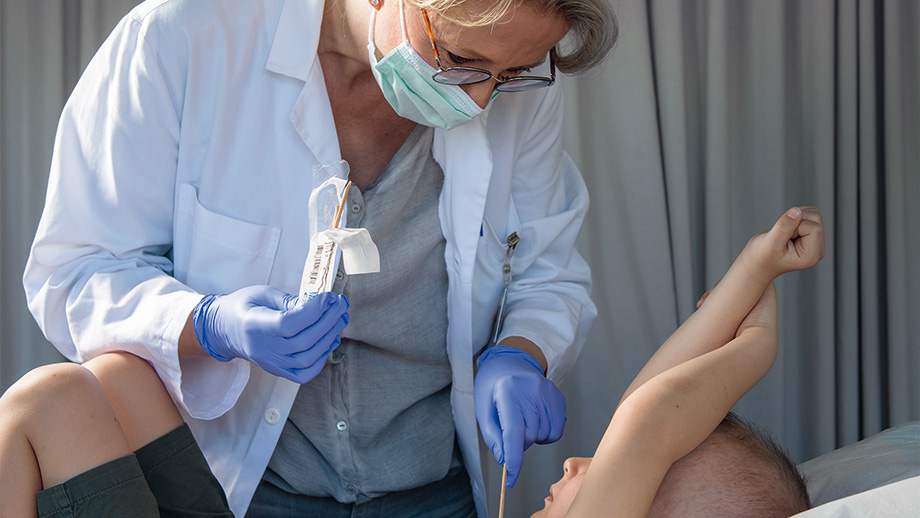 Physician Nicole Bodmer treats children with blood cancer at the University Children’s Hospital Zurich. The most common cancer of this type is acute lymphoblastic leukemia (ALL). Until about 30 years ago, this diagnosis meant that the affected children and youths would die within only a few weeks. Today however between 80 and 90 percent of patients with ALL survive over the long term.

But what’s remarkable is that the majority of sick children are cured with medication that has been available since the 1970s. “The most recent medication that we routinely use following initial diagnosis was approved in 1983,” says attending physician Bodmer. The fact that today much fewer children die from leukemia isn’t owed to any particularly potent pharmacological product, but instead is the result of optimizing the use of available therapies tailored to the specific clinical picture. This is made possible through new methods of analysis that enable scientists to genetically and immunologically define the cancer cells and systematically fight them.

The major innovation that today saves the lives of many of Nicole Bodmer’s patients didn’t take place in pharmacology, but in biology, and more specifically genetics, which has greatly increased the precision with which the various subtypes of leukemia can be determined. “In the 1970s, scientists used the number of degenerated white blood cells to determine the risk groups for leukemia treatment,” explains Bodmer. “Today we know that the white blood cell count isn’t really that relevant. Instead, it’s much more important to know the type of blood cancer we’re dealing with.”

Whenever a child with suspected leukemia is referred to the University’s Children Hospital, a bone marrow examination can quickly confirm or reject the diagnosis. “We can then immediately start treating the patient,” explains Bodmer. The earlier the treatment is started, the quicker the degenerated white blood cells that are clogging up the blood vessels and causing symptoms such as fever, nosebleed and bone pain can be reduced. Generally within about a week, the blood cancer cells’ genetic fingerprint is known, and this knowledge can then be used to decide which kind of therapy offers the most promising path forward.

For around 70 to 80 percent of young patients, the chances of recovery are deemed good, and they can thus be treated with a less intensive chemotherapy. Only two weeks later, the doctors will assess how well the patients are responding to the therapy. “There are cases where already at this stage, hardly any more blood cancer cells can be detected,” says Nicole Bodmer. These children’s chances of survival are between 85 and 90 percent, and a study is currently under way to find out whether chemotherapy can be reduced to keep the side effects and collateral damage as low as possible.  Around 20 percent of young leukemia patients are less fortunate, since either their disease’s genetic profile is unfavorable or their response to chemo isn’t sufficient. These patients require a more complex and intensive chemotherapy, and sometimes also a stem cell transplant. Their chances of surviving the disease drop to around 50 percent. “There’s not much we can do for these children in terms of conventional medication and methods. We need new therapies,” says Nicole Bodmer, who as study physician is overseeing the Switzerland-wide study into children’s leukemia.

Bodmer and her colleagues at the University Children’s Hospital Zurich thus have high hopes for immunotherapy with the antibody blinatumomab. “We’re treating some of the children with the new therapy instead of two rounds of chemotherapy,” says the physician. The antibody connects the body’s T cells (immune cells) with the tumor cells. Thanks to blinatumomab, the T cells can recognize the tumor cells, attach themselves to them, and release a toxic cocktail that destroys the cancer cells.

This immunotherapy could combine two desired effects: It could be a new, more potent therapy for high-risk patients who don’t respond to chemo – well or at all – while at the same time being less harmful. “It’d be great if we could increase the high-risk patients’ chances of survival by 10 to 15 percent,” says the pediatrician. “So far we’ve used blinatumomab a few times for relapsing patients. Our experiences have been largely positive.”

If all else fails, CAR T cell therapy could be an option in certain cases; this is another new form of immunotherapy, but which cannot yet be performed in Zurich. CAR T cell therapy involves taking T cells from the patient’s blood and genetically engineering them so that they produce receptors on their surface called chimeric antigen receptors, or CARs. These receptors allow the T cells to recognize, attach themselves to, and kill the cancer cells. When these engineered T cells are released back into the patient’s blood, they thus trigger an immune response of the body. There is currently one drug on the market for this therapy, Kymriah, which is produced by Novartis. However, at about 500,000 Swiss francs, the treatment costs are still extremely high. Bodmer hopes that in the future CAR T cell therapies will also be available in Zurich.