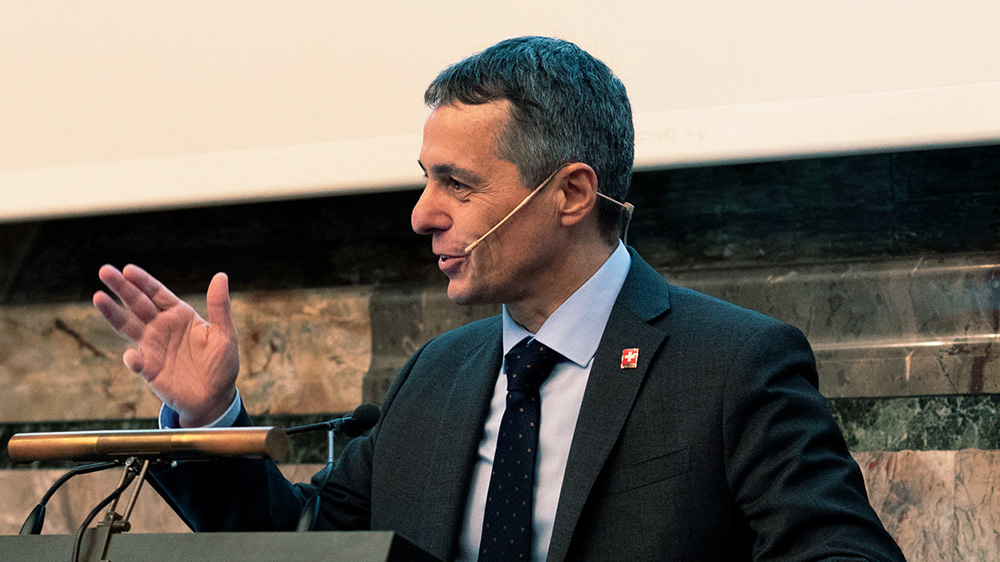 Federal Councilor Ignazio Cassis was in good spirits as he entered the packed-out main lecture hall at the University of Zurich to talk about one of the most pressing issues of the day: Switzerland’s place in Europe. The Foreign Minister, effusively greeted by the attendees, clearly felt relaxed and welcome at the university. In the audience were the head of the Swiss National Bank, political bigwigs and representatives of the EU in Switzerland.

Right at the beginning of his talk, the minister made his position clear: “Switzerland is at the heart of Europe, and Europe is in the hearts of the Swiss.” That much was indisputable, even if some preferred to think of Switzerland as a lonely island, said Cassis with a wink.

He had been assigned to the Department of Foreign Affairs by his colleagues in the Federal Council, said Cassis, a physician by trade. He was happy with the assignment, as after 25 years of grappling with health insurance paperwork he was ready to discover a whole new world.

He was now going to take his audience on a journey through time, describing the long-distance endurance race that would reach the finish line in a few weeks. There were still a few hurdles to clear, though, said Cassis, clearly alluding to the institutional framework agreement with the European Union (EU), for which he was urgently making a case. The negotiation time frame was tight, because from May 2019 elections in the EU meant that things would be unsettled.

The primary aim of the bilateral path was, according to Cassis, to make access to the EU single market, essential for Swiss business, as barrier-free as possible. To achieve this aim, it was necessary to negotiate, despite pressure from the EU and resistance from within Switzerland. “Our country has a deep aversion to concentrations of power; it is characterized by federalism, direct democracy and the system of part-time public service,” said Cassis.

The EU was of great importance for Switzerland, however, with every third franc in Switzerland being earned through trade with the EU. “We are talking about a trading volume of 1 billion Swiss francs per day,” said Cassis.  In addition, in Switzerland 1.5 million jobs were connected with products exported to the EU.

Cassis initially gave some background to the current situation. In over 46 years, Switzerland had signed around 180 agreements with Europe, of which 20 to 25 were very significant. As with all partnerships, relations between Switzerland and the EU had had their ups and downs, with various disputes and reconciliations. But it was also important that in the future, the bilateral agreements would grant easier access to the markets for employment, goods and services, as well as improved economic regulatory conditions and deeper cooperation.

In order to make it easier to understand the somewhat complicated web of agreements, Cassis cited two different types: Firstly a bilateral market access agreement, and secondly association and cooperation agreements. The latter included agreements of great importance for academia, such as the research agreement Horizon 2020.

The Federal Council had the following strategic aims, said Cassis: Creating legal security, ensuring accountability, expanding market access and regulating cooperation in certain sectors, such as the energy industry. The Swiss people had voted for the Energy Strategy 2050. “We want to move away from nuclear power, but we can’t do that on our own, despite our storage reservoirs,” said the Federal Councilor. But getting internal political acceptance for the negotiations with the EU was difficult at the moment. Nevertheless, Cassis reminded the audience: “Doing nothing is not an option.”

“If we stand still, access to the market will be eroded,” said the Federal Councilor. The institutional framework agreement was only one instrument regulating relations with the EU. It was true that even the name of the agreement made people anxious, acknowledged Cassis. But institutional simply meant relating to legal regulations between the EU and Switzerland.

The framework agreement provided the scope for Switzerland to dynamically adopt EU law in certain areas in order to ensure as smooth a functioning as possible of the bilateral agreements. Dynamically, qualified Cassis, didn’t mean automatically, because Swiss law-making processes, including the right to referendums, remained intact. If Switzerland were to decide against a particular EU law, the EU could bring in counter measures such as for example the partial suspension of an agreement. A court of arbitration would then decide on the reasonableness of the counter measures.

A plus for Switzerland

Cassis stressed that the negotiations with the EU were in the end stage. However, a few questions still remained open. For Cassis as chief negotiator, he had red lines that were non-negotiable. He cited the accompanying measures of the free movement agreement (“flankierende Massnahmen”), the question of EU citizens’ rights and unemployment insurance.

One of the sticking points related to what means Switzerland was allowed to use to protect its wage levels. In the EU, there was resistance above all to the rule that companies from the EU carrying out work in Switzerland had to register the fact eight days in advance. The rights of EU citizens also still needed to be discussed. EU citizenship law gave EU citizens rights that went beyond those contained in the agreement on the free movement of persons, such as the right to social welfare without previous employment in the country.

At the end of his talk, Cassis again emphasized the urgency of the EU negotiations. Switzerland would of course survive if no agreement could be met. But, in order to maintain a stable environment for trade, investment and important cooperation programs such as the research program Horizon 2020 and its follow-up seven-year program, it was important that the negotiations ended on a positive note. “It’s starting to become a pressing issue,” he concluded, and was met with a hearty round of applause.