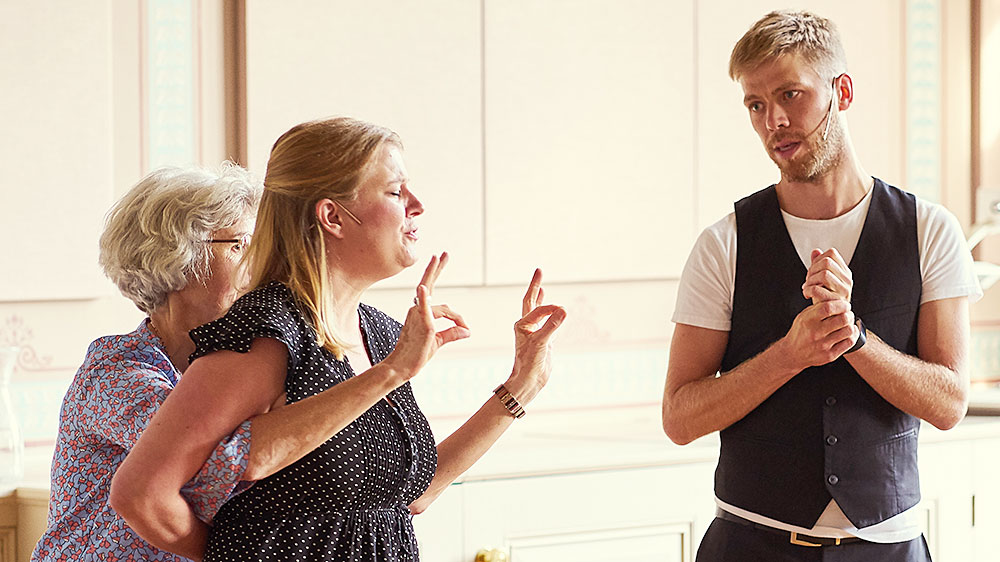 Image Gallery
Jahresveranstaltung Graduate Campus
Science and creativity can go hand in hand, as demonstrated by the improv theater group “anundpfirsich” at the Annual Ceremony of the Graduate Campus. (Picture: Laura Herrera)

Promoting, networking and advising – the University of Zurich’s Graduate Campus supports junior researchers in a number of ways. Besides grants and a comprehensive course program, these also include making the achievements of young researchers at UZH more visible. The Annual Ceremony of the Graduate Campus last Tuesday presented an excellent opportunity to do so. The event was focused on the topic of creativity and science. “Appreciation and respect give rise to creativity,” said Ulrike Müller-Böker, Director of the Graduate Campus.

And the improv theater group “anundpfirsich” made sure that the audience was able to tap into their creative side there and then. For example, members of the audience were asked to say hello to those sitting next to them – and praise them, too. In another exercise, a woman from the audience helped the actors to solve a riddle, without speaking and only through her gestures.

“anundpfirsich” also showed simple methods that can be used to practice being creative, for example a fast-paced exercise where two people take turns telling a story together by adding one word at a time – an exercise requiring quick wits.

In her speech, Vice President Gabriele Siegert also emphasized that creativity and science go hand in hand. “Scientific progress can’t be planned in detail.” She exemplified this by telling the story of how post-it notes were invented. US chemist Art Fry came up with the idea as he was singing in his church choir. The little piece of paper he used to mark the music kept falling out, which led to his eureka moment: small adhesive notes that can be stuck on and removed from the pages!

As it happens, one of his colleagues from work at 3M had already developed the perfect weak glue for Art Fry’s idea – and put it down as a supposed failure. But now the time was right, and the post-it note went on to become a global success. Of course it also helped that the company allowed its employees to spend 15 percent of their working hours on projects of their own choosing.

Gabriele Siegert said that UZH, where the necessary expertise comes together with a stimulating international network to bring about innovation, was also an ideal place to be creative.  But creativity also requires freedom to think and time to try out new things. “We should play our part in ensuring that we can keep the freedom that makes these true eureka moments possible, especially for junior researchers,” said Siegert.

Following Gabriele Siegert’s speech, three particularly innovative UZH doctoral candidates and postdocs were presented with this year’s Mercator Award. The awards are endowed with 5,000 francs each and are presented in recognition of research that is of the highest academic quality, inter- or transdisciplinary, and relevant to society.

Immunologist Natalia Arenas-Ramirez developed a new antibody called NARA1 – named after her initials. This antibody binds to the artificial protein interleukin-2, which is used in immunotherapies to combat cancer. The NARA1 antibody prevents unwelcome side effects while strengthening the effectiveness of interleukin-2.

Theologian Christoph Heilig investigated whether the Bible can serve as a source of critical reflection on the power of the state. In his research, he looked for – and found – political criticism of the Roman Empire hidden in the writings of Paul. The Bible can therefore indeed be considered as a source for critically dealing with political power by Christians.

Economist Bruno Caprettini investigated structural change in economies and processes of industrialization, in particular. His study on the history of economics also analyzed the opposition of agricultural workers against threshing machines in England around 1830 and looked into some of the contributing factors.

Junior researchers interested in creativity training should take a look at the courses offered by the Graduate Campus. The course program includes courses on creative research and improv theater in the transferable skills section.

100 Ways of Thinking. University of Zurich in the Kunsthalle.

In cooperation with the Kunsthalle Zürich, UZH’s Graduate Campus is organizing the science festival 100 Ways of Thinking on the Löwenbräu site from 25 August to 4 November.