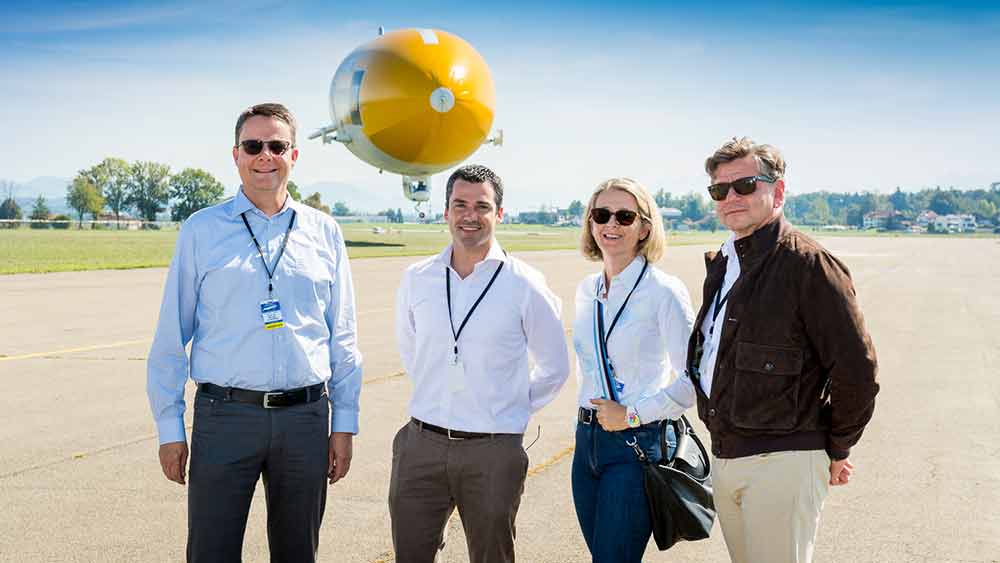 Biodiversity is on the increase, at least in homes, balconies and gardens in this part of the world. These days you’ll find Mediterranean plants in flower beds, chili plants growing on balconies, and garden seating areas shaded by banana trees in large pots. Towns and cities are becoming greener and more colorful, and home to a more diverse range of vegetation.

There are many ecological studies showing how important biodiversity is for ecosystems and thus for the environment we live in. For example the diversity of plants in species-rich forests makes them stabler and more productive, and less vulnerable to pests, protracted dry spells and fires. This means they can continue to perform a valuable role in the world, for example by regulating the climate and providing fibers (such as textiles or timber), or space for recreation.

While plant diversity is on the increase in cities, a completely different scenario is playing out in Malaysia and in other parts of the world, where biodiverse rainforests are being cleared or decimated to make way for monocultures or secondary forest. Hundreds of different animal and plant species are getting lost in the process. The next great species extinction looms – only now, for the first time in the history of the planet, it’s largely due to humans. “We have a massive influence on global biodiversity, and thus on the way it impacts the environment,” says Michael Schaepman, professor of remote sensing at the UZH Department of Geography.

The changes brought about by humans are obvious, and they’re occurring too rapidly to be captured by means of selective local data gathering in areas such as difficult-to-access rainforests. How can we even approximate scientifically the global impact of people on biodiversity?

What could one day be possible on a large scale, Michael Schaepman is doing on a small scale: On the Lägern, a wooded range of hills in the northeast of the Canton of Zurich. The plan is to use a so-called biodiversity observatory to monitor plant diversity over the longer term and measure – both on the ground and from the air – how it responds to global changes.

A major challenge when it comes to assessing global biodiversity is counting and locating the different living organisms. It’s impossible to get a complete overview of all species on earth. Even though several thousand new species are recorded every year, other species, known and as yet unknown, die out at the same time. Another problem is that there are taxonomic differences or deviations in classification for species that have already been documented: “Plants aren’t always recorded in the same way everywhere, or even at the same time, which means they don’t always have the same name,” explains Schaepman. While there are major projects under way designed to link the existing taxonomies, even interpreting names that in some cases are up to two hundred years old and only vaguely formulated requires a great deal of work. In many cases there are also multiple names for the same species.

Instead of simply counting species, the research group headed up by Schaepman is investigating the functional diversity of plants, which describes the diversity of interrelationships between ecosystems, species and genes. The group is also looking into clearly measurable plant characteristics, such as their architecture or biochemical properties. By studying these attributes, the researchers are able to draw conclusions about diversity, and for example the health of forests.

View from an aircraft

To do this the scientists deploy highly specialized equipment they have developed in collaboration with the European Space Agency (ESA) and mounted in aircraft. The equipment includes a spectrometer to measure from the air the light from the sun that hits plants and is reflected. On the basis of how the plants reflect different wavelengths of light, the researchers can determine the physiological characteristics of the leaves and the nitrogen, chlorophyll and water content. This can give an indication, for example, of the activity and health of a tree.

Forests are also scanned by laser to gain insights into architectural characteristics such as the height of tree crowns and the density of leaves and branches. The more diverse the structure of the crowns, for example, the more sunlight falls on leaves lower down the tree and the more efficiently the tree can harness the light for photosynthesis. 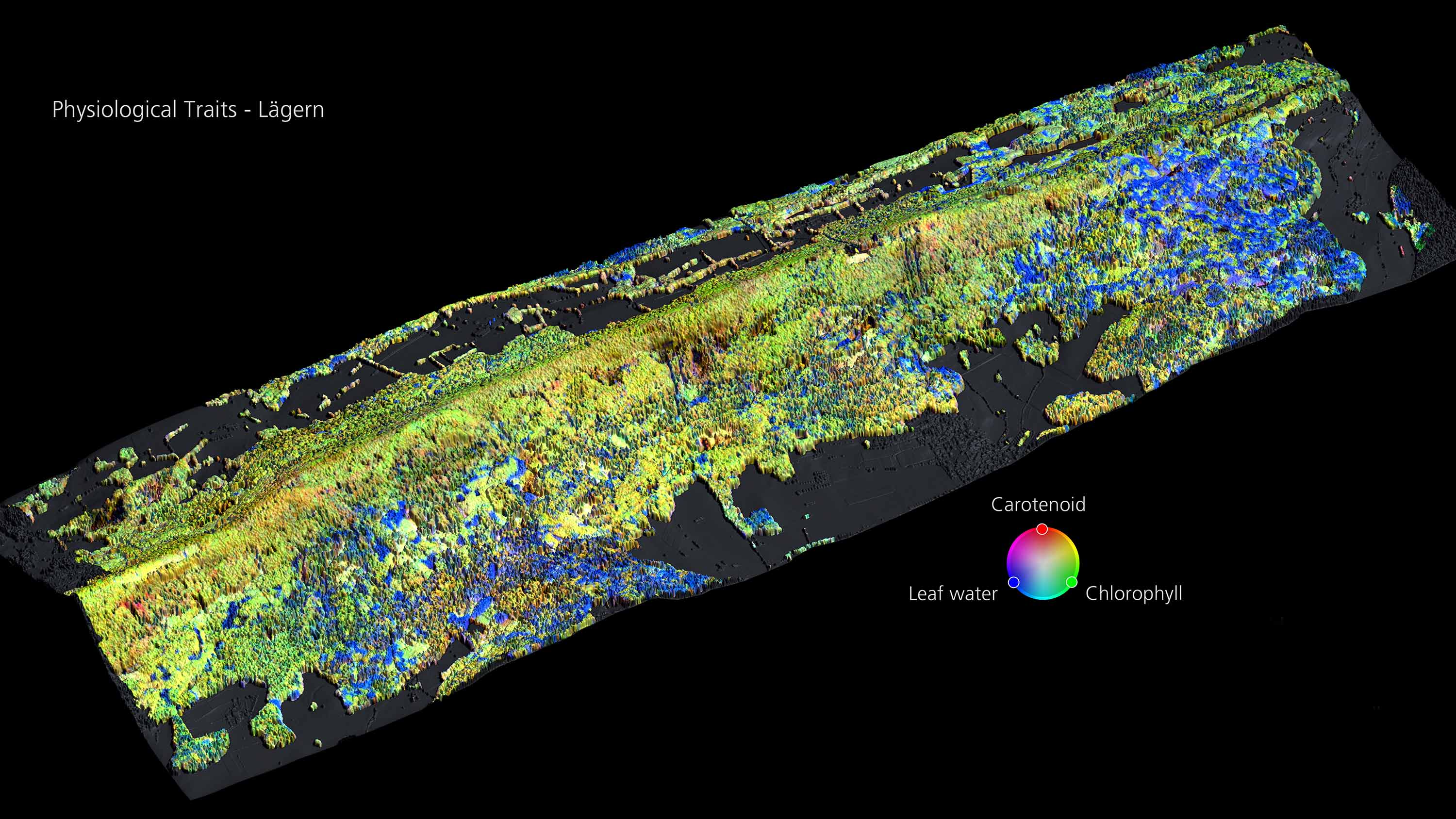 Genetics from the air

The researchers are currently working with the National Aeronautics and Space Administration (NASA) in the United States to develop an even more sensitive spectrometer. The new device is designed to use the chemical composition and the physical appearance of plants to also draw conclusions about the degree to which they are related.

“But the key to successfully measuring diversity isn’t just to study individual plant characteristics that are visible to the eye, but also to look at how they respond to changes in the environment,” explains Schaepman. Light, temperature, nutrients and the availability of water all have a strong influence on the appearance and chemical composition of plants.

This year, for example, plants on the Lägern suffered protracted shortages of water, which resulted in some beech leaves changing color prematurely. “How are you supposed to tell a computer that these differences in the measured height of plants or the water content of leaves are down to environmental influences rather than genetically determined characteristics?” asks Schaepman, before answering his own question: “With the help of genetics, of course.”

In complex computer models the researchers combine the data gathered on the chemistry of plants using spectrometry with the appearance of the plants in an attempt to reconstruct the genetic relationships for individual trees on the basis of water content, chlorophyll and the diameter of the crown. 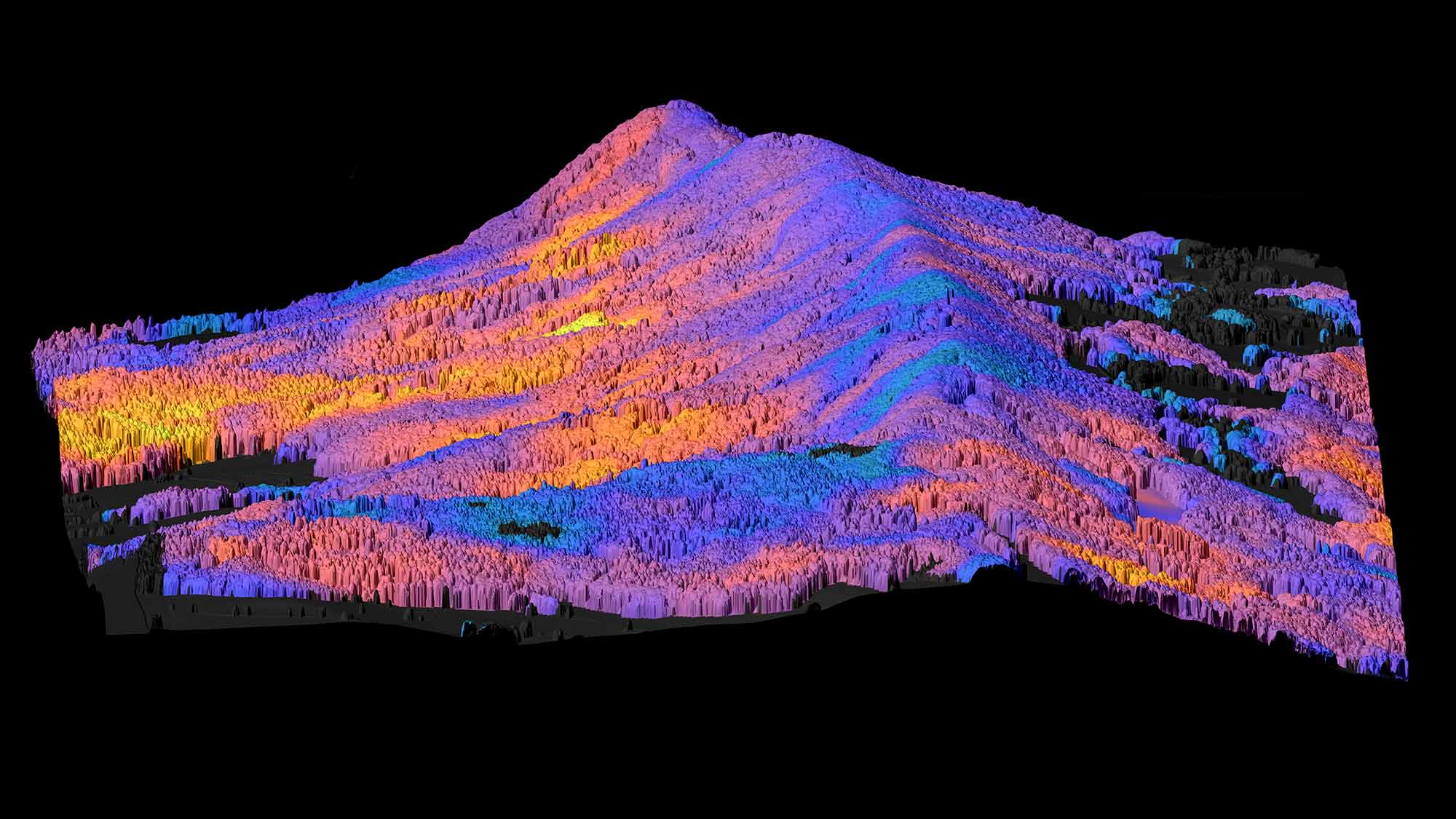 The aerial measurements have resulted in revolutionary maps of the Lägern showing the interactions in biodiversity on the basis of the physical and chemical characteristics of the plants, the development of their trunks, their relatedness to each other, and certain genetic variations within single species. Repeated measurements over a long period should then provide insights into the influence of humans on biodiversity. The data gathered in this way will be an extremely valuable complement to existing climate models that do not yet take account of biodiversity.

From the Lägern into space

The procedure continues to be tested and refined in use on the Lägern, where the scientists have already measured, sequenced, and developed detailed 3D modeling of around 1,300 individual trees. “We now know every single detail of these trees,” says Schaepman. High volumes of data have enabled sections of the woods to be modeled virtually for comparison with spectrometric data from the air.

The next step will be a control experiment where clones of these 1,300 trees are cultivated in a greenhouse to verify the propositions on the genetic diversity of plant communities. A long drawn-out process: It will take around two years before the plants are ready for the first measurement. Then they’ll be repeatedly remeasured and sequenced over a period of a further six years.

If the researchers are successful, the idea is to use the method to also investigate other ecosystems all over the world, initially from aircraft, and ultimately even from satellites in space. The scientists around Michael Schaepman are already involved in a satellite project aiming to measure biodiversity from space by the late 2020s. In the meantime the only obstacle now remaining in terms of the scalability of the methodology developed in Zurich is the availability of modern, high-resolution sensors.