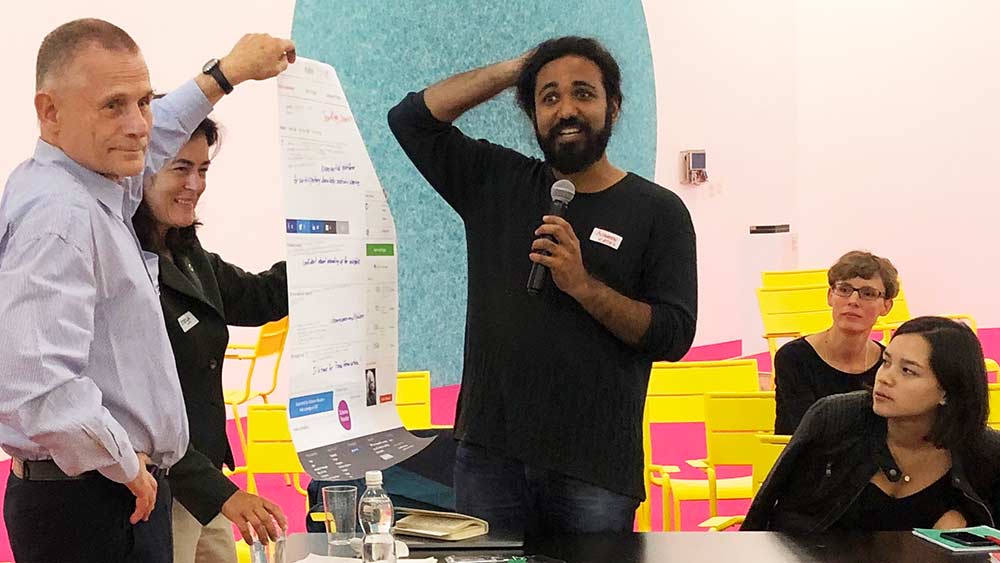 Communication as the key to success: Crowdfunding workshop at the Kunsthalle Zurich. (Image: Valeria Heintges)

The Swiss National Science Foundation (SNSF) awarded funding to the tune of 973 million Swiss francs in 2016.  Most of the projects funded received well over 100,000 francs and lasted longer than two years. However, those projects requiring less funding and that were of shorter duration received hardly any money. This is where crowdfunding – a common source of funding in the arts world but until now less widespread in science – can plug a gap.

Mike S. Schäfer, professor at the University of Zurich’s Department of Communication and Media Research, and Mirko Bischofberger and Luc Henry of the Science Booster channel of the platform wemakeit.com want to change that. To raise awareness of crowdfunding for science, they organized the Crowdfunding Science Festival 2018, which included a conference, a workshop, a party and an awards ceremony. “Science needs to find new ways to share its concerns with society,” says Schäfer. “Crowdfunding is a form of communication in which researchers get direct feedback on their work in the form of money.”

The exhibition 100 Ways of Thinking currently being staged by the University of Zurich at the Kunsthalle offered the perfect setting for the workshop, as scientists had to think “extremely creatively and freely” in order to be successful with crowdfunding, explained Science Booster founder Luc Henry in his introduction. He advised participants to present their projects succinctly and with originality so as to catch people’s attention. However, they shouldn’t neglect scientific standards such as measurability, comprehensibility and relevance. This held true even if the majority of donors were from the family and circle of friends and acquaintances. “The first few days and the closing days of a campaign are crucial,” said Henry. He recommended that in the final days of a campaign, the funding-seekers recontact those who had already donated to get their help to reach the goal.

Many of the 20 or so participants were newbies, but there were also more experienced crowdfunders present, such as Cristina Olivotto. She and the team behind FabLab On l’fait raised 12,836 Swiss francs last fall for a FabLab in Geneva – a workshop where members of the public can work with machines such as 3D printers and laser cutters. She also received an additional 10,000 francs thanks to Science Booster. With Science Booster, the Gebert Rüf Stiftung matches every franc donated up to a certain limit – previously up to 10,000, now up to 5,000 francs. The promotional video created by the FabLab group for their crowdfunding campaign was so good that it was even awarded a prize at the festival for the best visual presentation.

Other participants were completely new to the process. A big challenge for some of them was describing their research in a way that was technically correct but also understandable for laypersons. They needed to demonstrate, in as simple terms as possible, how their research projects met scientific quality criteria such as verifiability, relevance and originality. This was no easy task – it took some groups in the workshop nearly three hours to formulate the text for the various sections to be completed on the crowdfunding platform wemakeit.com, with heated discussions within the groups about what information should and shouldn’t be included.

Another challenge was deciding what sort of rewards would be appropriate to offer the sponsors in return for their donations. “That’s often the most difficult question for scientists,” said workshop leader Henry. Artists could offer a signed book or tickets to a screening of their finished film, for example. But what about academic researchers? One idea would be to offer donors the chance to observe first-hand the work in the lab, thereby giving them close-up experience of science and research. The researchers could then also explain how the donation was directly contributing to solving specific problems. For this reason, donors should also be kept informed about the progress of their project and of course about its outcome.

Crowdfunding has another use beyond just fundraising: It helps scientists to build up a sort of fan base for their work – a community of people willing to support scientific endeavor. So scientists who have raised money through crowdfunding and who later need the active participation of members of the public, whether for citizen science projects, events or other reasons, already have a core group of supporters on whom they can call.