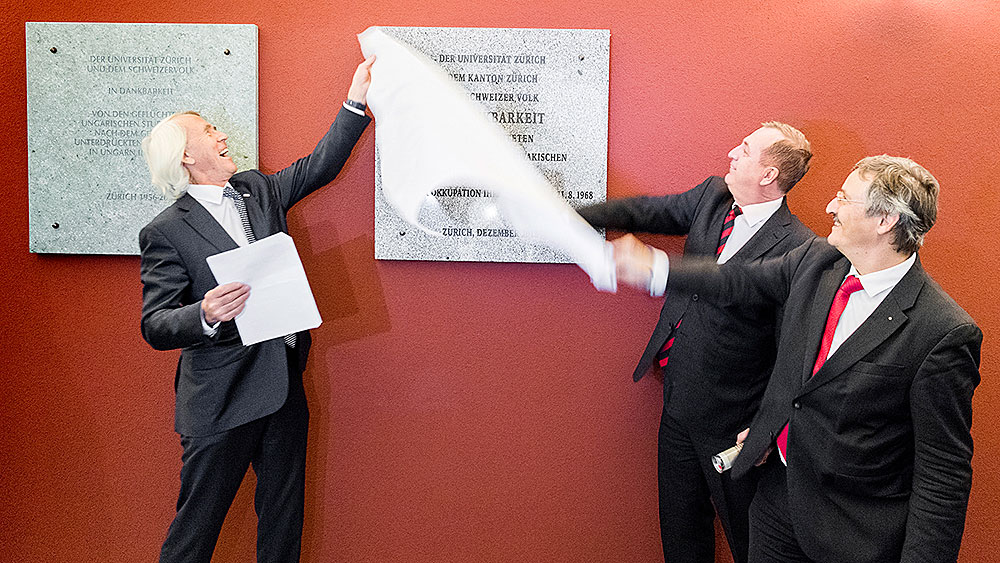 The Prague Spring of 1968 was seen by the Czechoslovak population as a glimmer of hope for independence and democracy, a “socialism with a human face”. But the envisioned reforms were rendered impossible by a brutal invasion of Soviet troops. A wave of indignation swept through Europe, and especially through Switzerland, leading to prompt declarations of solidarity with the Czechoslovak people and protests against the Soviet Union.

Shortly after these events, Switzerland opened its borders to Czechoslovak refugees. The asylum process in those days was entirely unbureaucratic and liberal and, by 1969, Switzerland had accepted more than 20,000 asylum seekers, 14,000 of whom finally settled in the country. They were treated as political refugees, and many of them found jobs and study places in Switzerland, enabling them to begin a second life in their new home.

The exhibition A Second Life: Stories of people who found a new home in Switzerland after 1968 in the UZH Lichthof recalls the fateful events. It portrays 25 individuals who emigrated from Czechoslovakia and began a new life in Switzerland. At the opening of the exhibition, Dominik Furgler, the Swiss Ambassador in Prague, reminded the audience that the people who had fled to Switzerland at the time had not only found a new home in the country, but had also made a valuable contribution to the common good.

On the occasion of the exhibition opening, Tomáš Zima, Rector of Charles University in Prague, UZH President Michael Hengartner, and UZH alumnus Jiří Dvořák ceremoniously unveiled a commemorative plaque. This plaque was the result of an initiative launched by several UZH alumni who had fled the former Czechoslovak Socialist Republic.

In his speech, UZH alumnus Jiří Dvořák recalled the efforts of the University and the Canton of Zurich to facilitate the integration of the new arrivals – with German courses and grants, for example. Before fleeing his country, Dvořák had begun medical studies at Charles University. He fondly remembered how the professors at UZH had shown great understanding for the special situation of the Czechoslovak students. “The Swiss people received us with great warmth and kindness. Today we feel at home in Zurich.”

After graduating, many of the students sought to continue their work with UZH, Dvořák said. After 1989, they went on to support the transformation of society in the Czech Republic and Slovakia, and today they actively promote the academic friendship between UZH and Charles University.

Reminder for the future

UZH President Michael Hengartner expressed how honored he felt and thanked the ex‑students from the former Czechoslovakia for their initiative. The willingness shown by UZH members at that time to support people in need filled him with pride. “The commemorative plaque is a reminder to us to not neglect our duties to society, and to protect human rights,” he added.

Tomáš Zima, Rector of Charles University, also thanked the University for accepting the students and professors who had fled. He reminded the audience that European universities had enjoyed an open exchange with each other from as early as the Middle Ages: “Students and professors were free to move between universities.” And today, too, it is an important function of universities to stand for freedom and solidarity in society. Zima also warned of populism, describing it as “the devil’s way out of democratic principles.”

The two university leaders, Michael Hengartner and Tomáš Zima, praised the long-standing friendship between the two universities, which was reinforced last year in a strategic partnership. “Charles University and UZH are ideal partners because they have much in common,” said Hengartner. Both universities are excellent research universities, engage in interdisciplinary and cross-border collaborations, are proud of their history, and are eager to contribute to the development of society. That the partnership between UZH and Charles University was already bearing fruit was proven with a joint symposium held yesterday at UZH.

In December 2017, UZH and Charles University, Prague, entered into a strategic partnership. In the first year of the partnership, seven bilateral research projects in the fields of medicine, German studies and musicology were jointly funded.

The next joint workshop will take place in Prague in December 2019. In addition, steps will be taken to promote student mobility: For example, more students will be able to complete a research internship at the respective partner university.