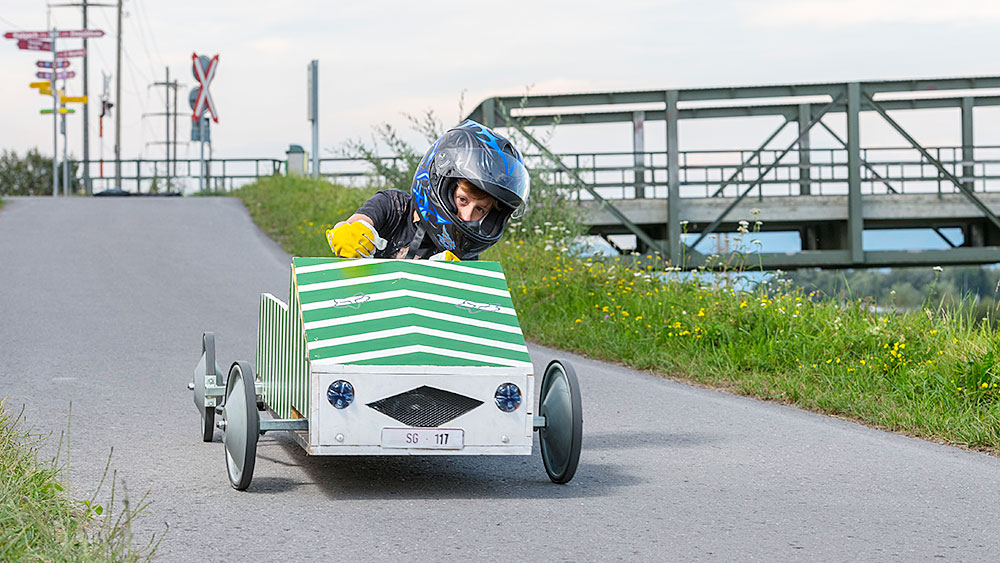 The first-born child of Nicole Spirig Walt and Thomas Walt was planned and very much wanted. Nicole was 34 when Andrin was born after an uneventful pregnancy. A healthy boy, despite his slightly below average size and birth weight. Andrin was breastfed, and he grew. For the first six months, he appeared to develop normally – until his metabolism “came off the rails.”

“Andrin started to throw up and hyperventilate,” says Nicole Spirig, thinking back to the anxious moments almost 11 years ago, when the disease first showed its face, “he was apathetic and no longer wanted to eat.” She takes him to the see the doctor, who tells her that it is a bout of gastric flu, and that her son is a bit dehydrated.

Back at home, Andrin refuses the prescribed drugs. “Then when I looked at him, his pupils disappeared. I was scared and wanted to take him to hospital.” Nicole Spirig calls her husband, who drives them straight to the cantonal hospital of St. Gallen. The mother cradles her son in her arms, talking to him constantly: “Andrin, look at me, Andrin.”

At the hospital, a blood test is performed, revealing an alarming blood count. The attending physician calls for an intensive care team. Andrin gets an injection, infusions are given, the boy is put in an artificial coma. “I stood in a corner, unable to move. I thought I’d lost my child.” Nicole Spirig hangs back, as her husband accompanies their son to the intensive care ward. “At that moment I thought my entire life was being taken from me.”

Everything's going to be all right

Andrin’s father is in the intensive care ward when the new lab results come in. The attending physician tells Andrin: “Little man, we’ve saved you.” The team cheers. “My husband came to me and said, ‘Everything’s going to be all right’,” remembers Nicole Spirig. She and Andrin are sitting in the office of Matthias Baumgartner, Director of the Children’s Research Center at the University Children’s Hospital Zurich.

Baumgartner specializes in metabolic diseases and heads up radiz (Rare Diseases Initiative Zürich), the University of Zurich’s Clinical Research Priority Program on rare diseases. Andrin is one of his patients, along with many other children with rare metabolic diseases. The boy was lucky. He survived despite having very high levels of toxins in his blood. And he also avoided suffering a metabolic seizure, which would have permanently damaged his brain.

Yet, what had actually happened? At six months old, Andrin suffered his first major metabolic crisis, caused by the metabolic disorder methylmalonic acidemia (MMA) – a rare genetic disease in which the body is unable to break down a number of vital amino acids in its cells. Andrin is unable to properly digest these building blocks of the human body, which are ingested through food and linked to form proteins.

This inability leads to a toxic build-up of methylmalonic acids in the body – resulting in the failure of organs such as the kidneys and ultimately causing the organism to collapse. If no measures are taken in time, these crises are fatal. They also often go hand in hand with a particular type of seizure which only affects those parts of the brain that control motor skills.

“That’s why many of the children who suffer a metabolic crisis end up with a physical disability. But it doesn’t affect their intelligence,” explains Baumgartner. Andrin’s disease is a typical example of a congenital metabolic disease. These diseases usually manifest at a very young age. “They’re often severe, chronic and always rare,” says Baumgartner.

Here, rare means that it affects fewer than one in 2,000 people. For MMA, this number is one in 50,000. Chronic means there’s no cure – at least not yet. Diseases such as MMA used to be fatal, with patients usually succumbing after a matter of months or a few years. Now the disease can be treated in a way that steadily increases the life expectancy of patients. Today the oldest MMA patient in Switzerland is 43 years old.

Andrin Walt is a good example of how the disease can be kept in check, provided it is diagnosed early and treated methodically. The 11-year-old is developing normally, he has no physical disabilities, and can go to school. He enjoys being in the woods, where he builds ovens that can be used to bake bread, for example, he states proudly. And he likes skiing. His hobbies also include racing soapbox cars, and he competes in races with his younger brother Mattia.

The disease requires a great deal of discipline in the daily life of Andrin and his family. This includes a strict diet: He’s not allowed to eat more natural proteins than his body can handle. He has to wake up at two o’clock every night to drink an amino acid shake, and he gets regular injections of vitamin B12. This goes some way towards activating the body’s defective enzyme, so that at least a small part of the essential amino acids can be metabolized. This is ultimately what allows Andrin’s body, which requires the amino acids in order to grow, to develop normally. “It’s turned a severe disease into a moderate one,” says Matthias Baumgartner.

Baumgartner cares for and treats children suffering from rare diseases. And he performs extensive research into diseases such as MMA. His work is based, among other things, on a database that has grown to include some 200 MMA patients from all over Europe, which allows him to follow the progress and treatment of the disease.

One of the major problems of researching rare diseases is the fact that there are often not enough study participants and data to carry out reliable studies. “If we have enough patients for clinical studies, then the pharmaceutical industry, which we rely on to have on board as a partner, will also start taking an interest,” says Baumgartner. Collaborative efforts with scientists from other fields, made possible thanks to the radiz research program, also offer a promising way forward.

“We want to improve our understanding of the disease so that we can provide targeted treatment,” says Baumgartner. He sees two ways to achieve this goal: The first one involves repairing the faulty processes in the cells that are responsible for the inability to properly break down certain amino acids. This would eliminate the negative effects of the genetic defect.

An even better solution would be to get to the root of the disease and fix the genetic defect itself. At present there is a specific gene therapy where this is possible in a mouse model, albeit so far only in the liver. “It would be crucial to also include the brain and kidneys, which are strongly affected by MMA,” says Baumgartner. If this succeeds, the disease could be largely cured.

But until this happens, MMA patients like Andrin Walt have to continue to have patience, self-discipline and a supportive environment. The Walt family didn’t go on holidays abroad for a long time. When they tried to go on holiday in Tuscany three years ago, they instead ended up in the University Children’s Hospital Zurich, at four o’clock in the morning, with Matthias Baumgartner’s team. Andrin had suffered another metabolic crisis en route to Italy, meaning the family had to drive straight back to Zurich.

Andrin has three siblings: Cellina, and Leonie and Mattia, who are twins. They’re all younger than him. Initially Nicole Spirig and Thomas Walt didn’t want to have any more children after Andrin, because they both carry the disease in their genes. This meant there was a 25 percent chance that any further children would also end up sick. But Matthias Baumgartner gave them courage. They had tests performed during each of the pregnancies to confirm that their children were healthy.

And today they’re a family of six. “The four of them fight,” says Nicole Spirig, “as siblings do.” And they go soapbox racing together. Andrin’s dream job is to be an agricultural mechanic, and he’s already taken the first step towards achieving his goal: The 11-year-old has organized a trial day in the local garage, all by himself.

Drugs for rare diseases are as rare as the diseases themselves. This has to do with the fact that the pharmaceutical industry isn’t particularly interested in developing them, since the number of patients is very limited. But there’s also often a lack of study participants and information to carry out meaningful clinical studies, which are required for developing and approving drugs. Matthias Baumgartner wants to change this, which is why he’s working together with Olivier Devuyst and Uli Zeilhofer from UZH as well as Johnathan Hall from ETH Zurich to establish the National Center of Competence in Research (NCCR) “Accelerated Drug Discovery in Rare Diseases”. A submission to the Swiss National Science Foundation is currently being prepared.

The goal of the NCCR is to pull together basic research and clinical practice. “We want to join forces with chemists, for example, who can help us look for the right molecules to treat rare diseases,” says Baumgartner. “I know what the problems are, but I often lack the tools to examine them.” Baumgartner is already in contact with Cristina Nevado, who’s a professor of chemistry at UZH: “Both sides stand to benefit a great deal from this collaboration.”