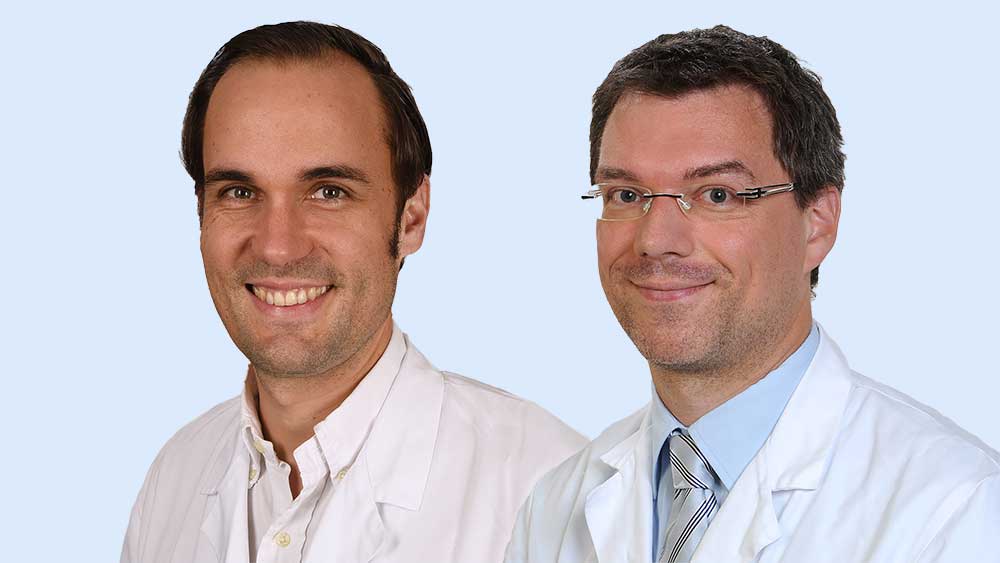 Winners of the Georg Friedrich Götz Award of the UZH Faculty of Medicine: Johan Lorenzen and Michael Scharl.

Johan Lorenzen’s outstanding scientific work and successful career achieved at the young age of only 37 were what impressed the award committee. His area of specialization is microRNA with a focus on diseases of the kidneys. He elegantly combines biomedical basic research with finding solutions to important clinical problems. Among other things, he recognized the great significance of microRNA-24 in renal reperfusion injury and acute kidney failure.

Johan Lorenzen was born in New York City in 1980. He studied human medicine at Hannover Medical School (MHH), then completing his clinical resident physician training in internal medicine and nephrology at Hannover Medical School and gaining the title of medical specialist (Facharzt) in internal medicine and nephrology in 2016. He obtained his habilitation at MHH in 2011 and in 2016 was promoted to extraordinary professor. In November 2016, he moved to the UniversityHospital Zurich where he currently works as attending physician and research group leader at the Department of Nephrology.

Johan Lorenzen has published many papers and won several scientific awards, including the Dr. Werner Jackstädt Award in 2016.

Michael Scharl ranks among the world’s leading scientists for his research into the role of protein tyrosine phosphatases in the occurrence of chronic inflammatory bowel diseases and the molecular mechanism of fistula formation in patients with Crohn’s disease. He is head of research at the Department of Gastroenterology and Hepatology at USZ as well as a member of the clinic management team. Since August 2017, he has held the UZH Peter Hans Hofschneider endowed professorship for biomedical research at the Department of Gastroenterology and Hepatology.

Michael Scharl studied medicine at the University of Regensburg. From 2007 to 2009 he was a postdoctoral researcher in the laboratory of Kim E. Barrett at the University of California, San Diego. In May 2009, he joined the Department of Gastroenterology and Hepatology at USZ on a research fellowship, and since November 2011 he has been an independent research group leader. He obtained his habilitation at the young age of 30.

Scharl has already published well over 100 PubMed-listed papers in renowned journals such as the Journal of Clinical Investigations, Gastroenterology, GUT, Autophagy, and Mucosal Immunology.  The 36-year-old researcher has received several awards for his previous work, for example the 2008 AGA Fellow Travel Award, the Rising Star Award of United European Gastroenterology, and the research award of the Swiss Gastroentological Association (SGG).

The Georg Friedrich Götz Award is awarded annually to two researchers who are habilitated at the University of Zurich and can demonstrate outstanding, internationally recognized achievements in the area of basic or clinical research. The award founder Georg Friedrich Götz was born in Germany in 1893 and moved to Switzerland in 1960, passing away in 1970. The entrepreneur had to travel to Zurich several times for operations, including for lung cancer and for bowel disease. In gratitude for the care he received, he started a foundation at the University of Zurich which awards the prize for progress in medicine each year. The award comes with prize money of CHF 30,000.

As well as the Georg Friedrich Götz Award, the 2018 Hartmann Müller Memorial Prize was also awarded at this year’s Day of Clinical Research. The prize went to Jeffrey D. Rothstein of the USA. Rothstein is a leading scientist in the field of amyotrophic lateral sclerosis (ALS), an incurable neurodegenerative disease which leads to the death of nerve cells responsible for voluntary movement. Rothstein is professor and head of the leading ALS research center at John Hopkins University Medical School in Baltimore, USA. The board of the Hartmann Müller Foundation chose to award Rothstein above all for his unique excellence in both basic and clinical aspects of ALS research and for the integration of the pathophysiology of glia cells.