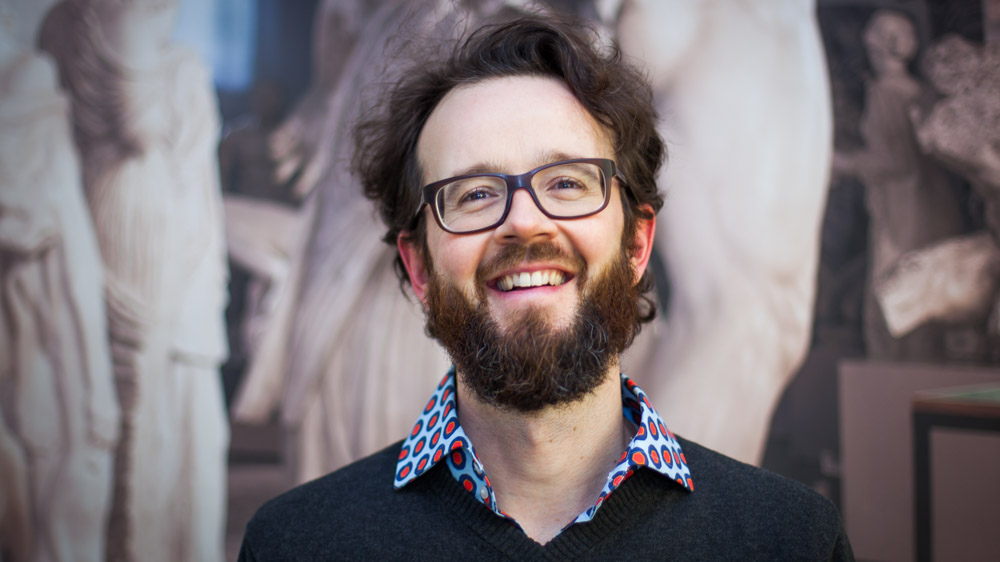 Mr Siegfried, you are a real-estate businessman and at the same time you are studying philosophy at UZH. What led you to philosophy?

Urs Siegfried: I like my job, but that alone was not enough for me. The freedom of thought that philosophy offers appealed to me.

And has studying philosophy lived up to your expectations?

Siegfried: More than lived up to them. I was hooked from the very first seminar. Practicing philosophy means pushing the limits of your own imagination with thought experiments. It means looking again from different angles at that which you think you know. I had already studied history and business administration, this is my second time at university and it has enormously enriched my life.

What is the most important lesson you’ve learned?

Siegfried: That if a philosophical line of thought at first seems strange, you need to put aside your reservations. An open-minded attitude is harder work than an attitude that immediately looks for errors, but it is also more rewarding. If your instinctive reaction is to be critical of unfamiliar ways of thinking instead of making an effort to try and understand, you may well be able to stay in your comfort zone with your preferred thinking patterns, but you will often miss out on the best. Being too quick to criticize is like wearing blinkers.

Which are your favorite philosophers?

Siegfried: Simone de Beauvoir, David Hume, John Stuart Mill, and one who I return to again and again, Plato. What fascinates me about Plato is his use of dialogue. Plato shows the immense potential of dialogue.

What makes for a good philosophical conversation?

Siegfried: A good philosophical conversation begins with all parties listening carefully, connecting, asking questions, trying to understand. That awakens the thought process, and the participants become open to new points of view. Doors are unlocked, whole rooms open up. The opposite of such a conversation is when the two sides bombard each other with their firmly held convictions. True dialogue has a hard time in the modern public sphere. We are encouraged by social media to air our prejudice-laden opinions like animals scent marking. The aim of the philosophy festival is to contribute to creating a more open culture of dialogue.

As the festival organizer, how do you find time for studying as well?

Siegfried: Well, I did have to skip classes last semester – the organization of the festival took up all my time.

The Zurich Philosophy Festival lasts three days and includes almost 30 individual events. What motivated you to organize such a big event?

Siegfried: I simply wanted to share my passion for philosophy. I wouldn’t have dared to do it on my own – but I got together with two comrades, the philosopher Jonas Pfister, who is the philosophical brain behind the event, and the Zurich councilor, communications specialist, and author Matthias Wiesmann. The three of us developed the concept for the festival and got it up and running.

Does one earn any money from organizing a philosophy festival?

Siegfried: We’re doing it voluntarily, we don’t earn any money from it.

The motto of the festival is “Vom Turm zur Tat” – you want to get philosophy out of its academic ivory tower and onto the street. Why?

Siegfried: Philosophy is too important and too valuable for it only to be practiced in academic circles. Thinking is part of our reality, and through the way we think and talk about our society we also help to shape it. The festival invites us to examine our conventional thought habits and to break away from our well-trodden lines of thought.

What kind of people are you hoping to attract to the festival?

Siegfried: The festival is for anyone who is ready to listen and have fun with thinking. There’s no need for any particular academic level. The festival is intended to be both simple and challenging – it should be entertaining and at the same time philosophically full on.

Simple and challenging at the same time – how will you manage such a balancing act?

Siegfried: Firstly, we have chosen topics that are closely related to everyday life and affect everybody. The theme is “Me, Me, Me.” What topic could be closer to us than ourselves? Secondly, we have chosen a mix of speakers to include experts and faces the audience will recognize. So we’ve got well-known personalities such as the writer Philipp Tingler, the journalist Michèle Binswanger, the psychoanalyst and columnist Peter Schneider, and the actor Mike Müller, alongside experts in their fields such as Gianfranco Soldati from Fribourg and Susanne Schmetkamp from Basel, as well as several UZH staff including Jürg Berthold, Christoph C. Pfisterer, and Dominique Kuenzle. Thirdly, the hosts, most of whom have appeared as hosts on the TV program Sternstunde Philosophie, have been carefully hand-picked to bring both journalistic flair and proven philosophical knowledge.

Siegfried: Of course. Many of them are also volunteering at the festival.

The Zurich Philosophy Festival is sponsored by UZH. It will take place from 18-20 January at the Zurich cultural venue Kosmos (Lagerstrasse 104) with a packed program of discussions, lectures, films, and slam poetry performances all revolving around the theme “Me, Me, Me.” Many UZH researchers, teachers, students, and alumni are involved. On the “Arena” stage, prominent guests will engage in verbal combat. In the “Academy”, experts will hold in-depth conversations. And in the “Salon”, philosophers will be on hand to give information about selected topics such as truth, death, art, and feminism. In addition, short animations about philosophical thought experiments will be screened with commentaries by experts from the UZH Advanced Studies in Applied Ethics course.

Urs Siegfried studied history and business administration in Zurich and Lausanne. In his business career he worked, among other things, as managing director of the St. Gallen radio station toxic.fm and led the Zurich association for fair and environmentally-aware home-owners. He currently works in real estate alongside studying philosophy.