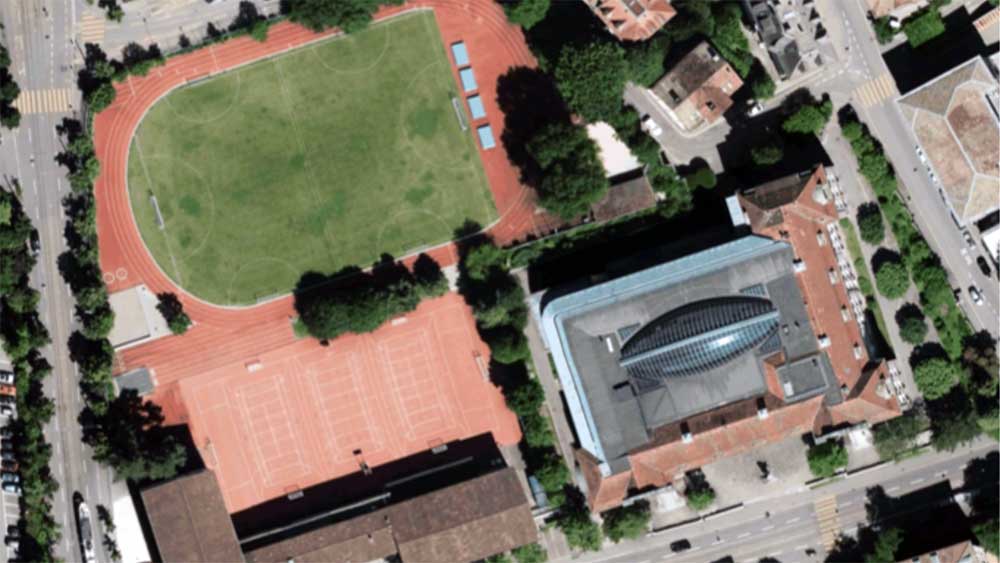 A future focal point of UZH: The planned FORUM UZH will be built on the Wässerwies site on the corner of Rämistrasse and Gloriastrasse.

The University of Zurich is developing its City Campus. The FORUM UZH, the new large teaching and learning center on the Wässerwies site, will be a focal point of UZH’s City Campus. The center will be open to members of UZH, ETH Zurich and the UniversityHospital Zurich, with some areas also open to the public.

The FORUM UZH will be built at the corner of Gloriastrasse and Rämistrasse, a site currently occupied by a few gymnasiums and a sports field. The planned center will include a central library, various teaching and event rooms, cafeterias, shops and sports facilities. It will be an attractive meeting point for students, providing a variety of spaces for innovative teaching and learning. At the same time, the site is designed to be a public space: It will be able to host a number of public events, such as the Children’s and Senior Citizens’ University or Scientifica events.

As a modern counterpart to the opposing historical main building of UZH, the FORUM UZH is sure to breathe life into the future university area. The building project is being pushed ahead with great priority, with operations planned to start from 2025 onwards.

The project competition for the FORUM UZH had two phases. In the preselection phase, teams of architects from Switzerland and abroad applied for a place in the formal architectural competition. In the second and main phase, the teams that had been deemed suitable and admitted to the competition by the jury each developed a draft, which they submitted anonymously on 8 August. The jury has now announced its decision: The competition was won by a general planning team including the renowned architecture firm Herzog & de Meuron Basel Ltd. as well as b+p baurealisation ag.

Held at the same time as the competition for the FORUM UZH, proposals for the UniversityHospital Zurich’s main site (“USZ Kernareal”) were reviewed as part of the planning of the Zurich City University District. The winning submission was that of the general planning team BERTHOLD Christ & Gantenbein / b+p baurealisation ag, which  will thus be in charge of the first major stage of the complete renovation of the UniversityHospital Zurich.

The juries will draft their final reports over the next few weeks. In addition, detailed clarifications and visualization work will be made for the upcoming public exhibition about the Zurich City University District (HGZZ), which will open on 8 January 2019 with a media conference in the Amtshaus IV in Zurich. During this conference, the City and the Canton of Zurich as well as the UniversityHospital Zurich (USZ), UZH and ETH Zurich will present what the university will look like in 10 years. USZ and UZH will take this opportunity to present the two winning projects. The latest developments in the urban space concept and the HGZZ white paper will also be included in the exhibition.

From lunchtime on 8 January 2019, all of the projects entered into the FORUM UZH competition will be on public display in the Lichthof in UZH’s main building. USZ will also display all of the submitted proposals in the entranceway of the NORD2 tract from this date.