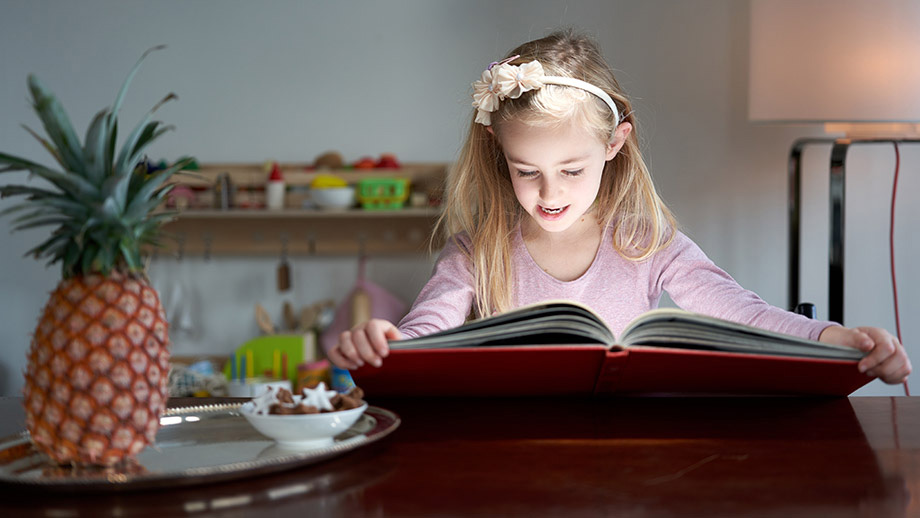 When children read the story of Snow White and the seven dwarfs, their brains really get fired up. However, it’s not the little fairy-tale creatures stoking the fire, but a complex neural network that is activated in the brain.

Silvia Brem researches what happens in children’s brains when they are learning to read. The assistant professor of cognitive neuroscience in children and adolescents wants to find out how the brain activity in children with reading difficulties differs from children who learn to read and write without any problems. This knowledge should make it possible to recognize reading difficulties at as early a stage as possible and thus support the children affected.

Taking images of the brain

Her brown curls bouncing, the young girl – let’s call her Adelaide – rushes into the examination room. At first glance you might think she was paying a visit to Mary and Joseph in the stable in Bethlehem. The building is actually a former stable, situated in the extensive grounds of the University Hospital of Psychiatry Zurich. But inside it are not donkeys and oxen, but up-to-the-minute medical equipment and blinking computer screens. Eleven-year-old Adelaide already knows the drill – she was five the first time her brain was photographed, and the second time she was seven years old. Adelaide is taking part in a long-term study led by Silvia Brem and her research team.

When Adelaide was little, a PhD student sat with her and showed her a picture book in which Lexi the bear explained how the examination worked. First she has to put on what looks like a swimming cap with cables that measure when the nerve cells in the head are active. The MRI scanner then takes pictures of her brain while she completes certain tasks and watches a film. As a reward at the end she is allowed to choose a treat from a treasure chest, some lego or a necklace for example. Now she is older, Adelaide usually chooses a book token.

Dyslexia, or difficulty with reading and writing, is usually spotted when a child is in 2nd grade or thereabouts, but is sometimes not picked up until years later. For children suffering from dyslexia, reading is hard work – the story of the seven dwarfs comes out slowly and haltingly, while their classmates are pages ahead and across the seven mountains already. A problem of this kind usually means reading fluency is reduced, and it is therefore difficult for the children to actually understand what they are reading. Spelling often also becomes a problem, but it can be the case that a child finds reading difficult but can spell correctly.

It can be very frustrating when a young child, full of enthusiasm for their newly learned ABCs, faces such obstacles for the first time. It also affects their sense of well-being: Schoolchildren with dyslexia can develop emotional and mental disorders as well as psychosomatic illnesses. They often have a difficult time at school and also later on in their careers, and may suffer from their difficulties all their lives. But dyslexia has nothing to do with intelligence.

Well-known figures have suffered from the disorder, including the Swiss winner of last year’s Nobel Prize for Chemistry, Jacques Dubochet. It is also said that Albert Einstein had a reading and writing disorder. In Switzerland, at least one child per school class is affected by dyslexia. Silvia Brem and her research group specialize in work with children and adolescents. She wants to understand what happens in the brain of a child with a reading disorder, so that the problem can be diagnosed early. Those children can then be supported as effectively as possible with specific training methods. Children’s brains already begin developing reading and writing skills at preschool age. That means that differences in the brains of young children who will later go on to develop problems with reading can already be seen when they are doing language-related tasks.

The playful nursery rhymes and phrases that children hear from a young age, such as “rain rain go away, come again another day”, help the brain make connections between sounds, and give children a feel for the language. Other techniques to improve reading ability are clapping out the syllables and reading words out loud backwards. “Children with dyslexia have less awareness of the phonetic structure of the language,” explains Brem – they might not connect the rhymes. Difficulty associating the letters with sounds can be a problem – this ability is necessary for fluent and automatic reading.

In the exercise used to diagnose dyslexia, children have to quickly name animals, characters, objects and colors. The act of quickly recalling the name of an object and saying it out loud is similar to the process of reading. Such tests can predict later reading development, but these assessments are rather imprecise. This is where Brem’s research comes in. What happens inside little children’s heads when they read stories about Peter Rabbit, the Mister Men or the Gruffalo?

Silvia Brem’s research group uses brain imaging techniques to show how the brain processes written words. Information is recorded about the brain activity – when, for how long, and in which region of the brain it takes place. While the child is in the MRI scanner, words are shown on a video headset: Sea, tree, bear. The brain always has two options when reading, explains Brem. Either it recognizes a word directly or it has to split the word up into individual parts and decode it – which accordingly takes longer. But when a new word has been decoded a few times, the brain will start to recognize it directly.

When Adelaide lies in the MRI scanner with the funny swimming cap on and reads the word “bear” on the screen, the researchers can find out how her brain processes the word. If the child first has to decode the word, the main activity takes place in the frontal lobe. If she recognizes the word directly, the visual word formation system – the name of the system that enables us to read fluently – is activated. In children with dyslexia, who generally read slowly and haltingly, this part of the brain plays less of a role, meaning the frontal lobe has to work harder.

Adelaide has spent a lot of time gaming since the last session. Not just any old computer game though – the game she plays is called GraphoLearn and was developed by Brem with a research group from the University of Jyväskylä in Finland. The initial assessment showed pleasing results. Even after only eight hours of training, users could read made-up words more accurately. Brem is conducting more detailed research into the training effect in order to fine-tune the game.

The appointment over, Adelaide comes out of the old stable and heads home – rucksack with school books on her back, mobile phone with reading app in her pocket, and a shiny new book token in her hand.

The research team are still looking for participants for the LeselernApp study. Children with German mother tongue who are in 1st to 3rd grade or 5th grade can take part. For information on the study and to register go to: www.lexi.uzh.ch

How the Brain Reads

When we read, a neural network is activated consisting of three regions of the brain that interact with each other. It is located in the left, language-dominant side of the brain.

When children develop language and reading skills, the language dominance in the left side of the brain increases. As soon as children begin linking language with written signs, a region of the brain dedicates itself to quickly recognizing whole words and automatically processing them. This process takes place in the area called the occipito-temporal system in the visual word form area, which makes fluent reading possible. In children with dyslexia, this area develops more slowly and probably continues to be less efficient in adulthood.

Another region of the brain, the temporoparietal system, plays a key role in processing language sounds. This is where letters are connected with sounds and the meaning of words is recognized.

Finally, in the inferior frontal system, the motor function and articulation required for speaking is controlled and planned. This brain region is often also active in dyslexic people when they are reading, as people with reading difficulties may silently say the words to themselves.