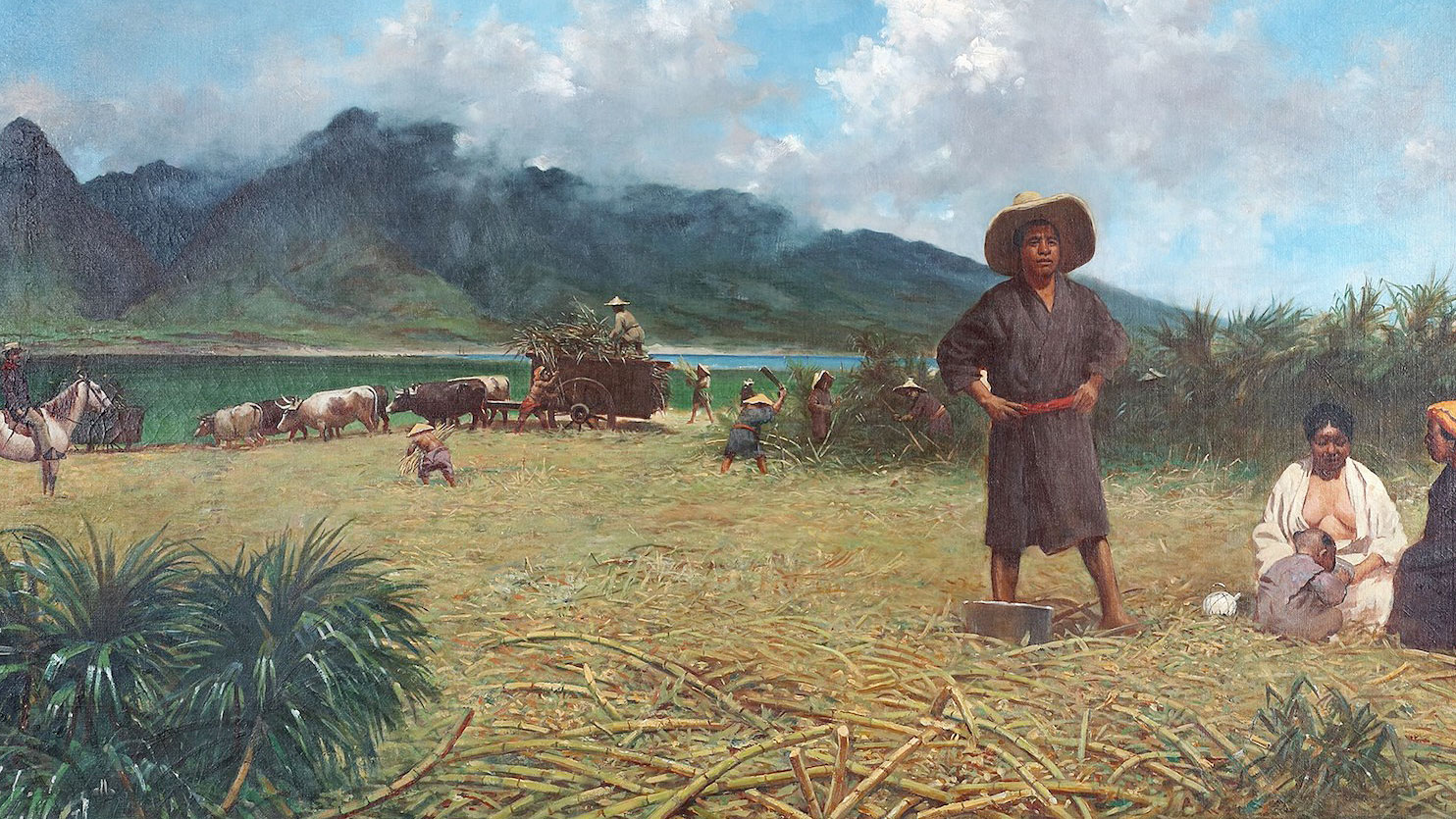 David Kalākaua was concerned: The King of Hawai’i urgently needed laborers. Around 1880, his kingdom of Hawai’i was in the midst of economic upheaval. The sugar plantations in particular required more labor than was available on the islands. The King’s Foreign Minister agreed a program with the Japanese government, and in 1885, the first two ships carrying Japanese laborers arrived in Honolulu.

To ensure a steady supply of workers to his kingdom, King Kalākaua wanted to show the Japanese emperor that the Japanese workers were treated well in Hawai’i. He thus commissioned US artist Joseph D. Strong (1853-1899) to make a painting of Japanese workers on a sugar plantation.

But this intended gift never reached the imperial household. Instead, the monumental oil painting Japanese Laborers on the Sugar Plantation in Spreckelsville, Maui (1885) went from one private collection to the next in the following 130 years. And now, for the first time, it is being displayed outside Japan as part of a new exhibition in the Johann Jacobs Museum, “A Painting for the Emperor. Japanese Labourers on Sugar Plantations in Hawai’i”, which runs from 8 February until 31 May.

From book to exhibition

The exhibition is co-curated by UZH’s Hans Bjarne Thomsen, professor of East Asian art history, and Martin Dusinberre, professor of global history, as well as students and researchers from both professorial chairs. In the past few years, Martin Dusinberre has focused his research on Japan’s engagement with the outside world in the late 19th century, including transpacific migration.

The idea for the exhibition emerged from discussions with Hans Bjarne Thomsen and the Johann Jacobs Museum on the topic of Japanese and global art history. Researchers from both chairs then viewed and assessed photographs, pictures, and texts, and thus helped shape the exhibition. “It’s a very interdisciplinary project that combines elements of art history, history, anthropology, and museum studies,” says Hans Bjarne Thomsen.

The exhibition aims to reconstruct the painting’s historical context and the lives of its protagonists. At the same time visitors can gain insights into the late-nineteenth century world of the Asia-Pacific region, a world that was transformed by the emergence of Japan as an international power. This was made possible by the Meiji Restoration, a revolution in 1868 that restored imperial rule to Japan and abolished samurai rule. On the occasion of the 150th anniversary of the Meiji Restoration, the exhibition also aims to look back on Japan’s entanglement with the Pacific region – both through its workers and goods, and also through the image that Japan wanted to project overseas.

In addition to the painting, the exhibition features a two-meter long model of the ship that brought Japanese workers to Hawai’i. Photographs taken by German physician Eduard Arning of the Japanese workers arriving in Honolulu are also on display. Arning’s photos are closely connected with the oil painting of the plantation workers: As UZH Master’s student Christina Wild was able to show in her research, the painting doesn’t show a real scene on the plantation of Spreckelsville, but was largely modelled on photographs taken by Eduard Arning.

Exhibition "A Painting for the Emperor. Japanese Labourers on Sugar Plantations in Hawai'i"

The exhibition in the Johann Jacobs Museum runs from 8 February until 31 May 2018.