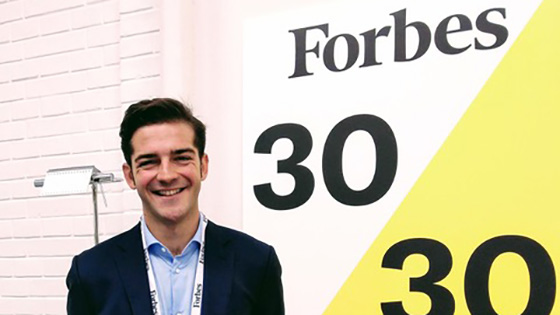 Recognition for his daily work: José Parra Moyano at the awards ceremony in Vienna. (Picture used with permission)

Based on his CV, you’d think José Parra Moyano would be older than he is: The 27-year-old has studied abroad, worked as an economic advisor, founded a start-up business, published several scientific papers, run two marathons, and also found the time to get married.

The young Spaniard, who is completing his doctorate under Professor Karl Schmedders at UZH’s Department of Quantitative Business Administration, has just been included in the 30 under 30 list of the German-language version of Forbes Magazine. The prestigious business magazine’s list recognizes talented figures from all kinds of fields who “with their actions change the world”.

“Sensational,” is the word that Parra Moyano uses to describe this honor. He sees his inclusion as “recognition for the daily work that as a researcher you often do out of the public eye.” Parra Moyano has spent the last two years working towards his doctorate on the topic of blockchain mechanism design.

He investigates how the promising technology of the future can be applied in practice and cooperates with companies to develop processes that can be accelerated, improved or made more secure using blockchain technology.

For example, if business clients want to open a bank account, they first have to go through a comprehensive assessment. They have to prove what their business activities are, whether they operate abroad, where the money comes from, and so on.  This process has to be repeated for every bank that the company has business dealings with. So if a company works with five banks, it therefore also has to go through five assessments. For a business, this is a very time-consuming process, and for banks, it is associated with considerable costs. These costs however cannot be avoided through conventional methods – since banks aren’t keen to disclose sensitive data and thereby relieve their competition of the costs of carrying out the assessment.

Creating a system of incentives

In two papers, Parra Moyano has developed a process that prevents these high system costs with the help of the new technology. Data from the first assessment is stored in a blockchain. This means that once it has completed an assessment the business can also open an account at all other banks, without having to be assessed again. “The key is to create a system of incentives where everybody benefits,” says Parra Moyano. This is why the blockchain process also includes a compensation system, in which all other involved banks repay the first bank for having borne the assessment expenses.

There has been quite a hype about blockchains recently, making sober and objective analyses like the ones Parra Moyano describes in his papers particularly useful. “Everybody knows that the technology is coming. But we’re still experimenting with it and don’t yet know where it can be put to good use,” says Parra Moyano. He compares the situation to that of laser technology, which emerged in the 1960s. Back then it took 30 years to find useful applications for the new technology – laser printing, in particular. “Blockchain is a great solution in search of a problem,” says Parra Moyano, citing an industry witticism. Through his research, he is playing a part in helping the blockchain technology find the problem that it can solve – like the laser eventually did.

Another reason why Parra Moyano, who learned German at the Swiss School in Madrid and came to Switzerland at the beginning of 2009 to take up economics studies at UZH, made it onto the Forbes list is the start-up business Lionstep, which he founded while also working towards his doctorate. The fledgling business develops algorithms for use in staff recruitment.  At the moment, however, Parra Moyano is taking a back seat in the start-up and is instead entirely focused on his work at UZH. In the Fall Semester, he will also take on tasks in teaching.

Parra Moyano doesn’t yet know whether he will stay in academic research after he completes his doctorate, which will take another year or two. Nor does he know whether he’ll remain in Zurich for the long term. However, he’s resolved to face these questions in the near future. But one thing’s for sure: “I work in an industry that is developing at a very high rate. I have to develop along with the situation.”