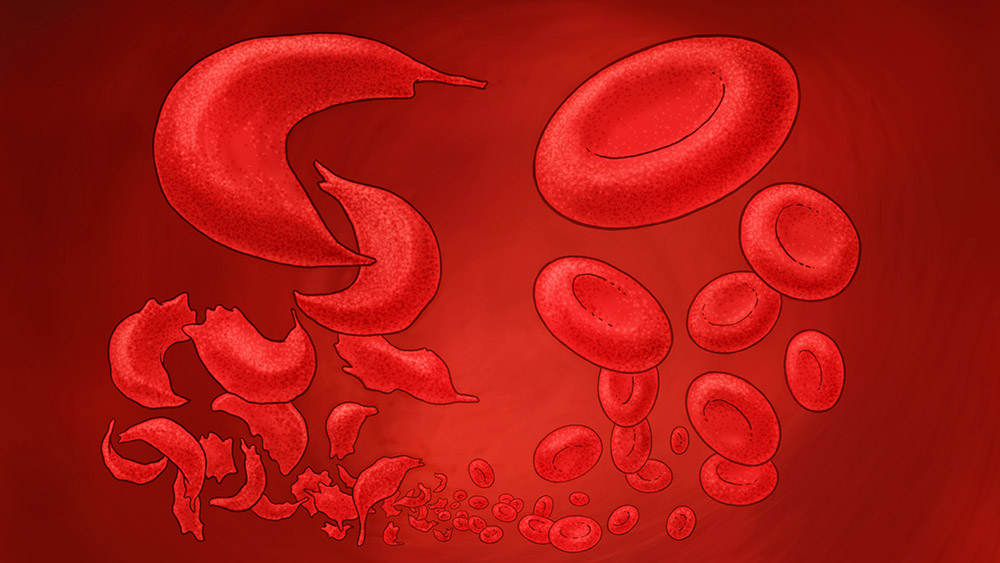 Sometimes drugs are effective in treating diseases other than the one they were developed for. This may soon be the case for anti-Alzheimer’s drug memantine. UZH professor Max Gassmann and his team have discovered that it is also effective against sickle cell anemia. The veterinary physiologists, together with medics from UniversityHospital Zurich, have already treated their first patients – successfully.

In patients with sickle cell anemia, the gene that contains the inherited information for hemoglobin is different. As a result, the hemoglobin crystallizes and the normally round red blood cells become sickle shaped. This can lead to clotting and thrombosis. The transportation of oxygen in the blood is also restricted and patients suffer from anemia.

Around 25 million people worldwide are affected by the disease – mainly in sub-Saharan Africa and Asia, but also, as a result of migration, increasingly in the USA and Europe. It is estimated that around 220 people in Switzerland have the disease, and this number is increasing.

In developed countries, life expectancy of sufferers is 40 to 60 years. In Africa, however, people with the disorder usually have a much shorter life expectancy: “50 to 80 percent of babies born with sickle cell anemia die before they are five years old. Adolescents and pregnant women are also particularly at risk,” explains Max Gassmann. He is Director of the Institute of Veterinary Physiology and of the Zurich Center for Integrative Human Physiology (ZIHP) at UZH. His research focus is oxygen deficiency.

The researchers discovered the sickle cell anemia link by chance: Asya Makhro, then a doctoral candidate under Max Gassmann, and their colleague Anna Bogdanova tested whether and how the neurotransmitter glutamate can damage heart cells. Glutamate stimulates NMDA receptors on the heart cells which can damage the heart. The heart then transports less blood and thus less oxygen.

The young researcher carried out the tests on a rat that was connected to a heart-lung machine. In the control test, she added a few milligrams of memantine in order to prevent the glutamate from binding to the NMDA receptors.

Excess glutamate leads to cell damage through binding to NMDA receptors in the blood, and memantine prevents this from happening. “No one realized that there were NMDA receptors on the red blood cells. We only knew about them on nerve and heart cells,” says Max Gassmann. “We then tried to demonstrate that the receptors also exist in human blood. When we managed to do this, we published our findings immediately.”

Full of curiosity, the researchers tested the effect of memantine on blood samples with diseases relating to hemoglobin, including those from patients with sickle cell anemia. Et voila: With the addition of memantine, the blood cells changed shape considerably less. “We realized that with memantine, it would be possible to help many people affected by sickle cell anemia,” recalls Max Gassmann.

People with sickle cell anemia suffer from extremely painful episodes called hemolytic sickle cell crises, in which their blood cells break down very rapidly. These crises can be caused by physical exertion, infections, or mental stress. A typical symptom in babies is the swelling of the wrists and ankles as clotted sickle cells block very narrow capillaries and the blood vessels become enlarged. This can result in heart failure or failure of other organs such as the brain, the kidneys, or the spleen. The consequences can be strokes, heart attacks, and multi-organ failure, even in young people.

Treatment of the disease is limited to alleviating symptoms with morphine, anti-inflammatories, blood transfusions, and the preventive drug hydroxyurea, which improves the oxygen take-up capacity of the blood cells but often has side-effects. The only possible cure is an allogeneic stem cell transplant. However, this extremely expensive intervention is also very high risk, and it is often hard to find a suitable donor.

One year ago, Max Gassmann, together with the biophysicist and physiologist Anna Bogdanova and hematologist Jeroen Goede, conducted an initial patient study on memantine.

“Our goal was to determine the preventive effect of memantine on sickle cell anemia and how well it could be tolerated,” explains Max Gassmann. Both were confirmed: The subjects were able to tolerate the drug well and over the course of 12 months during which they took memantine daily, they had better blood values with fewer sickle blood cells than before, had fewer hospital stays and needed fewer blood transfusions. After they stopped taking the drug, these positive effects disappeared, demonstrating memantine’s preventive effect.

Memantine has already been on the market as an anti-Alzheimer’s drug for over 15 years. “The situation is ideal,” believes Gassmann, “as we know from the experience reports that the drug is well-tolerated and has few side effects. It is also extremely cheap to produce and easy to store and transport.” One disadvantage, however, was that the product’s patent protection had expired long ago, which meant that Gassmann was unable to find a pharmaceutical company or other investor willing to cooperate with him on the next stage – the clinical phase IIa/b study which is very cost-intensive. In this phase, the effects, safety, and ideal dosage of the drug have to be tested on a large number of patients.

Gassmann, together with the UZH Foundation (see box), is therefore currently seeking donors for the study, which is already underway. His vision is to be able to save the lives of 7.5 to 15 million people in Africa, Europe, and North America by 2050 – with one little pill per day.

Three million francs are needed for the phase IIa/b study to test the effectiveness of memantine against sickle cell anemia. The UZH Foundation helps researchers to find donations from foundations, companies, and private individuals. One million francs have already been collected thanks to the support of three Swiss foundations, with two million still to be found.